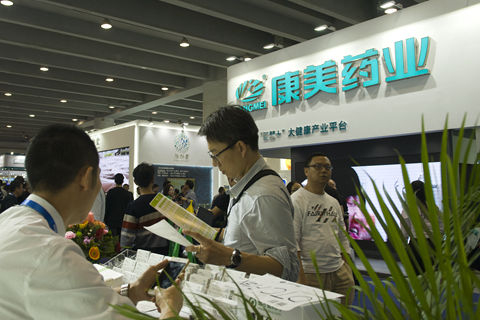 As of Tuesday, Kangmei had a total of 21.65 billion yuan of outstanding bonds. Photo: VCG

An embattled Chinese pharmaceutical company on the verge of defaulting on almost $300 million of bonds was able to retire the debt thanks to pressure from the local government on the company’s hospital customers.

Kangmei, which has been implicated in a series of bribery scandals involving local officials, was able to make the payment because the Guangdong provincial government told all hospitals that owed money to Kangmei to pay up by Tuesday, or else the hospitals’ heads would be held accountable, Caixin learned.

The provincial government leaned on the drugmaker’s customers at the request of the municipal government of Jieyang, where the company is based. Jieyang has a relatively weak economy in one of the most prosperous provinces in China. Kangmei is a major employer and taxpayer in the city.

China Chengxin Credit Rating Group, a local credit rating company, cut its ratings Tuesday on Kangmei and several of its bonds to AA+ from AAA and placed the company on negative watch, citing concentrated debt maturity and increasing liquidity pressure.

The pharmaceutical company has been stumbling since mid-2018 and has lost more than 70% of its market value. Kangmei’s shares jumped Wednesday and Thursday after it avoided the bond default. The stock closed at 8.37 yuan Thursday, up 14% from Tuesday’s close, but still well below its high of around 22 yuan last October.

Kangmei was involved in several bribery cases involving government officials. According to court documents released last June, the company bribed Cai Ming, former director of the drug safety supervision department at the Guangdong Province Food and Drug Administration, to the tune of 300,000 yuan from 2014 to 2015.

In exchange for bribes, Cai used his position to help Kangmei and 27 other pharmaceutical companies obtain drug approvals and drug safety certificates.

Kangmei’s founder and President Ma Xingtian maintains close relations with many local government officials. Even though several such officials have been sentenced to prison in corruption cases, Ma has remained unscratched.

As of Feb. 1, nearly 50% of the company’s shares have been pledged as collateral for debt, data from the China Securities Depository and Clearing Corp. shows. The controlling shareholder with a 33% stake, Kangmei Industrial Investment Holdings, has pledged almost all the shares it holds, the drugmaker said in a statement last November.

Kangmei faces the risk of passive stock offloading by its controlling shareholder because of the high ratio of pledged stock, which has made it more difficult to obtain further financing, China Chengxin said.

The company has been trying to raise cash through asset sales. Last month, it proposed to sell its 9.46% stake in GF Fund Management Co. Ltd. for 1.39 billion yuan.