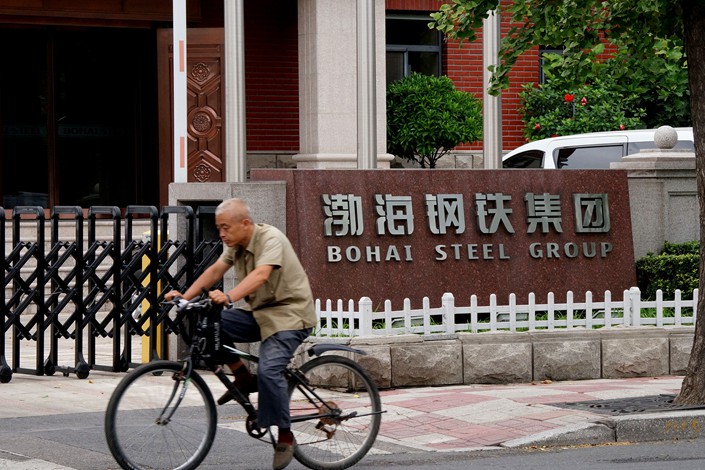 * Almost three years after a creditors committee was formed, a plan to reorganize the Bohai Steel Group — which is weighed down by $36 billion in debt — was approved by a court in Tianjin on Jan. 31

* The plan, perhaps the largest of its kind ever undertaken in the country, aims to help creditors recover a portion of the debt and revive the business. But many remain skeptical of its chances of success

(Beijing) — In 2015, Bohai Steel Group Co. Ltd. was a Fortune 500 company capable of producing 22 million tons of steel products a year. The following April, thanks to years of overexpansion, the company had fallen into a debt crisis and production had nearly ground to halt. That year, the central government ordered it to cut capacity by almost 70%.

In the near three years since, the Tianjin government-owned company’s creditors have been negotiating how to deal with its 243 billion yuan ($36 billion) in debt. The resulting reorganization, perhaps the largest ever in China, won court approval in the northern city of Tianjin on Jan. 31.

The reorganization plan is raising hopes that the sprawling company’s creditors will be able to recover a portion of their debts and create a leaner Bohai Steel with a revived business. However, investors and creditors remain wary about the plan’s chances of success.

The court decision came a day after representatives of Bohai Steel’s more than 100 creditors voted to approve the plan, ending a long series of twists and turns since a creditors committee was formed in March 2016 to restructure the debt-ridden company.

Under a separate court ruling in August, the reorganization would involve 48 companies under Bohai Steel’s umbrella, leaving 160 more other units to be liquidated. Bohai Steel’s bankruptcy administrators, led by Tianjin Vice Mayor Yao Laiying, have outlined a 10-year plan to reforge Bohai Steel through measures including equity sales and debt-to-equity swaps, with a goal of listing the company by 2023.

By the end of April 2018, companies under the Bohai umbrella held 115 billion yuan in assets and 243 billion yuan in liabilities, giving it a debt ratio of above 200%, Caixin has learned.

It has taken a lot of time and effort to come up with a plan to which Bohai Steel’s creditors could agree. In March 2016, the creditors committee proposed a draft plan for bankers to grant Bohai and its subsidiaries loan extensions and cut interest rates on existing debt by 10%, a person close to Tianjin’s state-owned enterprise supervisor has told Caixin.

Also in 2016, some bankers sought government approval to sell land that Bohai used as collateral to pay down debt, but that plan was later scrapped when it turned out Bohai lacked a clear title on some of the properties. The government has also asked banks to continue lending to Bohai and “pay the interest” on loans to the company, said a source at a Tianjin branch of a major state-run bank.

Some creditors said that this is probably the best option for Bohai Steel, though some have worried that Tangshan Delong, the main business unit of Delong Holdings, might find it difficult to afford the takeover given that its assets are only about 10% of Bohai Steel’s.

Delong Steel plans to take a hard look at Bohai Steel’s major facilities and revamp the latter’s supply and marketing channels within six months after it takes over.

As for Bohai Steel’s noncore business assets, creditors said that the bankruptcy administrators have decided to sell them to China Cinda Asset Management Co. Ltd., one of China’s big four asset management companies that specialize in disposing of troubled assets. Cinda will package the assets into a trust product and pay back creditors with returns on the product.

With the reorganization plan in place, some said they are still skeptical about Bohai Steel’s future. “Considering the massive gap between the company’s assets and debts, the (reorganization) plan will be difficult to implement,” said one of the company’s creditors.

Other creditors have expressed fears that without a management overhaul and better corporate governance, a revamped Bohai will only repeat the same mistakes that left it buried in debt in the first place.