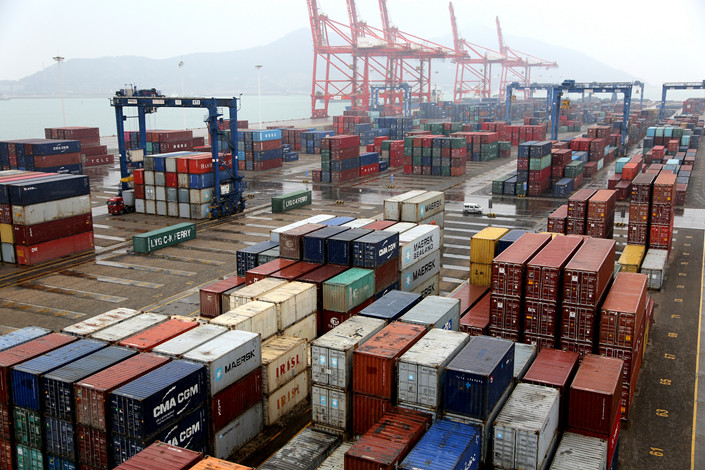 *Real impact of U.S. trade war will likely bite this year when China could book its first full-year current account deficit in a quarter-century

China’s current account surplus hit an all-time low in 2018, though not only because of the trade war with the U.S., analysts said.

Analysts said that the trade war had not impacted China’s economy enough to show much in the 2018 figures, at least not yet. Instead, the slump was mostly due to a growing deficit in goods trade with countries such as Japan and South Korea and a long-running deficit in the services trade.

The current account measures a country’s total trade in goods and services plus earnings on cross-border investments. It was widely speculated that China might book its first full-year current account deficit in 25 years after it ran a $28.8 billion deficit in the first half.

Following small surpluses in the second and third quarters, robust surplus growth in the fourth quarter backed by strong exports resulted in the narrow surplus, according to the State Administration of Foreign Exchange (SAFE) on Friday.

Also, the country’s 2018 surplus was equivalent to 0.39% of its gross domestic product (GDP), the first time the reading has dropped below 1%, according to SAFE. Central bank governor Yi Gang said late last year that China has never pursued a current account surplus, and the shrinking share of the surplus in GDP is an indicator that economic growth has come to rely more on demand from domestic consumers.

As the current account has gradually shrunk to less than 4% of GDP — a sign of a healthy economy — many analysts believe that China’s balance of payments is now moving more toward equilibrium.

China’s current account surplus expanded after 1993 and peaked at $420.6 billion in 2008. The surplus has continued to narrow since as the surplus of goods trade shrank and services trade expanded.

Zhang Ming, chief economist of Ping An Securities, said that the impact of the increased U.S. tariffs has not yet been reflected in goods exports. Multiple analysts, however, said that China is likely to see the impact of the trade war with the United States this year and book an annual deficit in 2019.

China’s deficit in services trade expanded to a record $292.2 million in 2018, 10% more than that in 2017, according to figures from SAFE, as Chinese spent more on overseas trips, transportation and intellectual property rights.

Wan Zhao, a senior analyst at China Merchants Bank, said that the country is likely to see a decline in capital outflow for service trade as SAFE strengthens the management of cross-border capital flows. Wan expects the service trade deficit to stop expanding in 2019.

The narrowing current account surplus has fueled concerns that it might erode an important source of stability for the yuan, as large surpluses have meant a steady flow of capital into China, giving the People’s Bank of China a war chest of foreign exchange reserves.

China’s cross-border capital flow has generally stayed stable, and the international balance of payments was also at equilibrium, the administration said.

China’s exports to the U.S. exceed its imports from the rival economy by $27.3 billion in January, continuing to narrow from the record high of $34.1 billion in November.