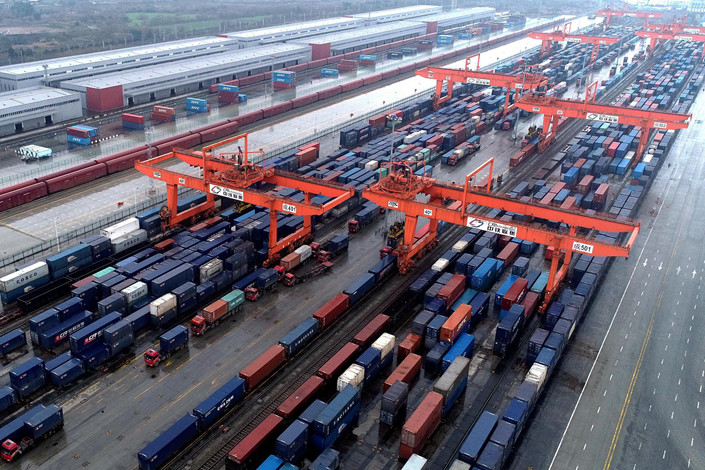 * China’s goods exports rose 9.1% year-on-year to $217.6 billion in January, while imports slipped 1.5% to $178.4 billion, with the overall trade surplus more than doubling from a year earlier

* The timing of the Lunar New Year holiday, which fell at the start of February, played an important role in boosting last month’s exports, an analyst said

China’s goods exports rose 9.1% year-on-year to $217.6 billion in January, according to data released by the General Administration of Customs. The growth beat a median forecast for a 3.3% decline in a Bloomberg News poll of economists.

The timing of the holiday played an important role in boosting last month’s exports, according to Julian Evans-Pritchard, an analyst with research firm Capital Economics. “Chinese New Year fell earlier in February this year, which means that more of the pre-holiday rush to fulfill orders will have fallen into January, boosting year-on-year export growth,” he said in a note.

After seasonally adjusting the data, Evans-Pritchard said exports and imports both picked up, but remained weaker than a few months ago. He expected both to fall, citing cooling domestic demand and easing commodity price growth.

Louis Kuijs, head of Asia economics at Oxford Economics, also expects export growth to lose a step. “We expect overall economic growth to remain under pressure in the coming months from slowing exports and weak sentiment before finding a floor around the second quarter in response to the growth-supporting measures,” he said in a note.

“This suggests that U.S. tariffs have started to become a more meaningful drag on exports,” Pritchard wrote.

“Destination-wise, exports to the U.S. continued to fall on a year ago, likely in no small part due to the impact of U.S. tariffs imposed in the third quarter last year,” Kuijs said in the note.

The U.S. President Donald Trump is considering extending the March 1 deadline that he had set for more than doubling tariffs on $200 billion of Chinese goods. Top officials from China and the U.S. are scheduled to meet in Beijing on Thursday and Friday to resolve the trade conflict.

“Despite frequent trade talks at senior levels, many uncertainties linger over the ongoing U.S.-China trade dispute and do not bode well for the export outlook,” said economists with Nomura in a note. Moreover, weakening external demand and the global tech down-cycle appear to be exerting additional downward pressure on China’s export growth.