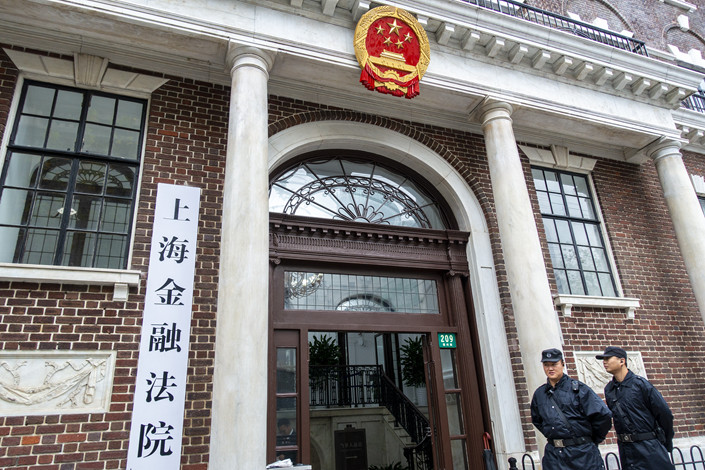 China’s first court devoted to financial cases is aiming to give the country greater influence over international judicial practices in the high-stakes industry, the court said Thursday.

As China further opens its financial industry to the rest of the world, the Shanghai Financial Court has taken on new tasks, including opining on high-profile international cases, according to the court’s five-year plan.

The court, which started taking cases six months ago, is the brainchild of President Xi Jinping. It was established as part of China’s judiciary reforms and a campaign to strengthen judicial oversight over misconduct in the financial industry.

In the 12-page plan, the court said it would strengthen judiciary judgments on high-profile cross-boarder financial cases to echo the national strategy of opening its financial system to foreigners, as well as those in involving international finance trading rules and foreign defendants.

It would also look to foreign courts for models on how to operate over the next five years, by bringing financial experts from home and abroad, and will file financial cases simultaneously with foreign courts in areas such as derivatives trading and internet finance to increase its reputation as a global financial court, the statement said.

Moreover, the Shanghai Financial Court will actively fulfill its duties to assist in financial disputes that have been ruled on in foreign courts, and promote its own rulings on cases that need to be accepted and carried out abroad, the court said. “The court’s internalization push aims to have China’s own practice in financial judiciary rulings, and give China more of a say in its own financial cases globally,” said Xiao Kai, the court’s vice president.

In dealing with domestic cases, the court also highlighted its jurisdiction over bankruptcy cases of financial institutions, vowing to facilitate the restructuring of viable ones and liquidate those that are insolvent, all while protecting the interests of creditors.

The financial court hasn’t yet accepted such cases since its establishment last August. Financial bankruptcy cases, however will emerge as China proceeds with its financial reforms, said Xiao. “To let certain financial institutions go bankrupt is a natural process.”