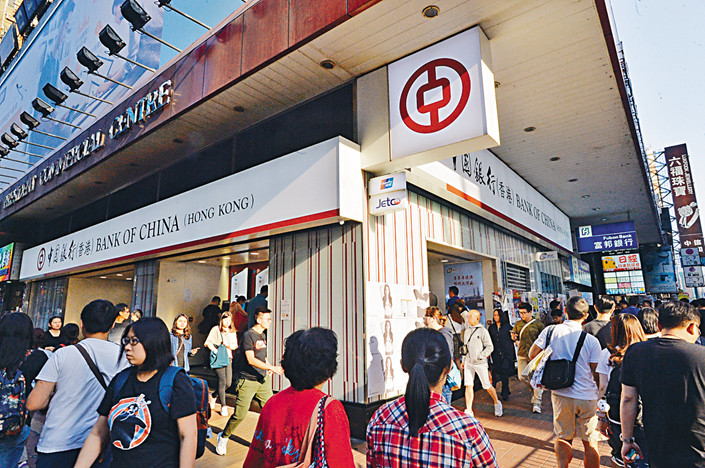 A Bank of China branch in Hong Kong on Dec. 17. Photo: IC

On Feb. 18, the Central Committee of the Communist Party of China and the State Council released the development plan for the Guangdong-Hong Kong-Macau Greater Bay Area, requiring commitments from all regions and departments to implement the plan. Based on the following analysis, we are excited about the development of the Greater Bay Area.

First, the financial institutions in the Greater Bay Area already have solid foundations on integration. From the perspective of “going into China,” research shows that more than 10 Hong Kong- and Macao-based banks have set up about 30 branches in 21 provincial cities in Guangdong province, accounting for 56% of the total number of overseas-funded bank outlets in Guangdong. From the perspective of “going out from China,” Chinese banks now account for one-third of the banking institutions in Hong Kong.

In the meantime, financial institutions will benefit from the Greater Bay Area development plan. The plan emphasizes key development objectives, such as “building an international financial hub,” “developing a characteristic financial industry,” and the “orderly promotion of the interconnection of financial markets.”

Among them, “orderly promotion of the interconnection of financial markets” is of great significance and will bring opportunities for market development. For example, there are several financial institutions that are applying for Hong Kong virtual banking licenses, which are anticipating that they will eventually establish a presence and provide services directly to customers in other parts of the Greater Bay Area outside Hong Kong.

The market is generally most keen to understand how the government and regulators will coordinate different systems. We believe that financial institutions should also actively explore other business issues touching on the effective development of the Greater Bay Area.

The Greater Bay Area demonstrates the characteristics of “One, Two, Three, Four” (i.e. One Country, Two Systems, Three Customs Zones and Four Core Cities), multiple regulatory agencies and systems acting together, and onshore/offshore fund separations. We believe that the challenges facing the development of industrial opportunities are not limited to these issues however. When the details are made clearer, the real competitive advantages will lie in an in-depth understanding of the nuances of the commercial environment across the region. We will further interpret that from the following two aspects.

Taking virtual bank applicants in Hong Kong as an example, while there are ambitions to eventually cover all customers across the entire Greater Bay Area, customers are inherently different across geographies and this must be considered in strategic planning.

First of all, the core needs of customers across the nine mainland cities involved will probably be gaining the access to offshore and integrated banking, insurance, and wealth and asset management services, which they cannot fully receive under today’s service model. On the other hand, the core needs of customers in Hong Kong, where the banking industry is well developed, are improvements to the user experience, as well as the reduction of hassle in selecting from the range of available financial products.

Secondly, cultural differences and language preferences may also imply that it is necessary for virtual banks to interact with customers in different ways to develop a digital-savvy and intimate client relationship. Taking payment methods as an example, while QR codes have become the default payment mechanism on the Chinese mainland, recent studies have indicated that people in Hong Kong still prefer other methods such as Apple Pay and Samsung Pay, on the back of the well-established credit card network.

If integration is key, the question to be resolved is how to run the region as “one business” and get different parts of the business to interact and collaborate with each other.

One key challenge to overcome is on the organizational level. Nowadays, financial institutions with footprints in Guangdong, Hong Kong and Macau operate each part separately. Taking a typical Chinese bank as an example, its branches in Guangdong are likely report to local subsidiaries for Guangdong which then report to the bank’s headquarters, whereas Hong Kong and Macau branches would be managed by separate teams under the bank’s international arm. This means that these businesses do not necessarily operate as a single unit, and it is a good idea for financial institutions to consider how to change this system, given the huge potential in the Greater Bay Area and the collaboration required for a successful strategy.

In addition, this will require future management teams to have greater capabilities and knowhow about both the local mainland market as well as in Hong Kong and Macau, which each have fairly different business practices, culture and landscape.

Jasper Yip is a principal at consultancy firm Oliver Wyman.