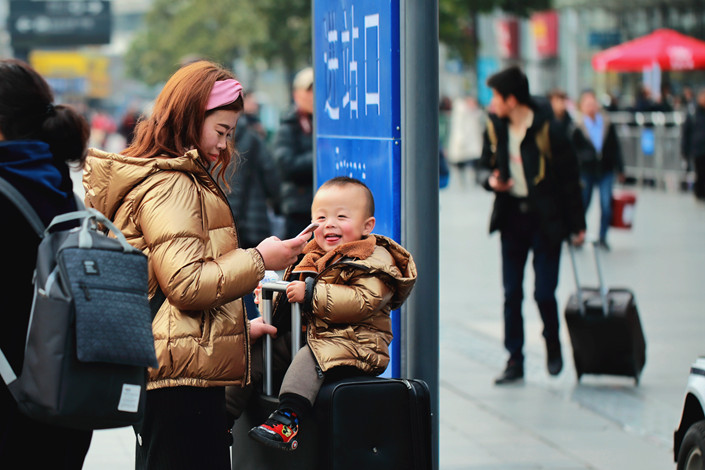 A mother prepares to travel with her child at Shanghai Hongqiao Railway Station. Photo: IC

Population decline will inevitably follow. According to the United Nations’ medium projection, East Asia’s total population will fall from 1.64 billion today to 1.2 billion in 2100. Nor is this simply an East Asian phenomenon. Iran’s fertility rate (1.62) is now well below replacement level, and Vietnam’s 1.95 slightly so. Across most of the Americas, from Canada (1.56) to Chile (1.76), rates are already well below two, or falling fast toward it.

The clear pattern is that successful economies have lower fertility rates: Chile’s rate is much lower than Argentina’s (2.27), and wealthier Indian states, such as Maharashtra and Karnataka, already have fertility rates around 1.8. In the poorer states of Uttar Pradesh and Bihar, fertility rates over three are still observed.

We should always be cautious about inferring universal rules of human behavior, but, as Darrel Bricker and John Ibbitson suggest in their recent book “Empty Planet: The Shock of Global Population Decline,” it seems we can identify one. Since U.S. and Western European fertility rates first fell below two in the 1970s, higher rates (for example, in the U.S., which averaged just over two between 1990-2010) occur only where first-generation immigrants from poorer countries bring those rates with them.

In all successful economies where women are well educated and free to choose, a below-replacement fertility rate is the average result of diverse individual behavior. Some women (typically around 15-20%) choose to have no children, many choose one or two, and some still more. All their choices should be respected; on average, they will probably tend to result in eventual gradual population decline.

Many people decry this demographic contraction, because it implies that fewer workers will have to support a growing cohort of elderly people. But while very rapid population decline, such as Japan may experience, would be difficult to manage, fertility rates moderately below replacement level (say, 1.8) would not only be manageable, but also beneficial for human welfare.

Pension systems can be made affordable by increasing average retirement ages, which will create incentives for societies to enable healthy aging, with people enjoying good physical and mental health well into what used to be considered old age. Slightly declining workforces, by making labor scarcer, will help offset the adverse impact of automation on real wages and inequality.

Meanwhile, at the global level, the lower the eventual global population, the less severe will be the competition over land use which results from rising demand for food, the need for some bioenergy in a zero-carbon economy, and the desirability of preserving biodiversity and natural beauty.

Eventual gradual population decline, provided it results from free choice, should be welcomed. By contrast, male chauvinist leaders see population growth as a national imperative, and high fertility as a female duty. And even many non-chauvinist commentators assume that there is something unnatural or unsustainable about population decline, that aging societies must inevitably be less dynamic, and that large-scale immigration is the essential response to demographic decline.

But the exhortations of chauvinist authoritarians will be ineffective as long as women are free to choose. And those who propose immigration as the necessary solution to an overstated problem must face a simple reality: if all people on Earth enjoyed prosperity and free choice, immigration from other planets would not be a feasible response to the global population decline that would likely result.

Such a global decline is, however, likely to be a century away. In fact, the greatest demographic challenge to human welfare is not low fertility and population aging, but rather the high fertility rates and rapid population growth still seen in Pakistan, much of the Middle East, and Africa, where the total population, according to the UN, could rise from 1.3 billion today to 4.5 billion by 2100, even if the average African fertility rate falls close to replacement levels by then (reaching 2.14 in the UN’s medium projection).

Bricker and Ibbitson claim that the fall in fertility might be more rapid than the UN medium projection suggests. But the recent decline has been slower than the UN anticipated ten years ago. As a result, world population forecasts for 2050 have increased, from 9.2 billion in the UN’s 2008 projection to 9.8 billion in the latest 2017 revision. In some North African countries, such as Egypt and Algeria, the decline in fertility rates has recently been reversed before replacement level was achieved.

The resulting population growth, in both North and Sub-Saharan Africa, will make it more difficult to achieve the per capita investment required to sustain rapid economic growth or to create jobs fast enough to absorb a rapidly growing working-age population. An underemployed youthful population will, in turn, be likely to threaten political instability for many decades.

A more rapid fertility decline would deliver huge benefits to these countries, as well as making global sustainability easier to achieve. Fortunately, such a decline does not require China’s one-child policy. Educating girls, providing access to contraception, and freeing them from the chauvinist demands of conservative religious or political leaders would suffice. It should be a high priority.

Adair Turner, Chairman of the Institute for New Economic Thinking and former Chairman of the UK Financial Services Authority, is Chair of the Energy Transitions Commission.