By Li Liuqian and Timmy Shen 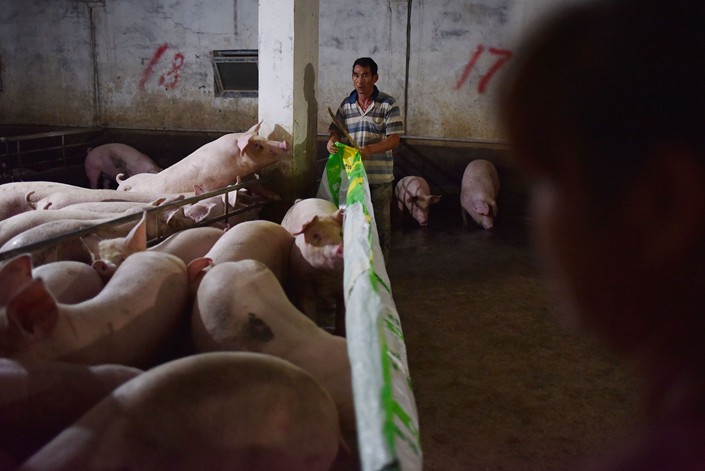 China’s pork-related stocks are doing well so far in the Year of the Pig, with a “pig index” rising more than 20% since trading resumed after the Lunar New Year holiday.

As of Friday, an index that tracks the stocks of 23 listed companies connected to the pig-farming industry has risen about 22% since trading resumed on Feb. 11, according to East Money, the financial information provider which compiles the index.

Besides pork-linked stocks, stocks related to the agriculture, forestry, animal husbandry and fishing industries spiked this week following the central government’s Tuesday release of the annual No.1 Document, which pledged to boost rural development.

The document outlines land reforms that are aimed at freeing up more space for development in the countryside and ensuring that farmers are treated fairly. The document also “stressed eradicating poverty, which can benefit the stocks related to pig farming,” said analysts of Guosheng Securities, adding that the African swine fever outbreak has forced some small farmers out of the industry, bringing benefits to larger pig farming companies.

African swine fever has also contributed to the pig farming stock rally due to expectations of lowered pork supply, said analysts. Authorities have culled nearly 1 million pigs across the country since August, according to a Tuesday statement from China’s Ministry of Agriculture and Rural Affairs. The statement didn’t specify how many pigs have died from the disease.

As a result, pig production capacity has dropped at least 10%, analysts of from TF Securities estimated in a research report released Sunday. In January, the number of living pigs in China was down 12.6% year-on-year, with the number of live sows specifically down 14.75% year-on-year, according to data from the agriculture ministry.

Haitong Securities analysts said in a research note that some farmers sold many of their swine before the Lunar New Year and that the country is likely to experience a pork shortage in March and April, the analysts said.

As of Feb. 18, the average pork price was 12.5 yuan ($1.9) per kilogram, up 10% since the Lunar New Year holiday that fell in early February, said Haitong Securities analysts citing data from industry tracker pge8.com.

Multiple analysts said that the climbing pork price might represent a turning point in the “hog cycle” — a phenomenon of cyclical fluctuations of supply and prices in pork market. China saw four hog cycles from 2000 to 2014, and the fifth hog cycle started in 2015 with the pork price peaking in 2016. The price later dropped and remained low in 2017 and 2018.

The price is likely to increase throughout 2019, multiple analysts said. Guotai Junan Securities analysts said that the industry will soon experience losses and farmers will likely weed out more breeding sows, which will eventually lead to a turning point in the hog cycle.