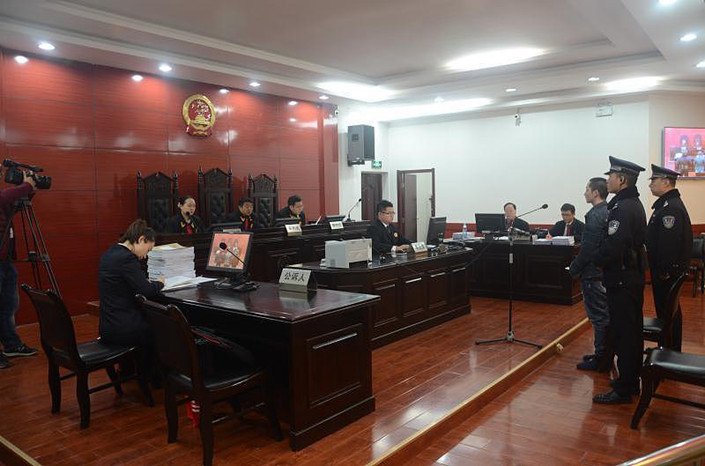 China’s Ministry of Public Security arrested 16,249 suspects and seized 3.53 billion yuan ($527 million) in assets in a crackdown on loan scams in 2018, officials announced at a press conference on Tuesday.

Officials said they have broken up 1,664 groups running loan scams across the country and solved 21,624 cases of fraud, extortion and false litigation since the launch of a larger battle against “black and evil forces,” or crime syndicates and gangs involved in criminal activity.

In January 2018, China announced a campaign to “sweep away black and eliminate evil,” committing to a broader effort to squelch criminal organizations and end “bullying” business tactics — an effort that will deepen in 2019, public security officials told the press.

The loan scams discussed at the press conference are known in China as “set-pattern loans,” where a victim is lured into borrowing money over the phone or online. What follows is a series of traps that force the victim to borrow more and more, building up their debt. The lender then uses false evidence and intimidation tactics — including violence — to force the victim to pay, even taking the victim’s property.

“They sign loan contracts with borrowers with an annual interest rate of 24%,” explained Zeng Haiyan, Political Commissioner of the Criminal Investigation Bureau at the Ministry of Public Security, at the press conference. “In actual repayments, they usually charge interest of more than 2000%, far beyond the standard prescribed by law.”

Such scams have cost people millions of yuan, their homes, and in some cases, their lives. Last August, a 26-year-old woman surnamed Fan in Taoyuan, Shanxi province killed herself after her original loan of 1,200 yuan — which was actually only 840 yuan once fees were deducted — had to be repaid in seven days.

Due to the high interest charged, she could not repay the loan. The lenders incessantly called her, demanding money, and even sent faked naked photos of her to her family with captions claiming she was engaged in sex work to repay her debt. The police apprehended 12 members of the group that set up the loan, finding that they had earned 500,000 yuan by scamming 2,000 people.

The groups behind these sorts of loan scams often masquerade as micro-loan companies or online lending platforms, said Tong Bishan, a deputy inspector of the Criminal Investigation Bureau of the Ministry of Public Security. Once someone begins to borrow money, the groups carefully plan how to get the victims to build up their debt. “Afterwards, they ‘legalize’ the illegal debt by using false evidence prepared in advance,” Tong said, leading the victims to believe that they have violated the law and preventing them from reporting anything to the authorities.

Zeng said that there were three main types of “set-pattern” loans. The first is where the lenders lure customers with real estate, set up traps at each step of the process, and create traces of bank flows. At the end, they seize the victim’s real estate through violent means or legal proceedings. The second involves automobiles, where lenders employ a variety of techniques to pressure loan-holders, including sabotage. The third is cash loans, which target younger people using internet lending platforms or apps to get easy loans that in reality have extremely high interest.

At the press conference, officials also spoke of high-profile cases of “set-pattern” loans, including a group that targeted university students in multiple provinces. In that case, 129 people were arrested, and more than 560 million yuan of assets were seized.