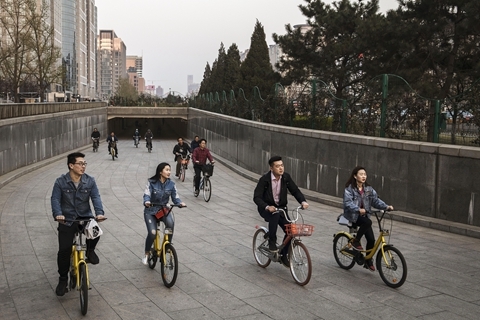 Investment in China’s sharing economy industries contracted for the first time last year, ending several years of breakneck growth that led to an explosion in services providing shared rides, communal office spaces and access to a broad range of goods and services.

At the same time, the actual volume of business transactions by sharing economy companies continued to post strong growth in 2018 as consumers and businesses grew increasingly comfortable with such services, many of them web-based.

China has embraced the sharing economy concept over the past five years, rolling out Uber-like shared rides, Airbnb-style homestays and more-novel concepts like shared basketballs, umbrellas and even sex dolls. But many companies grew quickly by selling services at a loss using investor dollars, leading to widespread closures by some and intense pressure on others as investors start demanding clear paths to profits.

Investor impatience led to a 23.2% decline in new funding for shared services last year, with total investment at 149 billion yuan ($22.3 billion), according to a report from a research arm of the National Development and Reform Commission, China’s state planner.

The biggest drop came in the transport services sector, which produced such giants as the Apple-backed Didi Chuxing and shared-bicycle operators Mobike and Ofo. Investment in shared-transport services totaled 41.9 billion yuan last year, down 61% from a banner year in 2017 when Didi, Mobike and Ofo each did funding rounds worth hundreds of millions or even billions of dollars.

While overall fundraising declined, growing acceptance of such services helped the sector’s total transaction volume rise 41.6% to 2.94 trillion yuan. Lifestyle services were the biggest slice of that pie with 1.6 billion yuan in transactions, followed by manufacturing and transport-related services. The report projected that overall revenue generated by the broader sector will expand by 30% or more each of the next three years.

New funds are increasingly going to sector leaders as different industries start to mature, making it harder for new companies to enter the market, the researchers found.