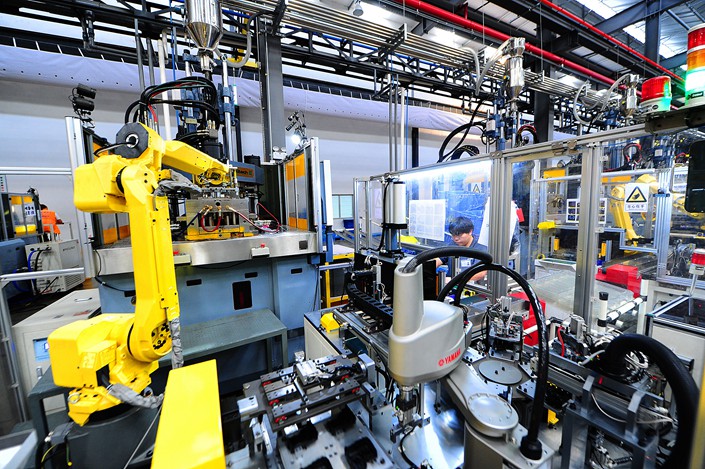 China wants to make better use of artificial intelligence (AI) to boost the country’s labor-intensive manufacturing industry up the value chain, according to an annual government work report released Tuesday.

The government wants to utilize AI to advance the “quality development of the manufacturing industry, enhance industrial fundamentals and technological innovations to accelerate China into a manufacturing powerhouse,” according to the report delivered by Premier Li Keqiang at the start of the meeting of the National People’s Congress in Beijing.

The rise of artificial intelligence and cloud computing has helped companies reduce costs and improve efficiency. Industries that have benefited include surveillance and logistics. Take logistics, a critical sector given the rise of China’s e-commerce market. By deploying automation and robotics, companies can reduce labor cost in processes including inspection and delivery.

In the previous work reports since 2017, Beijing has set its sights on tapping AI and the internet to upgrade consumer sectors such as health care, elderly care, education, culture and sports. This year, manufacturing is in the spotlight.

China aspires to become a world leader in AI and its applications by 2030. In the latest effort to leapfrog it global competitors, China is set to launch around 400 majors related to AI, big data and robotics this year across universities nationwide, the state-owned Global Times reported in February, citing the Ministry of Education.

The country’s tech giants, Alibaba Group Holding Ltd., Baidu Inc., JD.com Inc. and Tencent Holdings Ltd. have all jumped onto the AI bandwagon in recent years, eager to carve out a niche in areas such as autonomous cars, drones and logistics.

On Sunday, Baidu chief Robin Li offered up three proposals for future AI legislation related: one for expanding research into ethics, one for improving the regulation of electronic medical records, and one for using AI to solve traffic-related problems.

Both the government report and Li’s proposals took place at the “Two Sessions,” shorthand for the National People’s Congress, the annual meeting of China’s top legislature, and the Chinese People’s Political Consultative Conference, the country’s most prominent advisory body.