China Has No Artificial-Intelligence Bubble, Ex-Head of Google China Says

By Bi Xiaonan and Younghyun Jeon 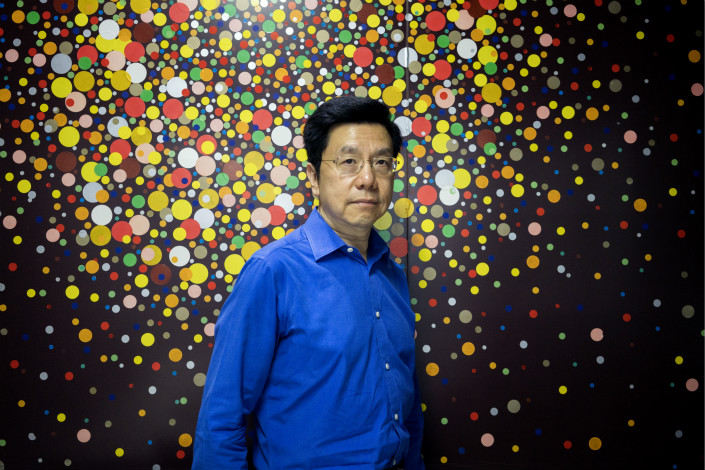 Kai-Fu Lee, founder of Sinovation Ventures, poses for a photograph in Beijing on Aug. 15. Sinovation Ventures' latest endeavor, an in-house artificial intelligence institute, has about 30 full-time employees, which it plans to increase to about 100 within the year. Photo: Visual China

Lee Kai-Fu has always been very bullish about the future of artificial intelligence (AI) in China.

He started off his keynote speech at an AI conference at the Massachusetts Institute of Technology in November by predicting that self-driving cars will become a mass phenomenon in the U.S. in 15 to 20 years. But in China, he said, it will take “more like 10 years.”

“Although there are concerns about whether there is an emerging AI bubble in China, I’d say there isn’t one,” he told Caixin.

Lee is a real insider when it comes to assessing the state of AI development in both North America and China. He completed his doctorate in computer-aided speech recognition at Carnegie-Mellon University (CMU) in 1988 and went on to work at Apple Inc., Silicon Graphics Inc. and Microsoft Corp., and head Google Inc.’s China business. In 2009, he established Beijing-based Sinovation Ventures, an early-stage venture capital firm that has funded many promising Chinese AI startups.

These include Face++, the country’s largest face-recognition software provider in terms of valuation, which beat teams from Microsoft, Facebook, Google, and CMU at global technology competitions last year.

While China is quick at applying AI technology into real-world situations, Lee said it still needs to improve on fundamental research. “Despite the scale of China’s accomplishments in AI, we still lack deeper insight when it comes to basic research,” Lee said. But “the large amount of data available in China (for training AI systems) and government policy backup gives us different strengths compared to our competitors.”

China’s State Council expects the domestic artificial intelligence industry to grow to 400 billion yuan ($62.2 billion) by 2025 and exceed 1 trillion yuan by 2030, according to its first AI development plan, released in June.

Caixin spoke to Lee about what to watch for as China vies for AI dominance, whether we should worry about AI stealing jobs, and how to reform China’s education system to address the challenges posed by intelligent systems. Following are edited excerpts of a Chinese-language interview.

Caixin: There’s a big question about whether China’s AI is too focused on chasing competitors. What do we lack and what are we good at?

Lee：Despite the scale of China’s accomplishments in AI, we still lack deeper insight when it comes to basic research. It is true that China has a lot of potential to become an AI power. The large amount of data available in China (for training AI systems) and government policy backup gives us different strengths compared to our competitors. But we still need a few breakthroughs.

Strengthening scientific research is one priority. I see that there’s a gap between China and other leading AI countries in terms of scientific research. U.S., Canada and the U.K. have a strong research background. But considering the fact that we have many young people entering this field, and it’s growing quickly, I believe we have a bright future.

Although there are some concerns that a bubble is emerging in this industry, AI development is still in its early stages. There is more potential to make profits with existing technologies, so I think we still have space for growth.

Most of the entrepreneurs of Chinese AI companies are scholars or scientists. How can these tech-savvy leaders become charismatic leaders?

People from a science background are used to have particular way of thinking of finding. Even when writing thesis papers, the purpose is to find or study something that has never been found before. They are always in search of something new or better. But other things (needed for business success) are easily overlooked.

Understanding the needs of the market and satisfying these needs is crucial, whether you are running a company, making an investment or even creating content. Ideal leaders should be able to combine the spirit of the scientific way of thinking and, at the same time, create business value by commercializing existing technologies. For leaders who were scientists, it’s really important to focus on finding new things while satisfying customers’ needs. Since those two are often conflicting, it’s important to balance both sides.

There is an ongoing debate on whether AI will take away jobs and lead to severe unemployment. Should we worry?

I personally think this is too exaggerated. One of the stereotypes about AI is that it is an omnipresent technology. In fact, it’s not. AI can only substitute the part of work that requires analyzing big data.

I would say about 50% of tasks done by humans will be substituted. It’s only a matter of time, and it will raise challenges. However, it doesn’t mean 50% of people will lose their jobs. For example, if about one-third of your job is replaced by technology, then it will free you up to do other valuable things. AI can be used as a tool to raise efficiency instead of being a job-stealer. Meanwhile, you can also retrain to do different tasks.

We must first check what kinds of occupations are likely to be eliminated, and restructure how we can map out vocational training. Educating our next generation is important as a way to prevent unemployment. Our next generation should be guided toward careers that can’t be substituted by technology.

How can China reform its education system to meet these future challenges?

Seek out what AI can’t do. AI can just optimize a process. It can’t work on complex tasks since it doesn’t have personal feelings or the ability to innovate. We should guide children to have a specialized career path.

Let children do what they can do best and help them develop their potential for innovation. Rather than having a one-size-fits-all education system, China should focus on creating a system that brings out the hidden potential and traits in children, and eventually help them do the things only they can do. Some Western education models with more freedom for children to choose what they want to study can be one example. Providing personal education based on an individual’s own preference will be an ideal model.

But educational reform takes time, and personalized education needs money and many households might not be able to afford it. How can these issues be tackled?

Giving an equal opportunity to every single child is important. AI can be an efficient stepping stone for such education. Generalization of high-level education is possible to realize with the internet. For example, we can deliver lectures from China’s most popular math teacher in the form of video content that is easily accessible to hundreds of students in rural areas where there is a lack of education materials. Also, by using voice recognition technology, children can learn foreign languages and correct their pronunciation without paying high tuition fees.