Winning Verdict for the AI Lawyer 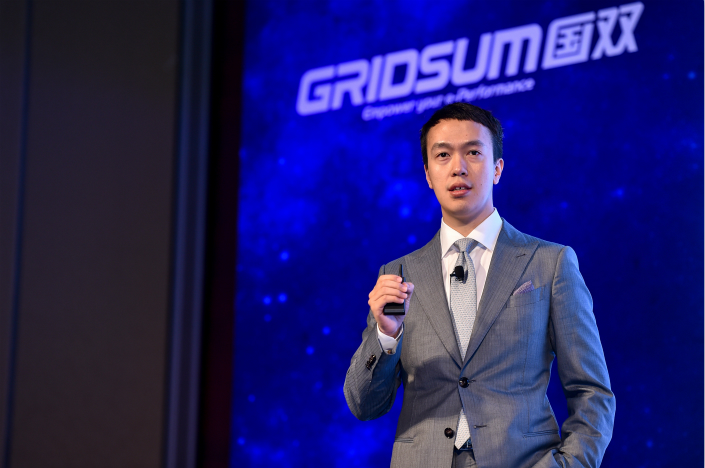 Founder and CEO of Beijing-based, NASDAQ-listed Gridsum, Qi Guosheng, described his firm's AI service to help with judicial decision-making as a junior lawyer that remembers everything and never makes mistakes. However he says that unlike a senior lawyer, it cannot yet be creative. Photo: Gridsum

Yes they can, says the founder of a Beijing-based start-up called Gridsum whose company supports court procedures by providing offsite mediation services and easy access to court records.

Qi Guosheng's service passed a major test in November when it was used by judges in a Beijing civil court to settle intellectual property disputes.

Gridsum coordinated with Tencent Holdings Ltd. to develop a videoconferencing service that piggybacks on the latter's popular messaging app WeChat. Judges, plaintiffs and defendants can participate in a live mediation session without meeting in a courtroom.

According to Qi, the AI-based service improves judicial decision-making.

"If your case is handled by a relatively young judge who doesn’t have much experience, at times the penalty or settlement might be a bit off" compared to nationwide averages, Qi said. But Gridsum makes it possible for any judge "to refer to all relevant verdicts by experienced judges. This can make the difference between a 3,000 yuan ($453) fine and a 30,000 yuan fine.”

“Decisions based on big data are more transparent and objective," he added. "Such decisions are less about your own gut feelings.”

Now that Gridsum is off the ground, Qi sees a bright future for his unique service. He also thinks startups like his will have a major role to play in the Chinese government's effort to create a $150-billion AI sector by 2030.

Startups in the AI field are sure to face challenges, Qi said. And among investors, there is a danger of a tech-sector bubble bursting.

But Qi is optimistic overall about AI and his company's future. He expressed these and other thoughts in a recent interview with Caixin. Excerpts from the interview follow:

Caixin: What was your first tech venture? How did that shape your journey as an entrepreneur?

Qi Guosheng: When I was in high school, I helped build and maintain my school's official website, and ran a small forum for students. That was between 1999 and 2002.

At that time, a lot of people played PC games. Some games were hard to play, and magazines about these games were very popular. But my classmates’ parents didn’t let them buy such magazines. So I created a website that was hidden beneath our school’s website. There were no links to it. The only way to access it was by typing a very long URL.

I like to think that this was one of the very first blogs in the world. People who visited the website could also leave comments that were 70 Chinese characters long. My parents were pretty good to me at that time, so I could buy any magazine on the market. I would scan most of the content and put it on the website.

It was up and running for two years, until the day our server crashed. When I checked the log to figure out what had happened, I saw there had been more than 6,000 visitors to the site from all over China within just one minute. I was scared and shocked. They were all visiting my hidden website. I had to figure out why we had attracted so much traffic, especially since we had no outside links to the site.

Then I found a very interesting name: Google. Google.com had sent all this traffic to my website. I had heard about Google as a search engine, but I didn’t really use it back then. When I looked up a bunch of popular game sites, my website was listed third in Google’s search rankings. I was so scared because all of this linked to my high school website, and most of my content would have copyright issues, as it was not written by me. So I shut down the website. To this day, I don’t know why or how Google found my hidden site.

This experience kindled in me an interest in search engines’ algorithms and technology and data analytics, especially web analytics.

Have there been there other defining moments in your life?

Qi: There have been several. When I was in college, I often thought about starting my own business. But I questioned myself and thought, "You haven’t worked for anyone yet, so how can you know how to do it?" Then I got a three-month internship at the Microsoft research office for Asia in 2005, during my third year of college. I was assigned to a natural language computing group.

I worked on a project to train a computer to learn content from a massive number of scientific papers in order to answer complicated questions. That was extremely sophisticated technology 10 years ago. The only challenge was that it was not practical, especially due to the time needed to train the computer, and it had limited performance.

I learned several things from the internship. First, I felt that with AI, one day when you can find enough data from all over the world and there are no performance restrictions, then you can do a lot. Then the technology doesn’t have to be limited to a lab. To finish the project at Microsoft, we used only 50,000 papers, which was a very limited number. This didn’t cover the entire scientific world.

Second, I realized I might be a terrible employee. But back then, I was a young and ambitious kid. I was straightforward. My methods of communicating with superiors weren't smooth. I finished my tasks quickly, and I had a lot of free time. I was nervous about this free time, when I was just sitting in the office. I would ask why I had nothing else to do and why I could not go anywhere. This pushed me to create my own business.

Did your upbringing influence your decision? Or did you follow the examples of any role models?

Qi: When I was a kid, I read a lot of books about entrepreneurs like Bill Gates and Michael Dell. Most of my role models were also world conquerors, war heroes like Napoleon. I read a lot of World War II history. I thought that although these people had a huge impact on the world, and created a lot of conflict, they also prompted forward leaps. They pushed medicine, science, technology, communication, etc., to move things to the next stage. So maybe they aren’t role models, but I admire them as heroes of development.

Gridsum has created several AI-based solutions to help create a “smart court system” in China. Was this inspired by your need to have a larger social impact?

Qi: Our solutions for the court system are based on analyzing all the previous cases. Several years ago China decided to open all verdicts from non-sensitive cases to the public. We’ve been training our system with these case documents and our system, as I describe it, has become a junior lawyer that never makes mistakes and remembers everything.

Why isn’t a senior lawyer? Because the AI cannot be creative yet.

We’ve developed a couple of solutions based on this foundation. We’ve started with the intellectual property (IP) court, because it’s difficult for lawyers and judges to keep up in areas such as IP or cyberspace, where the industry develops very quickly.

China was a civil law system, but in civil law each rule must be written in a very detailed manner. That means it takes time to make new rules and at times existing civil law can’t be applied to deal with conflicts in these areas. So, common law (that rules based on legal precedence) would be a better solution. Common law regulates things at a higher level, has less detail needed in a written law. Our system can help in this area, because it helps a judge or lawyer to identify parts of a case that are similar to previous cases.

Also, if your case is handled by a relatively young judge who doesn’t have much experience, at times the penalties or settlements might be a bit off (too high or too low, compared to a national mean). Our system allows them refer to all relevant verdicts from experienced judges. This can make the difference between a 3,000 yuan fine and a 30,000 yuan fine. Decisions based on big data are more transparent and objective. Decisions become less about your own gut feeling.

We started piloting another service on WeChat in early November, which allows judge to conduct remote mediation sessions during short-breaks squeezed in between back-to-back court hearings. The service built with Tencent is a mini-program that can be used on WeChat to mediate disputes before going to court. A full court hearing takes a lot of time. This will help to reduce the case load on judges and give easier access to justice to the average person.

What are the challenges for a tech company when working with the government? Do you feel there is a culture clash?

Qi: Interestingly, when I started Gridsum in 2005, our first clients were government agencies. We worked for the police, immigration control and border control departments.

We decided to branch out, because the work essentially “outsourcing.” We wanted to build our own products. Another reason was that we couldn’t control the project, it was slow, and there would be delays if any officials were transferred.

But we also realize that if you want to grow your business in B2B services, like big data analytics and AI, instead of B2C consumer internet services in China, you have to deal with government and state-owned enterprises, because state-owned enterprises still dominate major industries, including energy, mining and manufacturing, and China has a government policy-driven economy.

Is China headed for an AI bubble?

Qi: I think AI is definitely a bubble created by financial guys. It isn’t created by engineers. AI has become popular today due to better computing infrastructure, allowing for better performance. A lot of things that were limited to research labs can now be used (in the real world). AI, simply, is about different levels of automation, from business process and work flow automation, to thinking and decision automation. It’s not something magical. It could liberate people from repetitive, labor-intensive, boring work. However, it won't be able to completely replace human beings, as it does not create new knowledge, especially in those sectors that involve creative, emotional, and innovative work.