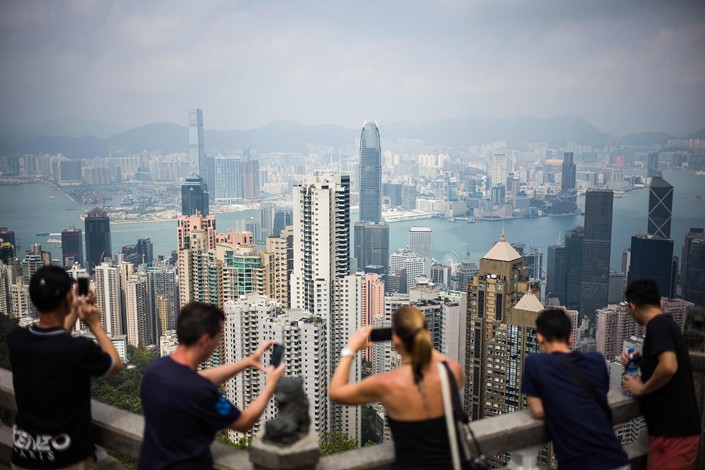 Developers from the Chinese mainland have found themselves with less liquidity amid tighter financing regulations and subdued sales at home. They purchased less land in Hong Kong last year than in 2017.

Mainland developers stormed into Hong Kong in 2016 and 2017, solely or jointly acquiring nearly 40% of the parcels of residential land that were put out for public tender and contributing some 65% of the entire sum of capital used to buy land there over that two-year period.

The numbers dropped significantly last year, when they only acquired three of 11 pieces of residential land on the auction block — compared with seven of 10 in 2017. The Hong Kong government unlocks a certain amount of land for development each year and adopts a highest-bidder-wins-all approach.

“It seems that they (Chinese mainland developers) can’t even survive for one year now that they hardly come to Hong Kong to buy land,” said Ronnie Chichung Chan, chairman of Hong Kong developer Hang Lung Properties Ltd. It would be difficult for mainland real estate companies to take root in Hong Kong given that they had not experienced the previous property bear markets in the financial hub, Chan predicted in a 2017 letter to the company’s shareholders.

A bearish market with less capital at hand

Mainland developers haven’t been in the Hong Kong property market for long. In 2011, when Hong Kong-listed China Overseas Land and Investment Ltd. — the real estate arm of state-owned China Overseas Holdings Ltd. — poured about HK$580 million ($74 million) into a piece of land there, it was one of the first mainland companies to acquire a residential parcel in Hong Kong.

Other mainland developers also joined the game. Poly Property Group, Vanke Property Company Ltd. and Shimao Property Holdings Ltd. have made forays into the Hong Kong market and actively participated in land auctions in 2016 and 2017.

But the excitement cooled in 2018 as the property market became fairly subdued. “Mainland property developers have become more cautious. They are not sure if it is still worth it investing in land,” said Antonio Wu, a senior executive at property consultancy Colliers International.

The turnover cycle for residential properties in Hong Kong usually rounds up to two or three years. That said, mainland developers had expected greater returns from selling in 2018. Unfortunately for them, the market has been trending downward since the middle of last year. At the end of December, the price indexes for private residential properties compiled by the Hong Kong government had fallen about 9% in five months. That month, Hong Kong saw a total of 2,060 residential unit deals — a drop of 61.4% from the previous year, according to data from Hong Kong’s land registry office.

Mainland developers’ reduced liquidity has also restricted their market activity. Once able to take out huge loans from banks or large consortiums to finance investments in Hong Kong, they’re now unable to do so after the Chinese government tightened rules in August 2017 for offshore property investment, and later reigned in foreign exchange.

In contrast, Chinese companies could more easily raise money after a 2015 decision relaxed restrictions on corporate bond issuance. In 2015 and 2016, mainland real estate firms raised 583 billion yuan ($87 billion) and 1 trillion yuan, respectively, through such bonds, according to a research report by Sealand Securities. Bond issuances increased 288% year on year in 2015, and 75% in 2016, providing the mainland developers sufficient capital to expand in Hong Kong, the report said.

In addition, mainland developers use a very different pricing mechanism from their Hong Kong counterparts, said Patrick Chau, a deputy senior director at real estate services provider Savills. Hong Kong developers typically bid on land with careful calculations based on current property prices and construction costs with a profit ratio set at about 15% to 20%, while mainland developers seem more aggressive when bidding as they tend to think that house prices will keep rising and that future property prices should be adjusted according to the current cost for land at auction, Chau told Caixin.

Analysts also pointed out that the longer turnover cycle in Hong Kong could be a challenge for mainland developers that had long pursued the “fast turnover” model. On the mainland, it takes six to 10 months on average for a large developer to go from acquiring land to selling property, data from real estate data provider CRIC show. In Hong Kong it generally takes three years, said Huang Zhiliang, an analyst at Bloomberg Intelligence, who added that such a turnover cycle poses more risk and puts pressure on mainland developers.

Mainland developers may have become more low-key, but they still have plenty of interest in the market. In 2018, mainland firms participated in 73% of all residential land bids, according to data from Jones Lang Lasalle Inc., though far fewer mainland developers actually acquired land. Mainland buyers seem to place more interest in smaller and less costly parcels, many of which cost less than HK$1 billion, multiple industry sources told Caixin.

China Vanke Co. Ltd., one of China’s largest property developers, has also told Caixin it is looking to increase channels to acquire land, and would also consider urban renewal projects.

In the future, mainland real estate companies will likely continue to develop their Hong Kong businesses, but will likely do so through joint investments or joint development with Hong Kong companies, said Bloomberg’s Huang.