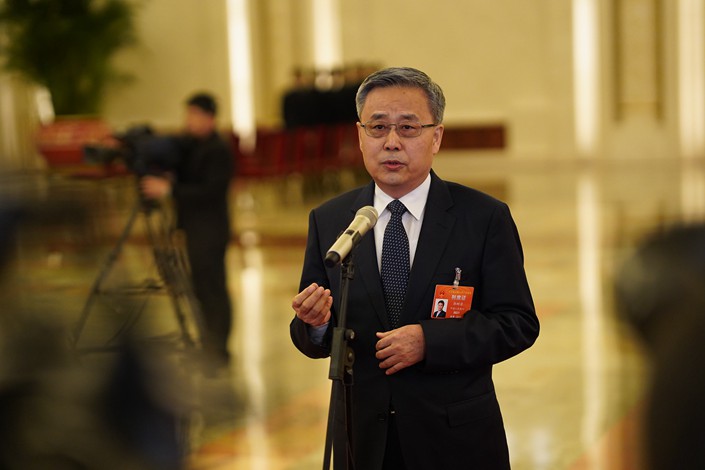 Supporting private and small enterprises will be at the core of financial supply-side structural reform, the country’s top banking regulator said Tuesday, as the government shifts its focus for the financial sector away from deleveraging to supporting growth.

“Appropriately solving the problem of how to provide lending, credit and financial support to small enterprises and private companies is the most important part of financial supply-side structural reform,” Guo Shuqing, chairman of the China Banking and Insurance Regulatory Commission, told reporters on the sidelines of the ongoing National People’s Congress.

Changes must be made in the systems of financial institutions, markets and products to lower the financing costs of small companies and reduce the difficulties they face accessing credit, he added.

However, he also cautioned that it remains a challenge for banks to gather sufficient information to make sure that the borrowers use the funds for normal business operation instead of speculation.

President Xi Jinping first introduced supply-side structural reform in late 2015. It has dominated key economic policy documents since 2017 and has focused on cutting industrial overcapacity, reducing the stock of unsold homes, lowering borrowing costs and taxes for companies, deleveraging the corporate sector and improving “weak links” in the economy.

But the term “financial supply-side structural reform” was only put forward officially at a Feb. 22 meeting of the Politburo, a committee of the 25 most senior Communist Party members. The reform includes offering more diversified and differentiated financial products and services, smoothening channels by which credit and monetary policy changes feed through to the real economy, and improving the efficiency in the allocation of financial resources, officials have said.

The Chinese government started a campaign to deleverage the financial sector and crack down on shadow banking activities in 2016 in part to curb debt risks and prevent a systemic crisis. However, it has slowed the pace of the deleveraging since last summer and prioritized stabilizing and bolstering economic growth after the campaign caused investment to cool and credit defaults to spike due to the tightened liquidity. Private companies were among the worst hit. The country’s trade war with the U.S. also added uncertainties to the economy’s prospects.

The government has undertaken a slew of measures to support the private sector, including tax breaks and incentives for banks and bond investors to lend to the companies.