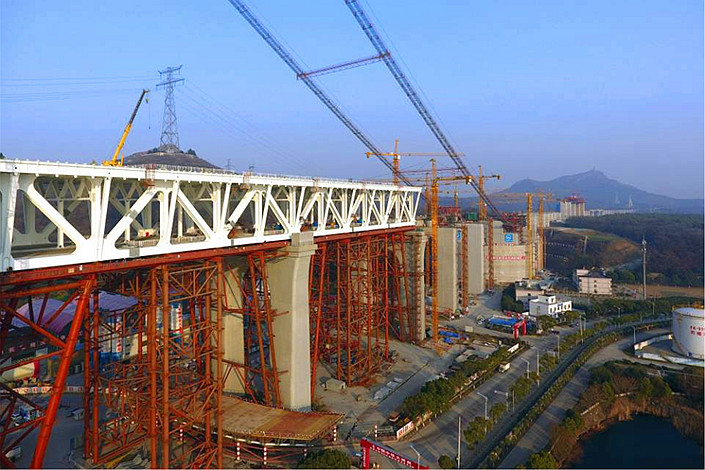 Proposals to help resolve the financial problems of Zhenjiang, a city in Jiangsu province that’s one of the most indebted in China, have aroused the ire of the Ministry of Finance as they risk running foul of regulatory efforts to clean up the mountain of on- and off-the-books borrowing by local governments.

The furor was triggered by a March 4 website statement from the Jiangsu’s provincial graft-buster that implied the Ministry of Finance had approved a debt disposal plan to defuse the growing risks stemming from the Zhenjiang local government’s massive debts.

The four-paragraph statement, titled Zhenjiang City: Three Areas of Focus to Strengthen Capital Management, referred to an implementation program for the debt-resolution plan once it had been approved by the ministry and how it would be supervised. The program was mentioned as part of an overall summary of the achievements of commission officials embedded in Zhenjiang’s finance bureau, such as the resolution of the city’s debt problems and the implementation of cuts in taxes and fees.

Although it did not give financial details, a brokerage source familiar with the matter told Caixin that the plan involved China Development Bank, one of the country’s three policy banks, providing special long-term loans of as much as 20 billion yuan ($3 billion) at low interest rates to an asset management company (AMC) wholly owned by the Zhenjiang government. The AMC would then lend the money on to the city’s local government financing vehicles (LGFVs), special purpose companies set up to raise money to finance infrastructure projects.

However, a source close to the ministry disputed that the program referred to in the statement, which has since been taken down from the commission’s website, was the same as the ministry’s. “The plan approved by the Ministry of Finance and the plan the Zhenjiang government is carrying out are not the same,” the source told Caixin.

“Zhenjiang accepted this plan, but it has not been implementing it,” the source said. “Instead of carrying out a painful and time-consuming program, the Zhenjiang government has chosen the quick and easy option of linking up with China Development Bank. But that is equivalent to transferring local debt to the bank and also means that fiscal risks are being transmitted to the financial sector.”

A source from China Development Bank in Beijing told Caixin that the plan involving the 20 billion yuan of loans was put together by its local branch but has not been approved by head office. It conflicts with the policies of the China Banking and Insurance Regulatory Commission (CBIRC) and as compliance is a red line that cannot be crossed, it can’t be approved. However, it’s possible that the finance bureau of local government wanted to float the possibility with the central government.

“The final decision-maker will be the Ministry of Finance, China Development Bank will definitely make compliance its top priority,” the source said.

Zhenjiang, a port city known for producing fragrant black vinegar, has been in the spotlight over its borrowing problems as repayments on billions of yuan of debt loom. It had racked up nearly 393.4 billion yuan of interest-bearing liabilities by the end of 2017 through LGFVs. Zhenjiang is the most debt-laden city within Jiangsu, which itself is one of the most indebted provincial-level regions in China.

As of Feb. 25, the city’s LGFVs had 115 outstanding bonds involving a total principal of 88.21 billion yuan. Its other liabilities are spread across other channels including public-private partnership projects, off-balance sheet loans, and government service-procurement contracts.

Reflecting the growing financing and liquidity problems of the local government and its LGFVs, S&P Global Ratings cut its ratings on Zhenjiang Transportation Industry Group Co. Ltd., one of Zhenjiang’s LGFVs, to BB- from BB in September, citing “significantly heightened refinancing risk” and “insufficient monitoring and control over the company from the Zhenjiang municipal government.”

Lou Qinjian, the party chief of Jiangsu Province, warned in an internal meeting in January that the Zhenjiang government had shortcomings in several key areas of supervision, which led to prominent risks in its implicit local government debt, and potential corruption problems.

The story has been corrected to reflect that the local government has the say to its own graft-buster and finance bureau.