By Su Huixian and Ren Qiuyu 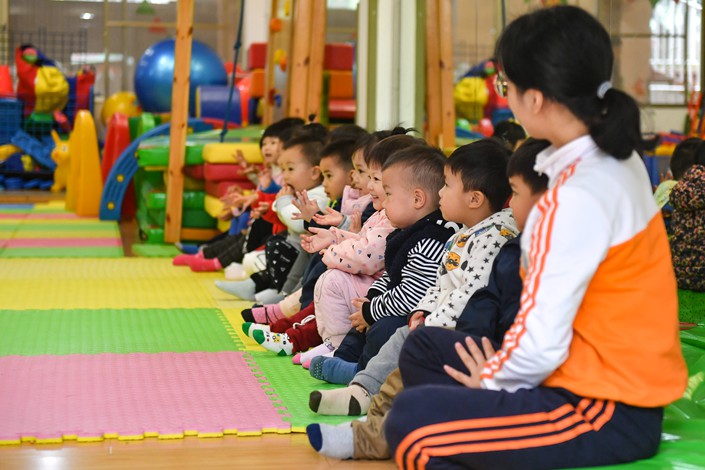 China’s State Council is considering a proposal from the National Health Commission to improve public nursery and child care services for children under the age of 3, Caixin has learned.

The proposal suggests that the government should play a role in organizing infant and child care services. The plan calls for convenient, safe, reliable and reasonably priced child care services for families in various forms, such as full-day, half-day and temporary care. The National Development and Reform Commission — the country’s top economic planner — and the Ministry of Education should also play a role, the proposal says.

The proposal tackles a number of issues regarding early childhood care in light of scandals involving day care staff abusing children. It could also reduce at least some of the cost burden new parents face as China seeks to encourage couples to have more children. China’s birth rate dropped by 2 million in 2018, despite the government changing the one-child rule in 2015 and increasing the limit to two children per family.

According to an insider who participated in discussions for revisions of the proposal, the proposal was submitted to the State Council “long ago” but has been updated multiple times since — including just before the annual meeting of the National People’s Congress this week.

A notice from the Ministry of Education released in January — a response to NPC delegate suggestions — mentioned a 2016 survey of 10,000 mothers of children under 3 years old across 10 Chinese cities run by the National Health Commission (then the National Health and Family Planning Commission). The results were published by Yang Juhua, a professor of demographics at Renmin University.

More than one third of respondents said they needed social nursery services, but only about 6% had access to them.

Private institutions are the main providers of nursery and day care services in China, and of education to children under 3 years old. According to the survey, 78% of children receive day care from privately owned schools or privately organized centers.

“With this kind of supply structure, though private kindergartens are relatively expensive, parents have no choice but to send their children to a private institution,” Yang wrote.

Cai Jianhua, secretary and deputy director of the party committee of the National Health Commission Cadre Training Center, has promoted government intervention in early infant development and suggests that communities can play a role.

“Especially in big cities like Beijing and Shanghai, commute times are already long. Even if nurseries are set up in the workplace, children may spend a long time on the road with their parents every day,” Cai told Caixin. “From the perspective of early infant development, the closer the nursery center is to the home, the better.”

The National Health Commission proposal recommends that the government enact a “subsidized + profit-making” system for early childhood education centers, similar to the present system for preschool education. This would combine government-subsidized, fee-restricted centers while leaving the rest to the market. However, the respective proportion of subsidized centers and market-based centers is not yet known.