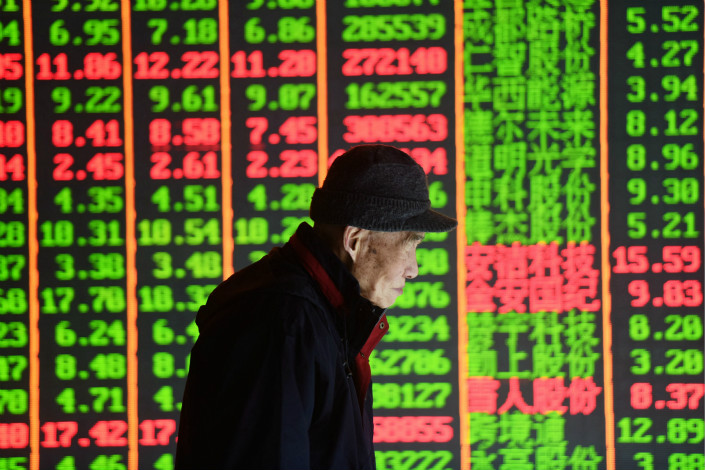 A trader in the city of Hangzhou looks on as China's stocks post worst drop in five months, reflected by green for falling stocks. Photo: VCG

(Shanghai) — Chinese mainland shares logged their biggest drop in five months on Friday, underscoring investors’ jitters over poor trade figures and a growing valuation bubble after two stocks were given a sell rating.

The benchmark Shanghai Composite Index plummeted 4.4% to close at 2,969.86, the largest decline since Oct. 11. The smaller Shenzhen Component Index lost 3.25%.

China’s stock markets have done an abrupt about-face since the start of 2019 amid eased Sino-U.S. trade tension and a slew of policy boosts, and are now traded firmly in bull territory. Shares had gained nearly 25% since January before Friday’s dive, spurring worries of a potential bubble.

“A-shares have been crazy. The gap between prices of A shares and H shares has continued to widen,” Chen Jian, an investment consultant with Datong Securities, told Caixin.

“Some worrying signs have also emerged. Funds flowing into the mainland markets through the stock connect programs with Hong Kong are starting to leave and (major shareholders) of many companies have shed their holdings by large margins since the Spring Festival. Brokerages, in very rare moves, gave sell ratings to warn investors to appropriately control their positions,” Chen said.

Yin Yue, a strategist with Lianxun Securities, pointed to fears of worsening economic fundamentals as reflected by disappointing trade figures for February, published by the government on Friday, as another trigger of the sell-off.

Yin said the poor figures, although partly distorted by the week-long Lunar New Year holiday last month, pointed to sluggish demand both at home and abroad and increasing urgency for the government to ratchet up infrastructure investment to stabilize economic growth.