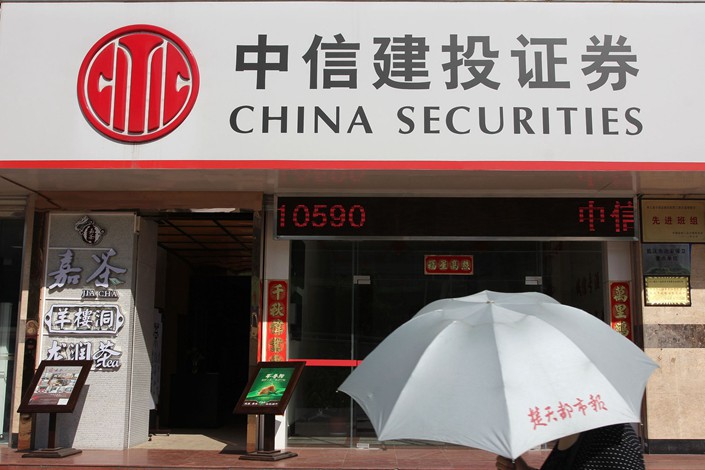 A branch of China Securities in Wuhan, Central China's Hubei province in May 2013. Photo: VCG

* Huatai Securities said the stock is in a bubble as the brokerage’s total market capitalization has “largely surpassed its domestic and global competitors, and its current PE ratio has overshot growth expectations”

China Securities is the second major financial institution on the Chinese mainland this week to get a rare “sell” rating. On Thursday, leading brokerage Citic Securities Co. Ltd. issued a sell rating for property insurer The People's Insurance Co. (Group) of China Ltd. (PICC), citing overvaluation after the stock more than doubled in this year’s bull market.

The mainland shares of both China Securities and PICC fell by the 10% daily limit after the stock market opened on Friday. China Securities’ plunge followed weeks of gains during which the stock’s price nearly tripled from 11.68 yuan ($1.74) at the start of February to 31.16 yuan on Thursday. In the past 10 trading days, the stock rose by the daily limit eight times.

China’s stock markets have done an abrupt about-face since the start of 2019 amid eased tension between China and the U.S. and a slew of policy boosts, and are now traded firmly in bull territory. Shares are up nearly 25% since January, spurring some worries of a potential bubble.

The benchmark Shanghai Composite Index slumped 4.4% on Friday, led by losses in securities firms. It was the index’s the largest single day drop since Oct. 11.

Huatai Securities said China Securities’ stock is in a bubble. So far this year, it has been trading at an average price-to-earnings (PE) ratio of 4.5, well above the range of 1.4 to 2 for other international brokerage firms.

Huatai Securities said it remains optimistic about the prospect of China’s securities industry, but the market should avoid unfounded optimism. It said that China Securities’ shares should be trading at a PE ratio of 2 to 2.5, with a target price of 13.86 yuan to 17.33 yuan. That’s about half its current price.