Update: MSCI Raises Weighting for China Stocks in Its Indexes 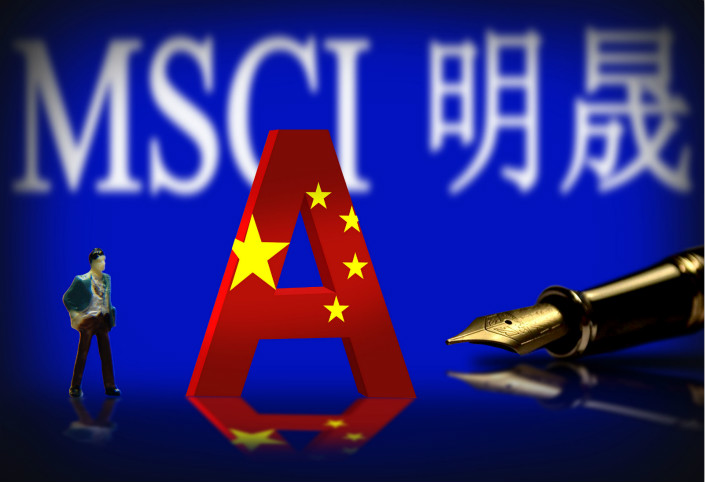 * Greater inclusion will drive more capital into the mainland market and those who have ignored the market due to its negligible weighting will likely reconsider its importance, analysts said

(Beijing) — Global index giant MSCI Inc. said Friday it will increase the weighting of China A-shares in its indexes by raising the inclusion factor to 20% from 5%, and shorten the time-frame for adding shares from the country’s startup board, marking another milestone for Beijing’s drive to boost Chinese stocks’ global exposure.

The index compiler said it would lift a cap on the free-float-adjusted market value of A-shares to 20% from the current 5% for a number of its indexes, most notably the MSCI Emerging Markets Index. It will implement the move in three stages this year instead of the two it previously proposed, lifting the inclusion factor for large-cap shares to 10% in May, to 15% in August, and to 20% in November, according to a company statement.

MSCI said in its announcement Friday that it decided to implement the change in three phases instead of two “to alleviate potential execution pressure on the implementation dates.”

After MSCI completes its plan, the overall weighting of Chinese mainland stocks in the MSCI Emerging Market Index will rise to 3.3% from the current level of about 0.7%. The index will include 253 large-cap and 168 mid-cap stocks. The shares eligible for inclusion will include 27 stocks on the ChiNext, China’s Nasdaq-like startup board, consisting of 12 large-cap stocks and 15 mid-cap stocks, the announcement said. The stocks would be added in three phases.

MSCI accelerated its timetable for including mid-cap shares, said Remy Briand, chairman of the MSCI Index Policy Committee. “We are getting back to the normal treatment of mid caps in the index more quickly, which is what investors really wanted,” he said.

However, Briand also suggested that the time was not yet ripe to include small-cap mainland shares in MSCI indexes. Most small-cap stocks are not yet available through the Stock Connect, which links mainland and Hong Kong markets.

Getting more mainland shares into much-followed global stock indexes is highly valued by the China Securities Regulatory Commission (CSRC), which has been trying for years to make Chinese shares more accessible to foreign investors.

To win support for great inclusion in the indexes, the CSRC held several roadshows so it could make its case to offshore foreign financial institutions. “At the end of the day, the (inclusion) process is driven by the authorities,” Briand said. “Our role is to explain why certain things are needed for global investors to access the market. Authorities can cope with the requirement, or delay because they need more time. That is really what’s driving the pace of inclusion.”

Many market participants have commented that MSCI’s further inclusion of mainland shares was proof that China’s measures to open its financial market are moving in the right direction.

In January, in another welcome sign for foreign investors, regulators doubled the quota for China’s Qualified Foreign Institutional Investor program to $300 billion. That channel is one of the main paths for big foreign institutions to invest in stocks, sovereign bonds, convertible debt and corporate bonds traded on the Chinese mainland. Authorities also approved Swiss Bank UBS Group to be the first foreign financial institution to hold a majority stake in a mainland securities joint venture under a national initiative to open the door wider to foreign financial institutions.

Still, several obstacles stand in the way of MSCI increasing the weighting of mainland shares beyond 20%, Briand said. “As from what we heard from our clients and also highlighted to the authorities, access to derivatives and hedging instruments will be very important.”

Greater inclusion will drive more capital, first passive, then active, into the mainland markets, continuing a trend of increasing inflows that investors have seen over the past 18 months, said Shi Bin, head of China equities at UBS Asset Management Co. Ltd. Despite this week’s stock market rally and a clear increase in investor sentiment and trading volume, mainland shares are still pretty cheap. “Like us, market participants see opportunities,” Shi said.

Those who have ignored the mainland market due to its negligible weighting in the index will likely have to reconsider its importance. “Emerging market fund managers should pay attention to what’s happening onshore in China,” said Will Stephens, Asian equities analysts with Deutsche Bank. “We expect that major benchmarks’ inclusion of A-shares is going to happen much faster than what we’ve seen in the past, so getting up the curve on this relatively new market segment is of critical importance.”

The inclusion of ChiNext-listed shares will also change the market dynamics, said David Lai, co-chief investment officer at Premia Partners Co. Ltd., a Hong Kong-based exchange-traded fund (ETF) manager. “Given that most of ChiNext’s stocks are new economy focused and mid-to-small-caps in nature, the market may shift its attention away from mega-caps,” Lai said, adding that the trend started in the beginning of February with some of the small-cap-tracking ETFs outperforming other A-share ETFs.

In the first two months of 2019, global investors have bought more than a net 120 billion yuan ($17.8 billion) in mainland shares though the Stock Connect, which links mainland and Hong Kong markets, according to financial data provide Hithink RoyalFlush Info. It was a strong start considering that the figure was 300 billion yuan for all of 2018.