Beijing’s Thirst May Be Too Much for Water Diversion Project, Adviser Says 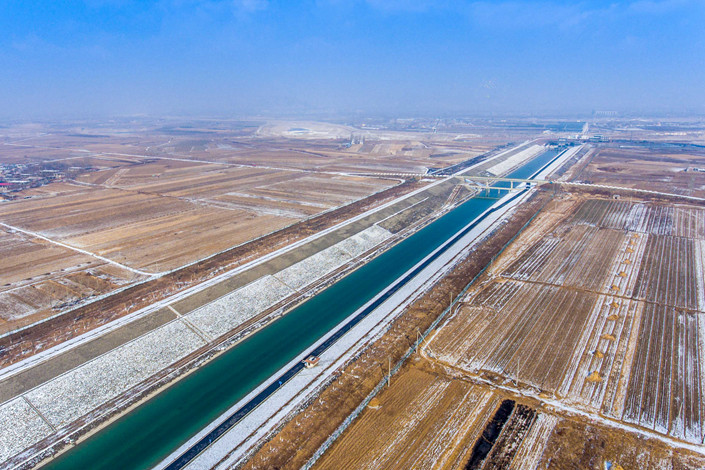 *Reliance on supplementary water from a major diversion project has slowed depletion of the capital’s reserves but threatens the supplies of other cities, a CPPCC member warned

*Better use of flood water could present a solution, he said

(Beijing) — Increasing demand and uncertain supply may imperil the source of the water that Beijing receives from the South-to-North Water Diversion project, a member of the country’s top advisory committee said.

Beijing has become over-reliant on water diverted from the Danjiangkou Reservoir, which is part of the Yangtze River system in Hubei province, said Zhong Zhiyu, chief engineer at the Changjiang Institute of Survey, Planning, Design and Research.

The South-to-North Water Diversion Project consists of three man-made networks of tunnels and canals that divert water from the southern tributaries of the Yangtze River to China’s dry north. The first phase of the eastern route opened in 2013 and the western route is still being planned, but the full length of the central route, which supplies water to Beijing, Tianjin, Hebei province and Henan province went into operation in December 2014.

The project was designed to provide supplementary water for daily use, but Beijing and Tianjin have grown too dependent on the water coming up through the more than 1,200 kilometers (788 miles) of canals, Zhong said at the annual “Two Sessions” meeting in Beijing this week.

Currently, 70% of Beijing’s water prepared for daily use comes from the diversion project, greatly reducing the amount of water in the Danjiangkou Reservoir. While the greater reliance on supplementary water has slowed the depletion of already-low underground water sources in the area, potential exhaustion of the reservoir could have serious consequences for cities that rely on the diverted water, Zhong said.

The second problem that Zhong noted was that overall demand for water is continuing to increase. With economic development, populations in regions getting diverted water through the massive infrastructure project have grown, requiring more water. The government’s project to meld Beijing, Tianjin and the northern province of Hebei into a single enormous metropolitan area, plus the construction of the Xiongan New Area, will also increase demand for water in the Beijing region, Zhong said.

The overall increase in demand will further deplete groundwater in the parched north of China, heightening demand for diverted water. In 2017, the Danjiangkou Reservoir had stored a relatively large amount of water, allowing for the transfer of more than 200 billion cubic meters (706 billion cubic feet) of supplementary water since the central route opened, according to the official Xinhua News Agency. But the reservoir is not always going to be a reliable source.

The Han River fills the reservoir, and in recent years the river has deposited an abundant amount of water. However, it was only three years ago that the river suffered a fourth consecutive year of low levels.

In addition to the South-to-North Water Diversion Project, other water diversion projects are also underway. They include a project in Shaanxi province called the Hanjiang to Weihe River Transfer Project, which will divert water from the province’s south to its arid north, as well as the North Hubei Water Resources Allocation Project, which will divert water from the Danjiangkou Reservoir to parts of northern Hubei province. These projects, which will handle an estimated 1.6 billion cubic meters of water each year, will place even greater strain on the water supply, Zhong said.

He suggested that the government must do more to research how to make better use of flood water. He also urged the rapid development of a project to divert water from the Yangtze to the Han River to prevent the latter from getting too low.