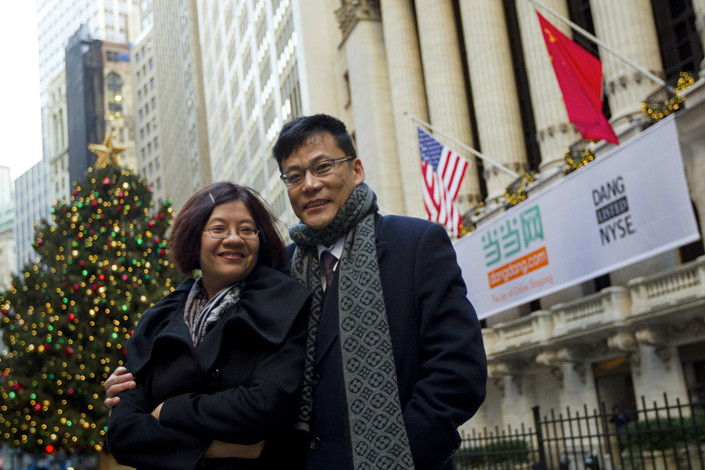 Dangdang co-founder and chair Peggy Yu stands with her husband, co-founder and CEO Li Guoqing, outside the New York Stock Exchange, where their company listed on Dec. 8, 2010. Photo: VCG

While those outside China may not be familiar with Dangdang Inc., the company used to be a household name. One of the country’s earliest e-commerce players, Dangdang’s origins stretch back to 1999 when it started as an online bookseller, just like Amazon Inc.

In its heyday, it went on to float on the New York Stock Exchange in 2010 — making it the first Chinese e-commerce site to list in the U.S. It was later privatized in 2016.

China’s e-commerce landscape has moved on in leaps and bounds over the last 20 years. Fierce competition, failings in decision-making and a conservative approach to expansion have seen Dangdang give way to rivals Alibaba Group Holding Ltd. and JD.com, Inc., industry observers have argued.

Dangdang is now mostly focused on the niche online book market, a sector worth 45.9 billion yuan ($6.84 billion) in 2017 — against 24 trillion yuan for the overall e-commerce market that year.

Dangdang, which rejected a $150 million takeover bid from Amazon in 2004, missed out on a second chance at a cash injection last year, when Chinese conglomerate HNA Group aborted a 7.5 billion yuan deal to acquire it.

The company grabbed the media spotlight in February, when the husband-and-wife founders officially ended their business relationship. Husband Li Guoqing said he was no longer part of the company he started with his wife, Peggy Yu, and would pursue plans to launch other book-related ventures.

When Yu, who goes by the English name Peggy, spoke to Caixin four days after Li’s departure, it was her first interview in 10 years. Recalling Dangdang’s ups and downs, Yu said she made three mistakes that brought the company to where it is today. But she said she has no regrets and is happy with the state of the business — which saw strong profit growing in 2017 and 2018.

1. Spouses are not necessarily the best business partners

“Looking back, it’s not a good business model to run a startup with your spouse,” said Yu. The mixing of the two roles creates obstacles sometimes when making decisions, she admitted.

A Dangdang staff member told Caixin that the couple used to have heated arguments in the middle of meetings where one might leave the room, leaving those in attendance bemused.

Yu said her husband is an ambitious person, even egotistic. He was frustrated to see e-commerce latecomers surpass Dangdang.

Dangdang went public in New York in 2010, ahead of its rivals Baidu, Alibaba and JD.com. However, it immediately dipped into the red and stayed there for three years, before crawling back to profitability in 2014. It was privatized in 2016.

Yu said she did not initially intend to run the business together with her husband. She planned to leave Dangdang when it first won financing and indeed had a job lined up. But she decided to stay on as responsibilities grew with the company’s expansion.

2. Go with the flow or defend your turf?

The e-commerce market in China began to take off in 2012, turning into a battleground as companies vied for market share. Alibaba and JD.com burned cash to rapidly expand their product range, build up supply chains and offer big discounts to lure customers.

Dangdang was no exception. From its starting point as a bookseller, it diversified into maternal and childcare products, electronics and clothing. However, these efforts were abandoned, as Yu said Dangdang had to put its investors’ interests first and couldn’t risk its profitability to grow its market share.

In one sense, the strategy worked. Dangdang made a profit of 88 million yuan in 2014, after three years of consecutive losses, and has continued to turn a profit in the years since. But that came with a price in the long-term — it lost ground to Alibaba and JD.com, which now sell a dizzying array of products on their platforms.

“I decided not to go with the flow to win market share during the perfect moment,” Yu said. “That was a strategic mistake.”

Yu said there was a period in which Dangdang was so focused on winning the e-commerce war that it overlooked the importance of corporate governance.

The wakeup call came in 2012, when Dangdang discovered an internal bribery case. Three employees, including a sales director, took kickbacks in exchange for gift vouchers and siphoned off 150 million yuan over six months. The culprits were later jailed.

The incident helped Yu realize the importance of strong corporate governance. Management must be on the same page in terms of corporate values and action plans to realize its goals.

“We were too loose then,” Yu said. “We didn’t know our corporate values and missed out on recruiting outside talent (to strengthen company fundamentals.)”