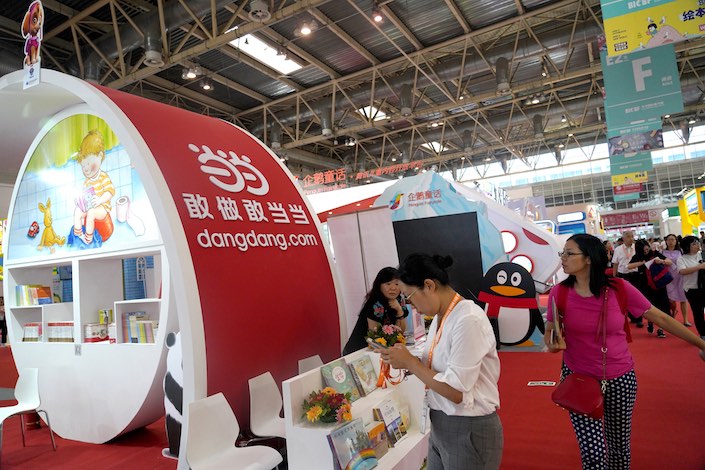 HNA Technology said in April that it planned to take over Beijing-based Dangdang in a deal valuing the e-commerce company at $1.2 billion. Photo: VCG

“The company had not reached agreement with transaction parties and the deal now faces significant uncertainties,” HNA Technology said Wednesday in a filing (link in Chinese) with the Shanghai stock exchange.

HNA Technology, formerly known as Tianjin Tianhai Investment, said in April that it planned to take over Beijing-based Dangdang in a deal valuing the e-commerce company at 7.5 billion yuan ($1.2 billion).

According to filings at that time, HNA Technology would pay 3.44 billion yuan in cash and borrow 4.06 billion yuan for the deal.

The deal raised eyebrows in the market, coming as HNA was grappling with a huge pile of debt after years of aggressive spending. HNA Technology has been repeatedly questioned by the Shanghai exchange over issues including the deal, according to the filing.

HNA Technology, the investment arm of the aviation-to-finance conglomerate HNA, said it expected the Dangdang deal to improve its business structure and enhance synergies as the company transitions into the information and high-tech sector. In 2016, HNA Technology acquired Ingram Micro, a distributor of global information-technology products, for $6 billion in one of China’s largest high-tech purchases in the sensitive U.S. market.

However, “there had been a prolonged period since the company announced the plan and capital market conditions had since changed a lot,” HNA Technology said in the filing.

HNA Technology said it will hold an investors meeting Sept. 21 to explain the decision. The company’s stock remains suspended.

Dangdang confirmed the end of the deal in a brief statement on its official Weibo account. Dangdang didn't discuss the impact of the termination but said the company's sales and profit have maintained steady growth in recent years.

“HNA is a respectable group that has expanded its territory over the past 25 years, but it is currently dealing with liquidity problems in its development process,” Dangdang said.

Hainan-based HNA was once one of China’s biggest dealmakers abroad, snapping up $50 billion of assets in aviation, tourism, real estate and other sectors. But its global ambitions ran into trouble late last year when Chinese regulators tightened scrutiny of companies’ debt-fueled investments.

HNA has stepped up a massive sell-off of assets this year to reduce debt and shift focus back to its core aviation business. It has also shaken up its management in a bid to bolster its business and win back investor confidence after co-founder and co-Chairman Wang Jian died in an accident in France in early July.

Dangdang is one of China’s earliest e-commerce platforms, starting in 1999 as an Amazon.com-like book retailer. It went public on the New York Stock Exchange in 2010 but was later delisted.

Dangdang has struggled to keep pace with rapidly expanding rivals such as Alibaba Group and JD.com amid fierce competition in China’s digital commerce market. The company has stuck mainly in the niche online book market, a sector worth 45.9 billion yuan in 2017, compared with the 24 trillion yuan overall e-commerce market including clothing, electronics, groceries, fresh foods and a wide range of other goods.