By Ji Tianqin and Li Rongde 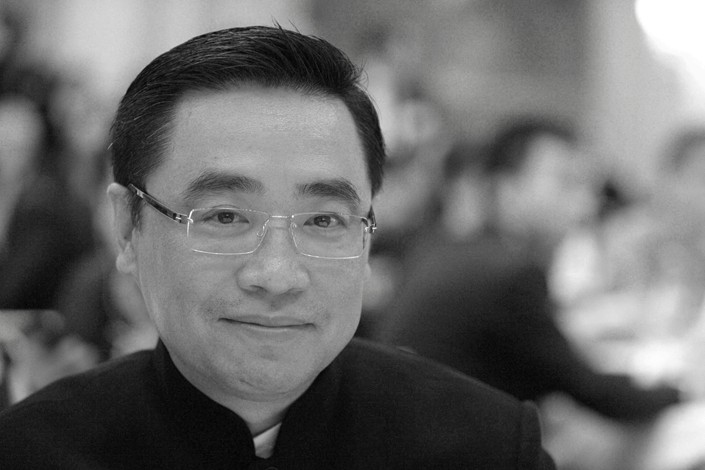 The sudden death Tuesday of HNA Group Co-Chairman Wang Jian has cast a shadow over the future of the company, which was already coping with a large debt and a central government crackdown on outbound investment. Photo: VCG

For nearly three decades, Wang Jian was one of the twin engines that turbocharged Chinese conglomerate HNA Group into one of the world’s top 500 companies.

His sudden death Tuesday in an accident in France has cast a shadow over the future of HNA, China’s most acquisitive firm and one that already had its hands full coping with debt and Beijing’s crackdown on outbound investment.

Wang, 57, fell more than 10 meters (32.8 feet) off a wall while taking photographs during a visit to Avignon in Provence, an area popular with tourists.

Wang was co-chairman of HNA alongside Chen Feng — though the older Chen was officially one rank above Wang.

But within the company, Wang was likened to a Caesar figure — a king without a crown — as he orchestrated the most significant moves in HNA’s history for nearly three decades.

Chen, now the company’s sole chairman, is a firebrand known for his temper and outbursts, directed at anyone who crosses him, according to a former HNA employee who served as a senior executive around 2000.

But the softer-spoken Wang, often donning a gentle smile, commanded more authority, according to the former employee.

“If Wang Jian gave you a thump-down, you were screwed, and there was little even Chen Feng could do to help,” the ex-employee said.

Wang and Chen were colleagues when they were both office workers at the planning department of the Civil Aviation Administration of China in the 1980s. In 1989, the Hainan provincial government founded HNA. The next year, the pair quit to join the new company. They were both soon became vice presidents.

Wang had long been defensive about HNA’s pedigree as a state-backed company and the early provincial government funding.

“There were already several teams before us that had failed to get the company off the ground,” Wang said in an earlier interview with Caixin, in which he stressed the role he played in making HNA a global player.

Under his leadership, the company undertook a spate of aggressive overseas acquisitions in recent years. A study by Caixin found that HNA has spent at least $80 billion in foreign acquisitions, quadruple the amount doled out by the now-scandal-ridden Anbang Insurance Group.

In June 2017, China’s banking regulator directed lenders to examine their exposure to some of the most acquisitive Chinese companies, including HNA, Dalian Wanda and Fosun International Ltd. The resulting findings shed light on debt issues at HNA.

In interviews, Wang sought to play down the impact of the regulatory order on his company’s liquidity. Instead, he said HNA was being squeezed by outbound investment curbs imposed by China’s top economic planning agency, the National Development and Reform Commission, which was concerned about possible bubbles and excessive overseas borrowing by Chinese companies.

HNA employees told Caixin that the company has indeed faced defaults since the second half of 2017, but that they usually lasted for one or two days and were then repaid. The company is in an increasingly uncertain position as more borrowings approach their maturity, according to the employees.

Last year, S&P Global cut HNA’s credit rating to B- from B+, citing its “aggressive financial policy” and tightening liquidity amid looming debt maturities. “We will closely monitor HNA Group’s access to capital markets and funding costs to determine whether additional actions are necessary,” S&P said.

The company was forced to turn to massive sell-offs to cope with the liquidity pressure. It has sold assets worth 110 billion yuan since the beginning of the year, including stakes in three listed companies under Hilton Hotels. That accounts for about a third of what Wang earlier told Caixin that the company planned to offload for the whole year.

Wang had told Caixin that he was doing personal soul-searching over his role in the company’s acquisitions and forced sell-offs. “We were too aggressive and kept our profile too high, and we failed to hold true to our mission,” he said.

More than 52% of HNA is owned by two nonprofit foundations, including Hainan Cihang Charity Foundation, registered in the United States. Twelve senior executives, including Wang and Chen, own the rest of shares, but they all agreed to donate their stakes to the foundations upon leaving the company or after they die.

“In so doing, the company can live and grow endlessly,” Wang said. “That’s what has made HNA special.”