Regulators Set Up Committee to Save Debt-Ridden Conglomerate 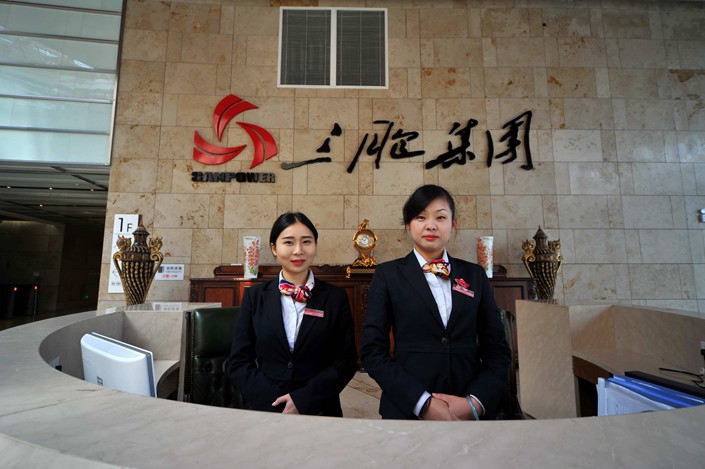 Property-to-pharmaceuticals group Sanpower Group is the latest privately owned conglomerate to run into trouble after loading up on 63 billion yuan ($9.2 billion) of debt to finance an aggressive expansion strategy at home and overseas that included the purchase of House of Fraser, the British department store operator.

The company’s financial position has grown so precarious that the banking regulator and local governments in Jiangsu province have stepped in to set up a creditors’ committee to resolve its debt problems, sources close to the matter have told Caixin. Bank of Nanjing, one of the biggest creditors, is leading the negotiations.

The committee, which held its first meeting on Wednesday, is made up of officials from the Jiangsu provincial government; the municipal government of Nanjing, where Sanpower is based; local financial regulators; institutional creditors; and representatives from the company, Caixin has been told.

The intervention comes as Sanpower, controlled by local tycoon Yuan Yafei, is struggling to repay its debts amid a crackdown on risky lending and “shadow banking” activities that have ensnared many highly leveraged conglomerates. Growing caution among bond investors is also making it more difficult for many businesses to refinance their borrowings.

“This year we have felt an evident change in the fundraising environment away from easy money to a much more cautious stance, even for private enterprises,” Sanpower Senior Vice President Yue Lei told Caixin in an interview in mid-August. “The deleveraging campaign has led to a breakdown in off-balance-sheet funding, and the milk of funding has totally dried up.”

Sanpower has also pledged almost its entire 21.5% stake in Jiangsu Hongtu to brokerages in exchange for loans and put up 83% of its 27% stake in Shanghai-listed Nanjing Xinjiekou Department Store Co. Ltd., exchange filings show.

According to Yue, the fuse that lit the debt time-bomb came in June, when Sanpower missed a payment on a 550 million yuan debt that had it guaranteed for Nanjing-based Yurun Group Co. Ltd., the parent of troubled Hong Kong-listed Yurun Food Group Ltd. Yurun defaulted, leaving Sanpower on the hook. Although Sanpower later managed to repay the debt, the default triggered panic among Sanpower’s creditors, Yue said.

Creditors and financial institutions became increasingly concerned about the company’s financial health, and some asked the courts to freeze some of its assets. Although Sanpower hasn’t defaulted on its debts yet or missed repayments, creditors that include Industrial and Commercial Bank of China, Hengfeng Bank and Daye Trust have sought court orders to prevent shares in listed companies pledged as collateral by Sanpower from being dumped into the market and further depressing their prices.

Yuan, the company chairman, admitted in July that the group was facing cash flow problems, and the group announced a plan to raise 10 billion yuan by the end of 2018 by offloading assets. So far, sales have included its stake in House of Fraser. Also on the block are real-estate projects in China, and businesses in retailing, electronic gadgets, and finance. The group now plans to focus on its core assets in healthcare and pharmaceuticals, Yue told Caixin.

Sanpower’s liquidity crunch has been exacerbated by the sharp fall in China’s stock market — the benchmark Shanghai Composite Index has been one of the world’s worst performers this year, slumping 18.6% as of Sept. 6. Having pledged most of its holdings in its two Shanghai-listed subsidiaries as collateral for loans, it has suffered significant losses through having to pay margin calls as the value of the shares dropped.

The double whammy of bearish market sentiment and Sanpower’s debt crisis sent shares of Nanjing Xinjiekou Department Store plummeting by the 10% daily limit for eight straight days in June, losing two-thirds of their value. The stock closed at 11.38 yuan in Shanghai on Friday, down from 35 yuan in mid-June.

Yuan, who quit his job as a low-ranking official with the Nanjing government more than two decades ago to sell computers, built Sanpower into a sprawling conglomerate with assets of more than 80 billion yuan. He first made headlines outside China in 2014 when Nanjing Xinjiekou Department Store paid 450 million pounds for 89% stake of the historic British department store operator House of Fraser. An overseas acquisition spree from 2014 to 2016, which Israeli health care group Natali and American pharmaceutical firm Dendredon, saw the group transform into a health-care-to-property conglomerate with a total assets of 88 billion yuan at the end of 2017.