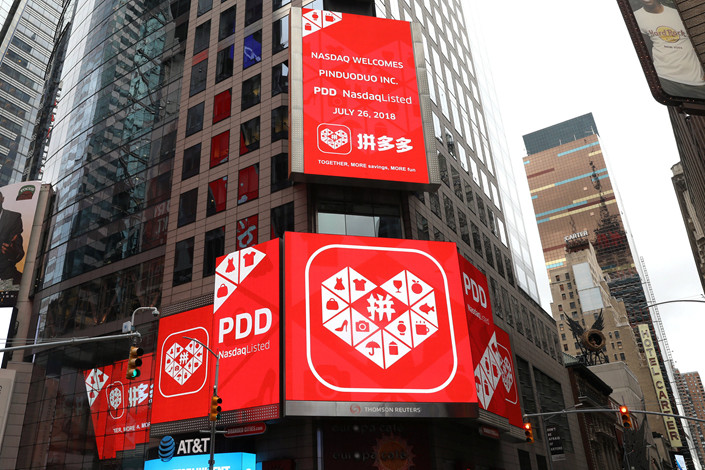 Net losses reached 10.3 billion yuan ($1.5 billion) in 2018, compared to 498.7 million yuan the year before, according to its annual report released on Wednesday.

Gross merchandise volume (GMV) — the total value of orders of merchandise on the platform regardless of whether they are sold, delivered or returned — hit 471.6 billion yuan, up from 141.2 billion the year before. This growth was said to be driven by an increase in users and doubled annual spending per active buyer.

In an earnings call announcing the results, Pinduoduo chairman and CEO Huang Zheng said the company would invest in research and development, sales and marketing, and would continue to grow its user base.

Pinduoduo was founded in 2015 in Shanghai as a low-priced “group buying” startup. It rose to prominence in an e-commerce market dominated by the likes of Alibaba Group Holding Ltd. and JD.com Inc. by encouraging buyers of groceries, electronic devices and other goods to buy in bulk alongside friends and relatives in order to access discounts. It is now one of the country’s largest retailers.

The company went public on the Nasdaq in July, raising $1.63 billion in one of the year’s biggest initial public offerings by a Chinese company. However, shares plunged within a week of its strong debut amid investor concerns about counterfeit goods being sold on the site.

Still, the platform expanded rapidly. Its active buyers — the number of user accounts that placed at least one order last year — were up 71% to 418.5 million, surpassing JD.com’s 305 million for the first time. It still lags significantly behind the 636 million users of Alibaba Group’s Taobao platform.

The expansion came at a cost. The company also reported 21 billion yuan in operating expenses, a massive increase on 1.6 billion yuan the previous year. This came after the company poured money into advertising, branding campaigns and promotions, such as sponsoring TV shows and running adverts in primetime during the FIFA World Cup.

Growth of active buyers of Pinduoduo is expected to slow given the current large user base, said Li Chengdong of Dongge Investment, a Beijing-based tech consultancy. He predicted it will grow a more modest 30% to between 550 million and 600 million this year, compared to last year’s growth of 71%.