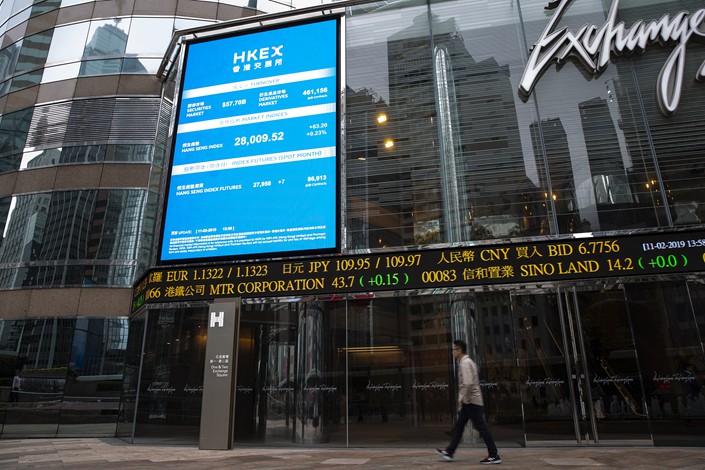 Hong Kong’s securities regulator has fined four global brokerage firms, including an arm of Swiss banking giant UBS AG, a combined HK$787 million ($100 million) for failing to do proper due diligence on companies they sponsored for initial public offerings (IPO).

The fines show that the city’s financial regulator is taking a tougher stance against IPO sponsors that fail to meet their obligations — to the detriment of investors.

The Securities and Futures Commission (SFC) slapped UBS Securities Hong Kong with a HK$375 million fine, the highest given to any of the four firms, and suspended it from sponsoring IPOs for 12 months, according to four separate statements issued by the commission.

The commission also fined Morgan Stanley Asia HK$224 million, Merrill Lynch Far East HK$128 million and Standard Chartered Hong Kong HK$59.7 million for their involvement in the IPOs of China Forestry Holdings Co. Ltd., Tianhe Chemicals Group Ltd., and another company that it did not identify, according to the announcements.

Over the past few years, the commission has been increasingly scrutinizing IPO listings in the name of investor protection. Last year, the regulator announced that it was investigating 15 sponsors of Hong Kong IPOs. In January 2017, the SFC sued UBS for its role in the listing of China Forestry, a case that the commission highlighted in its announcements.

After UBS become one of the sponsors of the logging company in mid- 2009, it failed to verify China Forestry’s assets, approximately 171,780 hectares of forest in Yunnan and Sichuan provinces, which were listed in the company’s prospectus, the SFC said.

“Although UBS claimed that it had carried out physical inspections at a number of China Forestry Group’s forests in Sichuan and Yunnan in 2008 in its then capacity as one of the joint bookrunners, it was unable to provide any inspection records or identify the precise locations of the inspections,” the SFC said.

Co-sponsored by UBS and Standard Chartered, the logging company went public in Hong Kong in 2009 and later collapsed due to fraudulent accounting. It was delisted from the Hong Kong Stock Exchange on Feb. 24, 2017. Standard Chartered shut down its IPO sponsoring service in 2015.

The case of Tianhe offers another example of the SPC’s crackdown. Co-sponsored by UBS, Morgan Stanley and Merrill Lynch, the Chinese mainland-based chemical manufacturer floated its shares in Hong Kong in 2014. Three months later, the company’s stock plunged after reports emerged that it had inflated revenues. Shares of Tianhe were suspended seven months after the IPO due to a delayed earnings report and allegations of a falsified information disclosure. As of Friday, the stock had not resumed trading.

The regulator’s crackdown serves as a warning for brokerages that commit misconduct, and it will have an effect on their reputation, a source in charge of a foreign investment bank’s capital market business told Caixin. However, “such a small penalty is negligible for an investment bank,” the source said.

The source also pointed out that there’s still lack of clear criteria for such punishments. “The regulator’s different treatment of UBS and Morgan Stanley sends out a message: one problematic project is fine; two is also fine; but when it comes to three, then you need to worry about your license.”

Instead of relying on regulation to keep investment banks in line, the source suggested that regulators draft laws and improve the framework for dealing with investor complaints.

UBS said in a Thursday statement that it is “pleased to have resolved these legacy issues relating to our Hong Kong IPO sponsorship license,” and it’s mainland business will not be affected by the penalties. Morgan Stanley and Merrill Lynch declined to comment, while Standard Chartered replied Friday that it remains committed to ensuring compliance and continues to invest in improving standards across all of its businesses.