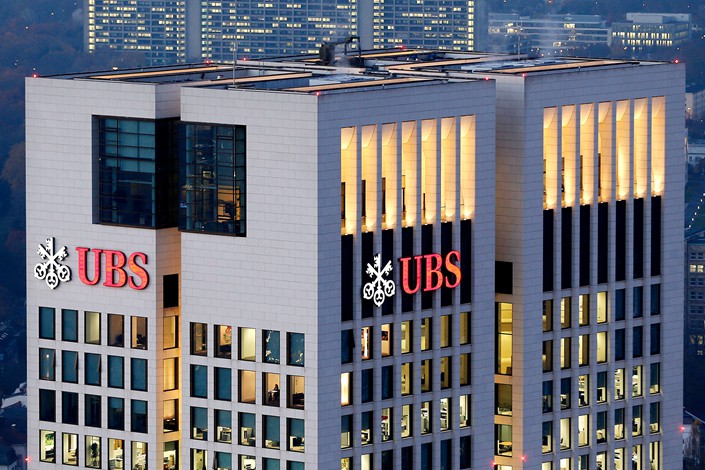 The German headquarters of Swiss Group AG is seen in Frankfurt. Photo: IC

UBS Group AG is considering increasing the capital of its Chinese securities arm as it seeks to ratchet up its brokerage business on the mainland now that it owns a controlling stake, an executive with the Swiss financial giant said Monday.

UBS Securities Co. Ltd. may “gradually” increase its capital to leverage up its mainland brokerage businesses, which include margin financing and derivatives, so it can better take advantage of its 51% stake in the mainland firm, said Thomas Fang, managing director and head of China equities at UBS Group. Fang is one of the top executives at the bank pushing UBS’ brokerage business in China.

UBS Group finalized the deal on Dec. 24 to increase its stake in UBS Securities from 24.99% to 51%, the Swiss bank said, becoming the first foreign bank to take a controlling stake in a Chinese securities firm. Other big foreign banks, such as U.S.-based JPMorgan Chase & Co. and Japan’s Nomura Holdings Inc., have followed its lead.

In April, the government lifted the 49% shareholding cap on brokerage joint ventures that it had imposed on overseas financial institutions. The change was part of a national push to further open financial markets to create a more-level playing field for foreign and domestic firms. UBS Securities was established in 2006.

“One of the key changes of becoming a controlling stakeholder is that you will be able to get more involved in capital-intensive businesses,” Fang said, adding that the position of controlling shareholder will allow the firm to achieve a balance between risk and return.

Fang added that moving into capital-intensive businesses is a particular strength for multinational investment banks because of their large balance sheets and their network of overseas clients.

UBS’ investment division is likely to leverage its cross-border businesses, bringing in foreign investors who are interested in A-shares, while taking Chinese companies out to overseas markets, which will help it stand out among local competitors, Chin said.

One year after China announced sweeping plans to further open up its financial markets, foreign firms such as banks and asset managers are preparing to take advantage of the change.

Sixteen private fund managers established by big foreign institutions such as BlackRock Inc., Fidelity International and UBS Group’s UBS Asset Management have entered the China stock and bond markets, while the portion of foreign holdings in China’s onshore equities have tripled to 6% in 2018, reflecting foreign investors’ confidence in Chinese assets.

As head of the QFII business for the first foreign bank to be granted a QFII quota in 2013, Fang said he is very “hopeful” to see the change take effect this year.