In Depth: Does China Have a Prescription Opioid Problem? 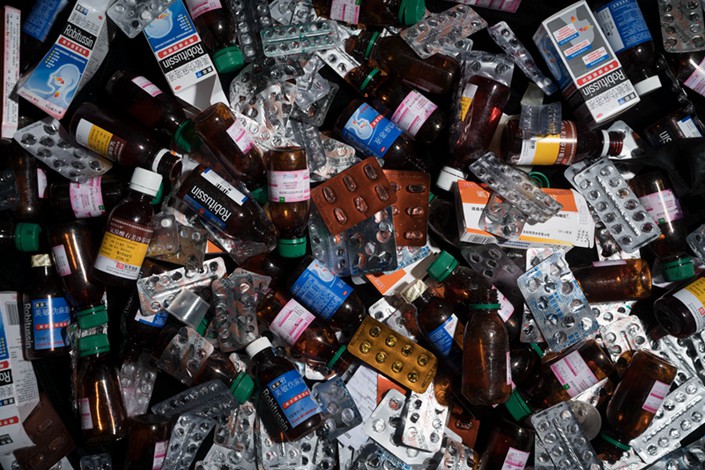 In late 2017, a 30-year-old hardware engineer at a consumer electronics company in Shanghai consulted his doctor about pain related to gout. The doctor prescribed a 10-day course of Tailening — the Chinese commercial name of a pain-relief drug containing oxycodone and acetaminophen.

The following May, the same man fell off a bicycle and broke his arm. He was again prescribed Tailening. Zhang Xiang, the patient, says he took no more than four tablets a day, strictly following the doctor’s instructions, and hardly suffered any pain during the three-month recovery from his arm fracture.

But when he tried to stop taking Tailening, Zhang experienced unexpected symptoms. He suffered serious insomnia, barely catching more than three hours of sleep a day, even with the help of sleeping pills.

“When I went out in the morning, if I didn’t take the drug, I would experience dizziness, sweating and feel unfocused,” Zhang said. Like other patients in this article, the patient’s name has been changed to protect his identity.

Oxycodone, a powerful and addictive synthetic opioid used in pain medication, is at the center of a crisis that has killed more than 200,000 people from overdoses in the past 20 years in the U.S., where it’s marketed as the prescription drug OxyContin.

In China, pain medication isn’t as widely used, and opioids rarely make headlines. From 2014 to 2016, 28 daily doses of oxycodone were consumed for every 1 million inhabitants of China on average, including people using the drug as prescribed by doctors, according to a 2017 United Nations report. That compares with 6,991 doses a day for each 1 million Americans.

But in China, a debate has emerged over how to help people like Zhang who become inadvertently addicted to oxycodone through the prescription drug Tailening, without depriving patients undergoing surgery and cancer treatment of crucial pain management.

Users of opioids accounted for 38.1% of the 2.5 million people known to misuse drugs in China in 2016, the last year for which government data is available. No official figures specific to oxycodone addiction in China have been released, but interviews conducted by Caixin suggest that the use of oxycodone in the form of Tailening is an established problem in some communities.

Like Zhang, Jiang Min started taking Tailening for medical reasons. An emergency department worker at a hospital in the central Chinese city Changsha, Jiang said he started taking the drug for back pain. At first he enjoyed the euphoria he experienced after taking it. Gradually, however, Jiang found himself becoming physically dependent on increasing doses of Tailening just to feel normal. Jiang told Caixin he has now attempted three times to stop using the drug without professional help.

Others, like 31-year-old Cao Feng, turned to Tailening after a history of misusing other prescription drugs. Cao, who lives with his parents in Shenyang, a city in China’s northeastern rust belt, said he became addicted to tramadol, another opioid pain medication, after friends introduced him to it at the age of 17. He said he turned to Tailening after tramadol was added to China’s restricted drugs list and became harder to find.

In most cases, there’s significant misinformation about Tailening. Cao told Caixin his acquaintances said Tailening was not addictive. Gao Li, Cao’s mother, said she “knew using injected drugs could be addicting but didn’t know that oral medication could also be.”

One physician who asked not to be named told Caixin that misinformation is a major part of the problem — pharmaceutical salespeople marketing Tailening often offer literature asserting that it has “more potent analgesic effects” and “lower risk of addiction.”

While the single-drug formulation of oxycodone is considered a controlled medication in China, Tailening, which combines oxycodone and acetaminophen, is currently not on China’s controlled drugs list and can easily be prescribed by physicians.

Tailening entered the Chinese market in 1998 and is produced by U.S. drug company Mallinckrodt LLC. According to the company’s 2017 fiscal year financial report, Tailening, along with another oxycodone product, generated $78.8 million in sales.

Mallinckrodt did not respond immediately to Caixin's request for comment.

When Tailening first entered the Chinese market, it was classified as a controlled substance. But, in 2004, national drug authorities issued new guidelines allowing combination drugs containing a limited amount of certain controlled substances — like the oxycodone in Tailening — to be sold as regular prescription drugs, to help meet the needs of “numerous pain patients medically requiring pain management.”

Local drug regulators in Beijing and Shanghai have also warned about possible abuse of Tailening. On Jan. 30, 2014, Shanghai’s food and drug administration issued an urgent notice to more strictly control sales of oxycodone after one pharmacy in the city was found to have sold hundreds of boxes a week. But few other local governments have expressed similar concerns, Caixin learned.

Tailening’s noncontrolled status has emboldened pharmacies and unlicensed dealers to sell it liberally. In Shenyang, where Caixin interviewed multiple Tailening users, one in three pharmacies would sell Tailening without a prescription, according to Yu Nan, a 24-year-old local resident.

While pharmacies have been penalized in the past for similar behavior, the penalties aren’t as serious as those for drug trafficking, which in China include the death penalty.

Since Tailening isn’t a controlled drug, selling it isn’t considered drug trafficking, “which is why pharmacies dare to sell them,” one police officer in Shenyang told Caixin.

Ji Lianmei, a former pharmacist at the private Beijing United Family Hospital, told Caixin she thought Tailening should be strictly controlled like other opioids.

Other experts interviewed by Caixin called for measured consideration. Adding addictive drugs like Tailening to restricted lists makes them more difficult for ordinary people to obtain and misuse, but that also makes it more difficult for doctors to prescribe drugs to patients who need them. Chinese patients are already under-prescribed painkillers even in situations like cancer treatment, Hao Wei, a researcher at the Second Xiangya Hospital of China’s Central South University, told Caixin.

That was what happened in 2008 when tramadol, a potent pain medication that entered the Chinese market in 1994, became a controlled substance. Misuse of tramadol, which can induce euphoria and hallucinations, drew regulatory attention in China when reports emerged that the number of people misusing tramadol in eastern China’s Guangdong province increased from 11 in 2004 to 4,492 in 2006.

But adding tramadol to the controlled substances list didn’t eradicate the misuse of pain medication in China. People simply turned to alternatives like Tailening, as in the case of Cao Feng.

Liu Zhimin, a professor at the National Institute on Drug Dependence at Peking University, warned against making a rash decision on Tailening.

“There must be an epidemiological investigation,” Liu said. “The questions to be explored include how many people are abusing the drug? Who is using it? What is the cause and nature of this abuse?”

“Data must be collected, and then evaluated and decided by experts,” Liu said.