In Depth: The Hurdles ‘The Wandering Earth’ Overcame to Become a Smash Hit 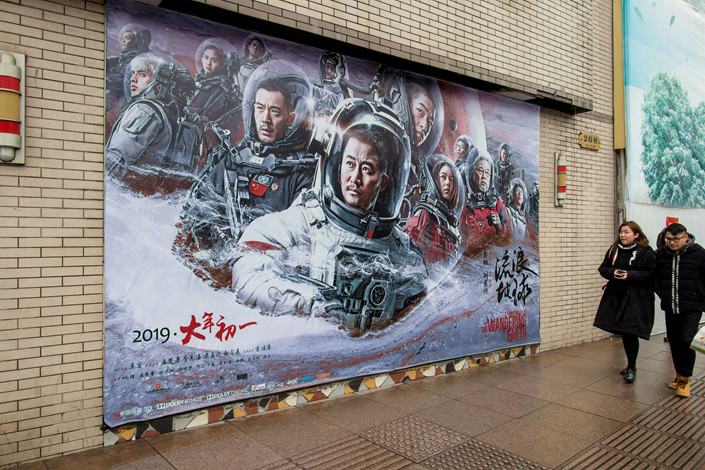 Over four years of devotion, 7,000 crew members and several investors willing to take the plunge — it took a lot for Chinese sci-fi blockbuster “The Wandering Earth” to become a surprise hit.

The film, released during February’s Lunar New Year holiday earned over 4.63 billion yuan ($689.74 million) as of March 19. That made it China’s second-highest grossing film of all time, after 2017 action flick “Wolf Warrior 2.”

“The Wandering Earth” is an adaptation of a novella by acclaimed Chinese sci-fi author Liu Cixin, winner of the prestigious Hugo Award for sci-fi fiction writing. Set in a distant future in which the sun is about to expand into red giant and devour the Earth, engineers from around the world scramble to devise a plan to move the planet into a new solar system using giant thrusters. Things take a turn for the worse when the Earth nears Jupiter, sparking a desperate mission to save humanity from extinction.

Netflix, the world’s largest subscription-based video-streaming platform, announced on Feb. 21 it had acquired the rights to stream the film in more than 190 countries and 28 languages.

Netflix content acquisition manager Jerry Zhang said “The Wandering Earth” has “high-quality production and storytelling” and that he hopes it “will be loved by sci-fi fans around the world.”

But one exceptional success story does not mean Chinese sci-fi has taken a “qualitative leap,” according to Gong Ge’er, one of the producers and writers of the hit flick.

Gong told Caixin in an interview in February that Chinese sci-fi movie production has yet to prove it can regularly churn out quality movies that can possibly challenge Hollywood.

With this in mind, what obstacles did the film overcome to win its success? Below are some of the hurdles “The Wandering Earth” had to surmount.

Sci-fi blockbusters are usually stuffed with computer-generated scenes, special effects and futuristic props — requiring equally stuffed wallets to pay for it all.

One of the biggest difficulties for the production team was that Chinese movie budgets are relatively small next to their Hollywood peers, Gong said. “The Wandering Earth” had only a special effects budget around one-tenth the size of a comparable Hollywood production, he said.

The post-production and visual effects scenes took two years to complete, and 75% of the work was done by Chinese companies, the producer said.

But almost all of the production partners involved were hemorrhaging cash throughout the project. Two of the physical visual effects studios even had to close shop, as what they came up with did not meet director Frant Gwo’s expectations and they ran out of cash.

While the technology gap in special effects is closing, the shortage of sci-fi content and talented creative in this area will pose a long-term challenge, according to the author of the original text, Liu Cixin.

According to Gong, scriptwriters working in the genre are rare in China. “Writers in this genre need to be knowledgeable both in science fiction and scriptwriting.” Gong explained.

While it takes time to nurture talent, he hopes the industry can have faith and patience, and continue to invest in the genre to keep it growing.

Where is the money?

The films rights to the novella were bought by China Film Group Corp. back in 2012, with a planned investment $50 million in the production. Eventually however, the total cost reportedly ballooned to $75 million — 50% higher than its original budget.

China Film had cold feet before starting the production, worried it may have been flushing its money down the drain. It later persuaded other parties to come onboard, sources familiar with the matter told Caixin.

In mid-2016, Gwo managed to secure another major investor — Beijing Jingxi Culture and Tourism Co. Ltd which also co-produced “Wolf Warrior 2.” Despite this, the two biggest backers still couldn’t cope with the spiraling costs brought by delays and the growing scope of the project’s visual effects.

During the post-production phase in 2018, investor Wanda Film Holding Co. Ltd. decided to pull out. In the movie’s most trying time, lead actor and “Wolf Warrior 2” star Wu Jing pledged 60 million yuan – and forsook his paycheck — to keep the project afloat.

Before the premiere, China Film predicted the box office of “The Wandering Earth” would be a bit over 2 billion yuan, versus its reported investment of around $50 million. It ended up earning over double that.

A previous version of this story misstated the amount reportedly invested in the “The Wandering Earth.” It was $50 million, not 500 million yuan.