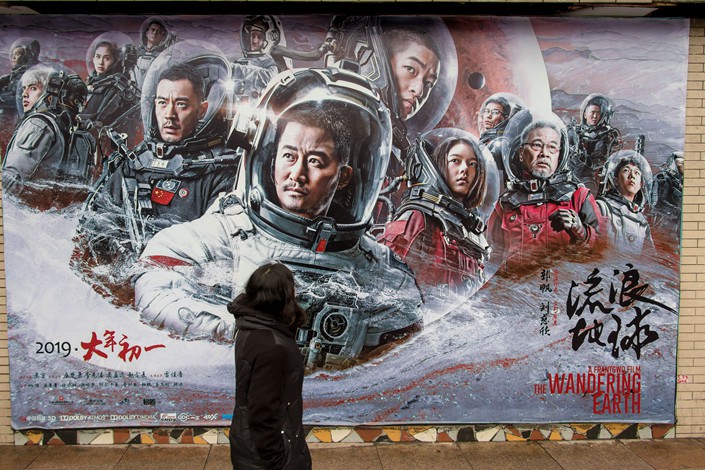 A movie poster for “The Wandering Earth” hangs outside a cinema in Shanghai on Wednesday. Photo: VCG

“It’s not realistic to think that China’s sci-fi movie industry has taken a qualitative leap just because of one success,” said Gong Geer, producer and writer of hit Chinese film “The Wandering Earth” in an interview with Caixin.

“The Wandering Earth” is an adaptation of a novella by acclaimed Chinese sci-fi author Liu Cixin set in the distant future in which the sun is close to devouring the Earth and humankind must work together to move the planet to a new solar system.

The film, released during the Lunar New Year holiday in early February, has earned over 4.35 billion yuan ($647 million) as of Sunday and become second-highest grossing film of all time at China’s box office.

The film may have the Chinese government to thank for some of its success — it received a semi-official endorsement when the state-affiliated People’s Daily shared a glowing review with the title “Only Chinese Can Save the Earth.” And on February 14, foreign ministry spokesperson Hua Chunying personally recommended the film at the ministry’s press conference.

“A lot of people have commented that ‘The Wandering Earth’ marks the first year of a new era for Chinese sci-fi movies, but I think it is more likely just a starting point for the industry’s sustainable development,” Gong told Caixin (link in Chinese).

It is too early to conclude that Chinese sci-fi has entered a new phase on the silver screen, unless the industry shows it is capable of regularly churning out quality movies in the genre, according to Gong.

It remains to be seen whether or not the industry is mature enough to accomplish this, the producer said, adding that the film has already had an impact by boosting the confidence of both investors and Chinese filmmakers.

Gong started writing the screenplay over three years ago in collaboration with the movie’s director Frant Gwo, with the goal of releasing the movie in summer 2018. However Gong said that a series of production problems including spiraling costs delayed release by seven months.

The movie’s biggest financial backer China Film Group said prior to production beginning that the budget for the film would be $50 million, however local media reports have since speculated that the total cost may have risen to closer to $75 million.

One of the biggest difficulties was affording the high cost of special effects, as Chinese movies’ budgets are relatively small compared to Hollywood blockbusters as they do not have a global audience, Gong said.

“The Wandering Earth” had a special effects budget around one-tenth the size of a comparable Hollywood production, Gong told Caixin. The film’s post-production and visual effects took two years to complete and 75% of the work was done by Chinese teams, the producer said, explaining that most of the teams were hemorrhaging cash during this period.

“It is really difficult to produce this kind of hardcore sci-fi movie in China,” Gong said. ”We have received so much recognition because the audience had low expectations for us before this film. In fact, we only just passed the test.”

While the film had only taken in $3.88 million at the North American box office as of Feb. 16, according to data from Box Office Mojo, Netflix plans to bring the movie to its global audience.

The world’s largest subscription video-streaming platform announced last Thursday it had acquired the rights to stream the film in more than 190 countries, and it will be translated into 28 languages.

“With its high-quality production and story-telling, we believe that ‘The Wandering Earth’ will be loved by sci-fi fans around the world,” said Jerry Zhang, manager of content acquisition at Netflix, in the announcement.