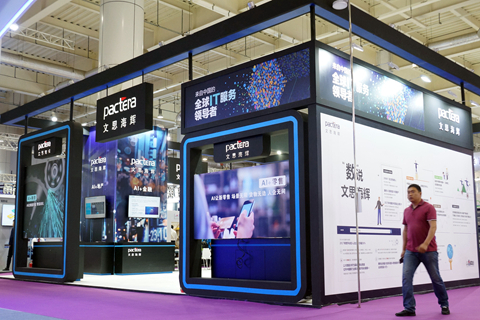 Bidders line up to buy IT outsourcing specialist Pactera from HNA. Photo: VCG

U.S. private equity firm Advent International and Chinese electronic payments giant China UnionPay are among a field of finalists in late-stage bidding for IT outsourcing firm Pactera Technology, which is being sold by the cash-strapped HNA Group, a source told Caixin.

One of China’s largest companies specializing in outsourced technology services for corporate clients, most notably financial institutions, Pactera was formerly listed in New York and was privatized by private equity giant Blackstone in 2014 in a deal that valued it at $680 million. Blackstone sold it to a then high-flying HNA two years later for about the same amount.

But following a Beijing crackdown on private companies with excessive debt, HNA has been under pressure to sell many of its assets to raise cash since the second half of 2017. The company is planning to sell most of its technology assets, including the largest, U.S. computer parts distributor Ingram Micro, a source close to HNA told Caixin, speaking on condition of anonymity.

The bidding for Pactera, meantime, has entered a second round, following an initial round in which bids ranged between $400 million and $700 million, said another source with knowledge of the sale process. Despite being China’s top supplier of information technology services to domestic financial institutions, Pactera is still losing money, even as it generates annual revenue in the $1 billion range, the source added.

Besides Advent and UnionPay, other bidders include Indian IT services company Tech Mahindra, a unit of the larger Mahindra Group; as well as Chinese IT products and services provider Digital China, the source said. HNA, Mahindra and UnionPay didn’t respond to a request for comment. Advent had no comment, and a Digital China representative reached said he was unaware of whether the company was making a bid.

“At the moment, foreign organizations are making the relatively higher bids, and also in U.S. dollars,” the source said. “For a company like HNA that’s anxious to get back capital, that’s relatively more attractive.” But he added that a foreign buyer could face greater scrutiny over national security concerns since Pactera provides services to many of China’s commercial banks, policy banks and financial exchanges.

The source said a final deal was likely to be struck in the next few weeks, and that some bidders were discussing the option of launching a joint bid.