Opinion: China is Having a Conversation About Assisted Dying 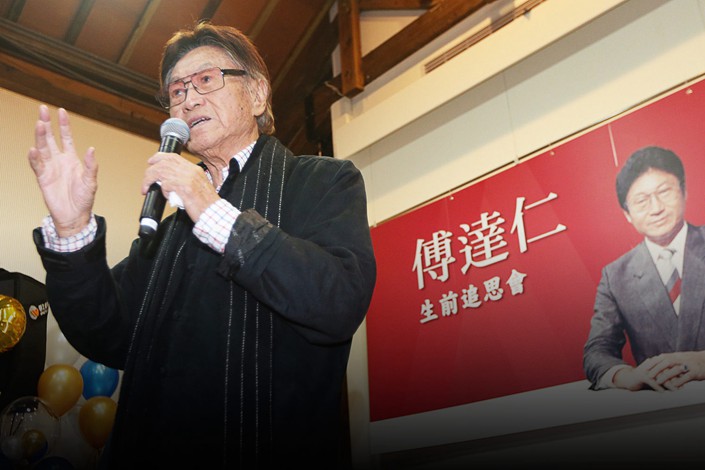 Fu Ta-jen talks about euthasia during a “living memorial service” held in his honor in Taiwan, Dec. 28, 2016. Photo: IC

(Sixth Tone) — Fu Ta-jen wore many hats over the course of his long and storied career, from basketball player and championship-winning coach to decorated television host and commentator. But perhaps his most important role was his last: euthanasia advocate.

Around 180cm tall in his prime, the Taiwan-based Fu athletic and well built — a true physical specimen. But after his pancreatic cancer diagnosis in 2016, he quickly lost weight, eventually reaching 82 kilograms (108 pounds). Given months to live, he became an active proponent of legalizing euthanasia. On June 7, at the age of 85, he underwent the procedure in Switzerland. He was the first Taiwan resident to be legally euthanized there, and his decision made waves both in Taiwan and on the Chinese mainland.

Euthanasia is illegal in China and in most of the world. But in a country where an estimated 255 million people — almost 18 percent of the population — will be at or above 60 by 2020, end-of-life care is a critical if still largely taboo topic. Just last week, Gu Jin, the chief physician at Peking University Cancer Hospital and a delegate to China’s “Two Sessions” legislative meetings, proposed implementing a nationwide “death education” curriculum for students of all ages. Online, many ran with the idea, suggesting the country “open the door” to euthanasia as well. While such a change is many years away — if it happens at all — we should start thinking about what it would mean for patients and how best to prepare for it.

The first known case of illegal euthanasia involving a doctor took place in China in 1986, in the northwestern province of Shaanxi. That year, Wang Mingcheng and his youngest sister took their mother, Xia Suwen, to a local infectious disease hospital for treatment. Xia, who was in extreme pain due to complications from cirrhosis, repeatedly cried out that she wanted to die, according to later reports.

Upon reviewing Xia’s case, her doctor, Pu Liansheng, informed her children that there was nothing he could do. Saying they could not bear to watch their mother suffer, Wang and his sister asked him to end her misery. He refused at first, but after repeated entreaties, Pu prescribed a quantity of powerful anti-anxiety and sedative medication and the dose was later doubled. Twenty hours later, Xia died.

Those involved were eventually investigated and arrested. But a few years later, a judge ruled that, while Wang Mingcheng had intentionally deprived his mother of life, “[his] act was notably minimal, the harm was not serious, and it did not constitute a crime.” The doctor, Pu, was acquitted for similar reasons.

Since then, there have been few reports of euthanasia involving doctors in Chinese media. That doesn’t mean there’s no demand for it, however. Rather, the burden appears to have fallen on family members and friends instead. In mid-2017, a man ran over his friend’s wife twice with his car. An investigation into the incident showed she had late-stage cancer and, together with her husband, had repeatedly asked for the man’s help in ending her life. Also in 2017, a woman with an autoimmune disease asked her family to help her kill herself. Her son-in-law bought her poison, and the next day she drank it while he and her daughter watched.

These cases have proven extremely difficult to adjudicate. On the one hand, the courts recognize that in most instances, the assisting party was under significant physical and mental stress. Euthanasia is a last resort and is often carried out only at the patient’s request. In light of this, further court-administered punishment can seem cruel, only extending the family’s tragedy.

On the other hand, some legal experts worry that if the sentences are too light, it will send a signal that such acts are socially or ethically acceptable. Nevertheless, in these cases Chinese judges tend to weigh extenuating circumstances more heavily than they might otherwise, absolving those involved from responsibility, even in cases where guilt is clear.

Outside the courtroom, societal attitudes toward euthanasia may be changing. In March 2017, the celebrated Taiwan-based romance novelist Chen Che, better known by her pen name, Chiung Yao, published an open letter to her children on Facebook. The now-80-year-old openly declared that, no matter what happens in the future, she did not want to be intubated, made to undergo major surgery, or sent to an intensive care unit. “To help me die without pain [would be] an act of far greater meaning than doing everything you can think of to keep me alive,” she wrote.

Chen’s letter aroused a spirited debate on the Chinese mainland, where her works are popular. Even the party-run media outlet People’s Daily weighed in, publishing a commentary that included the line, “A good death is life’s highest wish, and also its most basic right.”

But we must recognize that the legalization of euthanasia cannot be rushed. At present, almost all the countries that allow assisted dying — including the Netherlands, Belgium, Switzerland, and Canada — also possess highly developed economies and strong welfare systems.

China’s own medical system is not up to those standards. Many Chinese — scholars and members of the public alike — worry that if euthanasia is legalized in our country, patients will feel pressured to undergo the procedure for financial reasons, such as an inability to afford their medical bills.

Access to adequate palliative care is another important precursor to legalizing euthanasia. In some cases, if patients had better access to palliative treatment — and they and their families were provided with good psychological counseling and spiritual support — then perhaps they wouldn’t be so willing to opt for euthanasia.

Work must also be done to raise awareness of euthanasia among the Chinese public and explain how it would fit in with the country’s traditional family ethics, which stress filial piety and caring for one’s parents. In particular, the media and authorities should make it clear that euthanasia is a choice for some, rather than the only choice for all patients, and stress that no one should ever be pressured into undergoing the procedure. As a bioethicist interested in the ethics of euthanasia, I know just how much work — both conceptual and empirical — is still to be done on this subject in China.

None of this is to say we can’t take steps to address terminally ill patients’ concerns in the present, however. Once again, we should look to Taiwan for guidance. Although euthanasia is not legal there, a law went into effect earlier this year allowing patients who were sound of mind to prepare a legally binding document forbidding clinicians from providing “meaningless” life-saving treatment like CPR, defibrillation, or intubation in the event of an irreversible coma, permanent vegetative state, severe dementia, or similar issues.

The Chinese mainland lacks comparable legislation. The closest we have is the nonprofit Beijing Living Will Promotion Association, which was established in 2013 and encourages people to make living wills. It’s a good exercise, and the documents can help raise awareness of end-of-life issues, but they’re not legally binding.

Earlier this year, Fu Ta-jen’s family released a video of his final moments. Surrounded by his loved ones, Fu takes a drink and, after a while, falls into his son’s arms. The scene was solemn, yet warm. It’s never easy to say goodbye, but that doesn’t mean we can’t help those in need do so with dignity.

Zhang Di is a lecturer at Peking Union Medical College and holds a doctorate in bioethics.