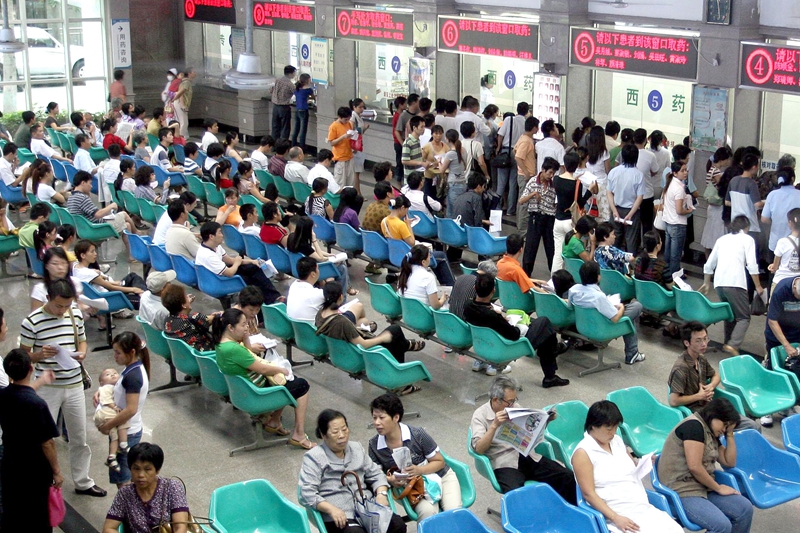 The life-support clock is ticking for hundreds of Chinese hospitals that were founded by state-owned enterprises (SOEs) as regulators press for them to become self-sustaining and independent by 2021.

There are more than 2,000 SOE-backed hospitals out of China’s total of 31,000 hospitals. Many of them may be unable to survive after 2021 unless they find new investors or funding sources. The central government is pressuring almost all SOE-affiliated hospitals to spin off from their parents as part of reforms to slim down the state sector and improve the efficiency of medical resources.

Under rules issued by the top state-owned assets regulator and the Ministry of Finance, SOEs are no longer allowed to provide any form of financial support to affiliated hospitals as of Jan. 1. And by 2021, all such hospitals must cut all ties with their parent companies.

Most of the facilities have relied mainly on funding from their state-owned parents and have been operating deep in the red. According to Wu Tongxing, deputy director of the Bureau of Enterprise Reform at the State Council, the 2,000-odd SOE-affiliated hospitals have received about 10 billion yuan ($1.5 billion) of annual subsidies from state companies.

As many state companies struggled for survival amid reforms that allow greater competition, the central government has pushed forward reforms to offload state enterprises’ social functions to help them cut costs and focus on core businesses.

In August 2017, the State-owned Assets Supervision and Administration Commission issued a policy requiring SOEs to complete the spinoff of their affiliated schools and hospitals by the end of 2018. But the goal has been repeatedly delayed because of the complexity of the reform and the vested interests involved.

The latest schedule delayed the spinoff deadline to 2021, with the first-stage goal of cutting funding ties by Jan. 1, 2019.

But there is more work to be done.

“By stopping the subsidies, SOEs have offloaded the burden,” said Jin Yongcheng, an official at the China Hospital Association. “But restructuring (the hospitals) involves complicated relations and may take 10 years or even more to complete.”

There are four options facing the hospitals, analysts said. They could transfer ownership to local government to join the public hospital system, or invite nonstate investors to transform them into commercial hospitals. Some may be integrated into state-owned health-care conglomerates, and others may face closure.

“Most SOE hospitals are in trouble and (the reform) is an opportunity for them to be reborn,” said Gu Jin, director of Shougang Hospital of Peking University. Shougang Hospital, affiliated with the state steel giant Shougang Group, is working on plans to introduce private investors.

To be or not to be

In early January, Nanyou Hospital in Zhanjiang, Guangdong province, initiated talks with private investors for restructuring. The hospital, with 400 employees and affiliated with a subsidiary of state oil major CNOOC, is seeking new investment to avoid closure.

In Shandong province, a hospital affiliated with the provincial government-backed Yankuang Group, recently agreed on a restructuring plan with a new investor, New Journey. The 60-year-old hospital has agreed to cut costs, shift business and adjust management to reach a target set by the investor to turn a profit by 2020, according to director Zhao Baomin.

Another hospital affiliated with the Yankuang Group, though, took a different approach. The Jidong Hospital has been taken over by the city government of Jining to be transformed into a public hospital. But the hospital will have to cut 50 jobs to meet the government’s requirements.

Hospitals are reluctant to make changes because of concerns over resistance from employees and worries that a restructuring involving private investors may fuel criticism on the loss of state assets, the official said.

Most SOE hospitals hope to be taken over by local governments. However, many authorities have already felt the pinch of funding existing public hospitals and thus have been cautious to take on new ones.

For smaller SOE hospitals, the most feasible option is selling the ownership to private investors seeking to crack China’s closely held hospital industry.

SOE hospitals often have stable sources of patients after decades of serving company employees and neighboring communities, which is their most valuable asset, said Song Jinsong, CEO of PKU Healthcare, one of the most active investors in the SOE hospital sector.

“It is a new wave of private investment in the hospital industry and an opportunity to bring historical and systemic changes to the (health-care market),” said Lin Yanglin, CEO of New Journey Hospital Group Ltd.

But questions remain on whether the new investors have enough patience and financial strength to overhaul financially ailing hospitals.

The deals were applauded by the market as they were expected to provide funding to capital-thirsty hospitals while extending the business chain of pharmaceutical companies. But investors’ enthusiasm has cooled recently under capital pressures, especially after last year’s stock-market rout.

Guizhou Yibai since late last year has started selling stakes in some SOE hospitals after the company was hit by the pledged-share crisis during the market turmoil. An industry source said more pharmaceutical companies are likely to sell their hospital stakes this year to ease capital pressures.

A pharmaceutical source told Caixin that his company is planning to sell its holdings in SOE hospitals as executives are disappointed by investment return.

SOE hospitals have long been a weaker part of China’s hospital system because of lower funding and less access to medical resources than public hospitals and weaker business operations than private rivals.

But for investors, the thornier issue of buying SOE hospitals is their complex, sometimes opaque, ownership, which would hinder future fundraising and plans to list, said Zhang Haipeng, senior managing director of Citic Capital.

For instance, CR Health Care, one of China’s largest hospital operators, in 2013 spent 1 billion yuan to acquire 51% of WISCO General Hospital, which was previously owned by Wuhan Iron & Steel Corp. However, a restructuring plan for a branch of the hospital was postponed to 2018 as the hospital’s assets were owned by separated entities under Wuhan Iron & Steel.

It also took years for CR Health Care to win actual control over WISCO General Hospital’s decision-making because of resistance from the hospital’s management.

How to improve the profitability of SOE hospitals is another challenge for investors. Most investors, including CR Health Care, have been building extensive hospital networks through mergers and acquisitions. The company will thus profit from selling medical devices and drugs through the hospitals.

However, such a business model contradicts the central government’s health-care reform policy, which requires hospitals to reduce reliance on drug sales to offer more-affordable treatments to the public, New Journey’s Lin said.