By Hu Yue and Leng Cheng 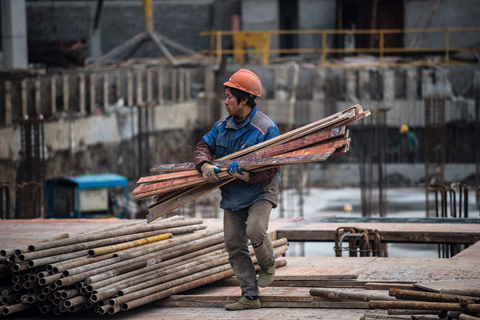 Chinese regulators should take a more nuanced approach to managing the nation’s corporate, government and consumer debt levels, some of the country’s high-profile economists and scholars said at a forum Thursday in Beijing.

“China's total debt is not a problem," said Zhou Hao, a professor and associate dean at the PBC School of Finance at Tsinghua University, at the Chief Economists Forum. “The problem lies in the structure of the debt. Leverage should not be reduced harshly, but should be structurally improved at a steady pace.”

Zhou and other experts debated the downside risks of deleveraging after China initiated a national deleveraging campaign in 2015. Authorities were concerned about a massive overhang of debt taken on by local governments, financial institutions, businesses and individuals. While the government’s campaign brought about significant changes across a broad swath of borrowing behavior, some economists attribute China’s slowing economic growth at least partly to the deleveraging campaign.

The central government last year began easing up on the campaign as the economy started to cool. This year top authorities have been pursuing fiscal stimulus policies in the form of tax cuts and inducements for local infrastructure spending as well as encouraging more lending to small and medium private enterprises.

Making corporate leverage ratios a goal for economic and monetary policies may be inappropriate because doing so could hurt the real economy, some forum participants said. Rather, policymakers should more thoroughly evaluate the use of leverage as an indicator, they said.

“It makes our monetary and fiscal policies very entangled,” Wu said. “No one can tell me what the ideal leverage ratio is, and to what extent the leverage ratio should be reduced.”

“But deleveraging is not just about monetary policy or aggregate liquidity demand,” Wu said. “It is a reflection of a profound and complicated mechanism, which includes budget control of state-owned enterprises, a mismatch in the powers of local governments between setting fiscal agenda and borrowing, and a low ratio of fundraising through equity financing.”

Huang Yiping, professor of economics at the National School of Development at Peking University, echoed that argument. There is no problem in keeping an eye on the overall increase in leverage since the 2008 economic crisis, Huang said. But he said leverage ratios should not be used as a short-term policy objective because such an indicator might not be an accurate barometer for economic health.

Quoting a study of 43 economies from 1980 to 2017, Huang said the sample countries’ average leverage overall and by economic subsector five years before a financial crisis was actually lower than the full sample for all years for all countries.

Based on the global experience, attention to debt structure should not only focus on the classification of debt as government, corporate and household, said Lu Ting, chief China economist at Japan’s securities giant Nomura. Policymakers should also pay attention to whether debt is foreign or local, as well as to foreign debt denominated in local or foreign currencies, he said. Such indicators are used to signal potential economic crises in some emerging countries.