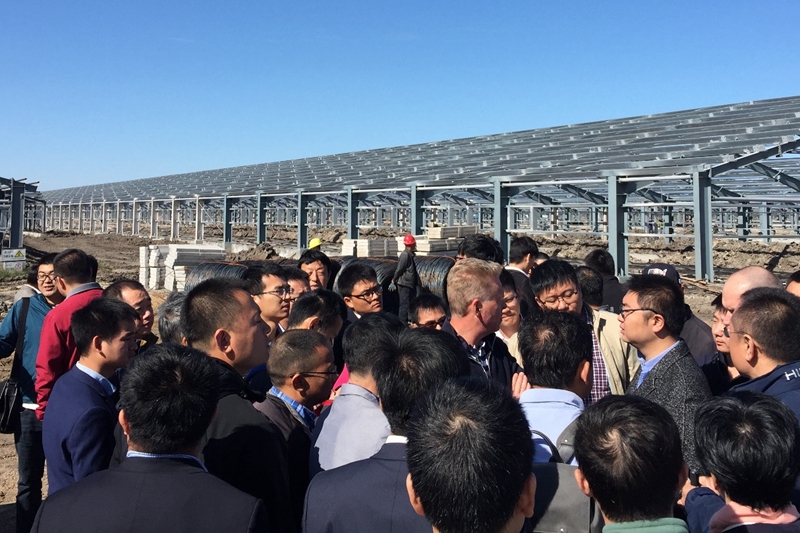 Government officials and Danish executives gathered for the opening of the Eurasian pig farm in 2017. Photo: DFD

If there’s an ideal place for raising pigs in China, Mingshui county in the northern hinterland of Heilongjiang province is it. Four and a half hours by road north of Harbin, the area offers perfect geographic and biological conditions, “just like the Midwest of the U.S.,” according to Bjarne Pedersen, a Danish farm-design expert.

This is where a Chinese-Danish partnership set out to create a showcase pig farm back in 2016. They aimed to introduce Denmark’s advanced pig-raising technology and farm management practices to China. Investors backed by the provincial governments of Heilongjiang and Zhejiang on the coast far to the east joined with Denmark’s sovereign wealth fund in the project.

Today, the dream has turned into a ghastly nightmare. China’s outbreak of African swine fever led to the annihilation of all 73,000 pigs on the partnership’s Eurasian pig farm, operated by Heilongjiang Eurasian Animal Husbandry Co. Ltd. Investors were left with losses of more than 100 million yuan ($14.9 million).

It is the biggest death toll recorded on a single pig farm in the African swine fever epidemic that hit China since last year, according to China’s Ministry of Agriculture. The disaster led to allegations that Chinese workers failed to comply with advanced protocols designed to prevent such widespread infections. It resulted in the departure of most of the partnership’s Danish experts, a lawsuit over service fee payments and the punishment of several Mingshui officials.

The Eurasian pig farm represents one battle lost in China’s protracted war against the pig epidemic since the first case was reported in Shenyang last August. In the world’s largest pork producing and consuming nation, nearly 1 million pigs have died or been slaughtered because of the disease as of mid-March, according to official data. Remote Hainan, Xinjiang and Tibet are the only regions in the mainland free of the disease.

The highly contagious virus, though not harmful to humans, is lethal for pigs. There is no cure or vaccine, so the most effective means of controlling outbreaks is to kill pigs that may have been exposed to the virus.

The en masse death of pigs raises questions of why and how the disease can spread so rapidly even at star farms like Eurasian, which are supposed to be equipped with the highest biosafety standards.

Pig deaths started to rise at the Eurasian farm in mid-November, several workers at Eurasian told Caixin. Given the scale of the farm, though, the mortality rate didn’t seem extraordinary, they said.

“At first, no one thought about the African swine fever,” one worker said.

The first case of suspected African swine fever was reported by the farm’s veterinarian to management on Dec. 17, another worker said. The farm quickly treated the herd with a vaccine for the less deadly classical swine fever before the case could be confirmed.

One week later, the disease suddenly exploded with more than 300 pig deaths in one night, on Dec. 24, according to another worker at the farm. As of Dec. 29, when Eurasian reported the infection to authorities, 3,766 pigs were dead of the disease. In early January Eurasian slaughtered the rest of the herd over several days.

A Eurasian executive said the pig farm had tightened controls on accessibility to pig houses and stepped up disinfection efforts after China’s first swine fever case was reported. But officials at the agriculture ministry in January put the blame on Eurasian for disinfection flaws that allowed the virus to spread across the farm through pig transport vehicles and workers.

Yu Kangzhen, vice minister of agriculture, at a Jan. 8 conference sharply criticized Eurasian for its operation of the pig farm and said disagreements between the farm’s Chinese and foreign managers hindered its disease-control efforts.

Several Eurasian sources argued that the pig farm’s biosafety control outperformed that of most counterparts in China but were rendered ineffective in the face of the severe epidemic.

But some Danish executives at Eurasian said the designated disinfection procedures for workers at the pig farm were not strictly followed and disagreements mounted between Chinese and Danish executives regarding the farm’s construction and equipment standards.

Paulo Inácio, a former farm manager of Eurasian who was in charge of the farm’s initial design, told Caixin that flaws in details such as minor changes in the construction of the storage for pig carcasses may have contributed to the spread of the disease.

“I’ve seen workers repeatedly violate rules or skip required procedures as they insisted on doing things based on their understanding,” Inácio said. He quit the farm in August.

“It is a real pity as it could have the opportunity to become a great project,” said Pedersen, the general manager of DFD, a Danish farm-design company hired by Eurasian to provide technological support.

With a 700 million yuan initial investment, Eurasian pig farm covers 180 hectares with facilities from pig raising to feed production and meat processing. In April 2017, Eurasian’s shareholders adopted a plan provided by DFD to build the farm with the highest biosafety standards, equivalent to those set in Europe.

Under the plan, the Eurasian pig farm would impose strict disinfection and hygiene requirements for all workers and vehicles. For example, all people and vehicles were to pass through two checkpoints and disinfection centers before entering the pig farm, and only a small group of people were to be allowed access to the pig houses, and then only after strict hygiene procedures.

However, most of the rules were not implemented, according to Inácio and several other sources.

The second checkpoint was not installed until the fall of 2018, and many rural workers in the pig houses refused to follow the hygiene rules, Inácio said. Delayed construction also posed risks to the pigs as construction workers entered the farm without following the hygiene procedures, he said.

Not until November 2018 did Eurasian have its first resident veterinarian despite years of demanding one, according to Inácio. A Chinese manager said the farm had made great efforts to hire a veterinarian but was unable to find a qualified one who was willing to work in an area as small and remote as Mingshui.

“Many production conditions written in the contract were not strictly followed,” Pedersen said. “But we had no power” to address and correct that, he said. Cultural differences and language barriers caused obstacles in communication between Chinese and foreign managers at the farm, he said.

After the outbreak of African swine fever, most of the Danish executives left Eurasian, local people said. DFD has filed a lawsuit against Heilongjiang Eurasian in Denmark for delayed payments of 170,000 euros of service fees, according to Pedersen.

Several Mingshui officials were punished by the agricultural ministry for the Eurasian crisis. The pig farm has remained closed for disinfection, Caixin learned.

Outside Mingshui, China still faces great challenges in containing the disease. A recent report by Xinhu Futures Co. estimated that the African swine fever has reduced the number of pigs in China by 30% and would expand the loss to 50%.

In 2018, China’s pig farms produced 690 million animals, official data showed. Foreign experts have widely estimated that about 20% of China’s herd has been affected by the disease, according to Pedersen.

Some experts predicted that the disease is likely to be controlled this summer but turn even worse next winter due to seasonal factors.

The African swine fever will have “significant impacts” on China’s national economy as the pork industry generates 1.6 trillion yuan of value each year and may affect related industries worth 3 trillion yuan, said Chen Huanchun, a professor at Huazhong Agricultural University in Hubei province.

A previous version of the story used the incorrect name for the disease that has affected Chinese pig farms. It is African swine fever, not flu.