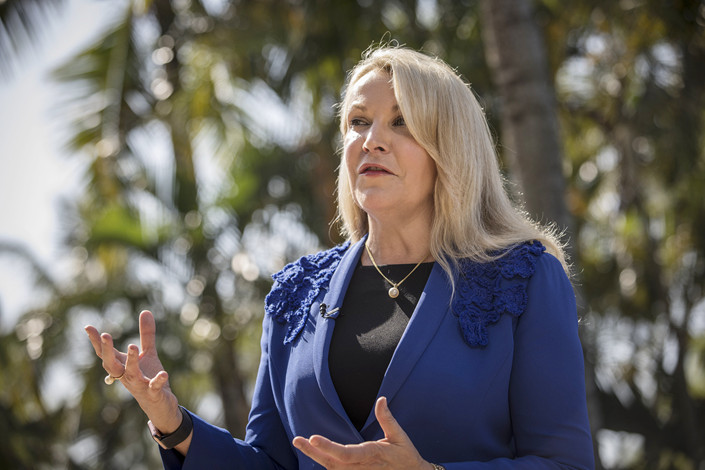 Last year FMG saw its net profit plunge 58% year-on-year to $878 million on the back of shrinking demand in China — its major market. The country’s iron ore imports dropped for a second month in November, plunging 8.8% year-on-year to 86.25 million tons. That dragged imports in the first 11 months in 2018 down by 1.3% to 977.89 million tons, according to the General Administration of Custom.

In an interview with Caixin, FMG CEO Elizabeth Gaines said despite softer Chinese demand for the elements used to make steel, the industry is set to rebound with an estimated growth of 3% to 4% in 2019. This follows Beijing’s commitment to increase investment in infrastructure to spur economic growth this year.

The following interview has been edited for length and clarity.

Caixin: Do you think China’s appetite for steel is still going to increase?

Last year we saw 928 million tons of steel production in China. That was a record — a 12% increase on the previous year, and that’s driving very strong demand for iron ore. While there's a discussion around the economy slowing it is still the second-largest economy in the world. Its one year growth rate alone is equivalent to the whole of the Australian economy. So it’s growing off a very large base.

Strong investment in infrastructure and the trillions of yuan worth of infrastructure projects will continue to drive demand for steel. It may not grow at the same rate as last year at 12%. But our view is that this year, steel production in China will grow between 3% and 4%.

Over the past two years, under pressure on environmental issues, Chinese steel mills have favored high-grade mines. FMG products are mainly lower-grade iron ore. How long do you think this trend will last? What countermeasures does FMG have planned?

I think if you went back twelve months ago, the only discussion here about the China market was that this shift in demand for high-grade ore was permanent.

I think when it comes to the environment, the industry here has made a lot of progress in the last two years in improving their equipment and improving their emission output. I think that actually means that the steel mills can refocus on their input costs. Those steel margins came under pressure towards the end of last year.

We've seen a rapid shift in that demand for lower iron ore content. The spread was the biggest gap between 65-grade iron ore and a 58-grade iron ore last July or August. But what we've seen since January is that spread has narrowed very dramatically and that's because as steel mill profits came under some pressure as they moderated, the procurement managers are saying ‘How do I lower my input costs?’

One way of lowering their input costs is to procure lower-iron content ore. But iron ore is still very high value in use. They're very good centering properties.

And let's not forget over the last two years we've sold every ton of iron ore that we’ve produced. So when the discussion was that there was only an appetite for higher iron content, we were selling every ton that we produced. It's actually been more about pricing. We stay very focused on the things we can control, and cost is one thing we can control.

As a company, we actually generated very strong margins during that period as well. But in this current environment, our view is that the industry will go through cycles and profitability is a key driver. But we have seen those spreads narrow, so certainly from our perspective it has not been a permanent or structural change to the industry.

How is the Chinese steel industry’s consolidation going to affect supply and demand in the iron ore market?

I think consolidation has been a positive for the Chinese steel industry. When it comes to some of those investments in improving emissions standards, for example. There's been a number of positives for the steel industry through consolidation through supply-side reform as well. So we see it as a positive. We are very close to China and our customers, so we stay very close to what's happening in the industry. We've got longstanding relationships with a very broad breadth of customers as well. So we see that consolidation has been a positive for the industry more broadly.

Regarding margins, the levels of profitability last year were unusually high. Unless the price of the end product increases, there will be some push back ultimately to those high margins from our perspective. There’s really been that response, that we're now back to profit levels that are probably more the long-term average.

Southeast Asia has a large population and great economic potential, and India has become a net importer of iron ore. How does FMG view the development of the Indian iron ore market and the future demand outlook? What are the development plans for FMG outside the Chinese market?

Well, we already supply outside of China. Having said that, China produces more than 50% of global steel production. So China by far is the dominant market. Last year, about 8% of our sales or shipments were outside China. And in the first half of this financial year, it was 10%.

We supply already to India, to Vietnam, to Indonesia. As I said earlier, I think we will see the broader region grow. And as those economies also develop and invest in their own steelmaking, that will drive demand for seaborne iron ore. So we're taking a long-term view that those markets will become a bigger part of the overall iron ore market. But for the time being China, certainly, and for some time yet to come, China is by far [the biggest market] at 928 million tons of annual steel production. The next closest is Japan and just over 100 million tons.

How did you cooperate with Hunan Valin Steel Co. Ltd?

Hunan Valin is a shareholder, it is the second largest shareholder. We sell iron ore to Hunan Valin, but I think importantly it's been one of the best Chinese investments outside China, both in terms of capital growth on their investment, and dividend yield. So it's been a very complementary win-win relationship. We have a board representative from Hunan Valin on our board of directors.

I think more broadly, our relationship with China extends even beyond our shareholding with Hunan Valin. We just built eight ore carriers here with Chinese shipyards. We procure products from China. We sell iron ore. In our banking arrangements, we have very strong banking relationships with Chinese banks. We had a $1.4 billion term loan we put in place last year and that includes Chinese banks.

So our perspective is that our relationship with China is multi-faceted. There's many layers to it, but Hunan Valin is certainly a very important shareholder, but also they are an important customer.

What about your relationship with China Baowu Steel Group Corp. Ltd., the nation’s biggest steel company?

We've had a longstanding relationship with Baowu — that might have been referring to Iron Bridge. The Iron Bridge project is a magnetite project in the Pilbara (in the north of Western Australia). It's a project we've been working on for some time. We haven't made a decision yet whether to go ahead, but our joint venture partners are Formosa (Plastics), a Taiwanese group and Baowu, our joint-venture partner. But we haven't yet made a decision as to whether the project will be proceeding.

Does FMG have plans to go into the derivatives market, such as Singapore’s swap market or Dalian Commodity Exchange’s iron ore futures?

We've been monitoring the market for some time, there’s still quite a lot of volatility. And it's still, I think — for steel mills in China and for producers of iron ore like ourselves, you want to have very transparent pricing. Where you see lots of volatility and trading on a derivatives market, I think there's still a way to go yet before that'll be a major part of any sort of the derivatives. The volume started off low, in the last year the volatility was slightly lower, but you’ve got significant volatility because people are trading on that more in a speculative way as opposed to having much more transparent price discussions between steel mills and iron ore producers.