Update: Growth in China’s Investment Picks Up Thanks to Infrastructure, Property Spending 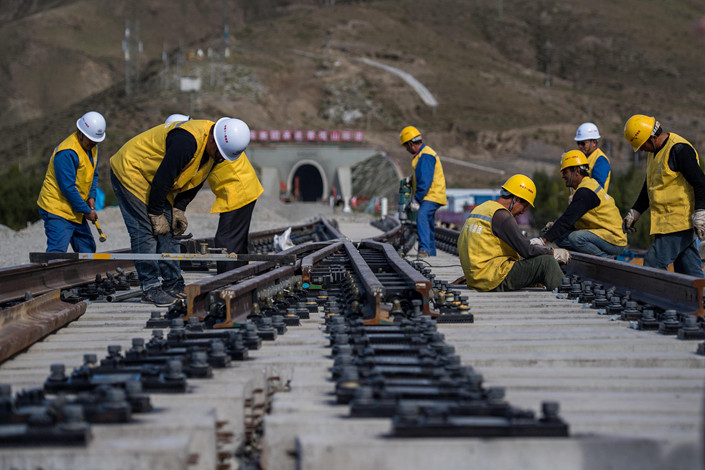 The Sichuan-Tibet Railway under construction on Sept 16, 2018. Photo: VCG

* China’s fixed-asset investment, excluding rural households, grew 6.1% year-on-year in the first two months of 2019, edging up from a 5.9% rise in the whole year of 2018, official data showed

* Government-driven infrastructure investment rose 4.3% year-on-year in the first two months, up from a 3.8% growth rate for 2018, though some had expected stronger growth as the central government called for more spending to prop up economic expansion

(Beijing) — Faster spending in infrastructure and real estate may have bolstered investment at the start of this year, but overall economic conditions in China remain unpromising, economists say.

Excluding investment by rural households, China’s fixed-asset investment (FAI) — a key driver of domestic demand that includes infrastructure — grew 6.1% year-on-year in the first two months of 2019, edging up from a 5.9% rise in the whole year of 2018, according to data (link in Chinese) released by the National Bureau of Statistics (NBS) on Thursday. The reading met the median forecast from a Bloomberg News survey of economists.

Government-driven infrastructure investment rose 4.3% year-on-year in the first two months, up from a 3.8% growth rate for 2018. Both expansions in spending on roads and railways accelerated to double-digit rates during the period.

Some economists had expected a stronger recovery in growth in infrastructure investment, as Beijing has called for more government spending to support sluggish economic growth. Since last year, growth in infrastructure investment has been basically trending down, despite the occasional pick-up, due to policy tightening on local government borrowing.

“Infrastructure investment disappointed in the first two months, suggesting that government efforts to accelerate it have not yet yielded material impact,” Louis Kuijs, head of Asia economics at research firm Oxford Economics in Hong Kong, wrote in a research note.

Growth in infrastructure investment is below expectation, but “the uptrend is well in place and likely to continue on the back of special local government bond issuance and approval for FAI projects in the coming months,” Betty Wang, senior economist with Australia and New Zealand Banking Group, said in a note.

Investment in real estate development rose 11.6% year-on-year in the first two months of the year, up from a 9.5% increase for 2018, NBS data show (link in Chinese). The reading was the strongest since the first 11 months of 2014.

Beijing is likely to ramp up supportive policies in the coming months, and deregulating the property markets in big cities is the key to unlocking a recovery in growth, economists with investment bank Nomura International (Hong Kong) Ltd. said in a note.

Value-added industrial output, which measures production at factories, mines and utilities, grew 5.3% year-on-year in the January-February period, down from a monthly rate of 5.7% in December. The growth was the slowest since the first two months of 2002. The indicator would have grown 6.1% without the dragging effects of the Lunar New Year holiday, NBS spokesman Mao Shengyong said.

Year-on-year growth in retail sales, which include spending by governments, business and households, remained unchanged from December at 8.2%.

“At best, the latest data will ease concerns over a sharp slowdown at the start of the year. But the near-term outlook still looks downbeat,” Evans-Pritchard said.