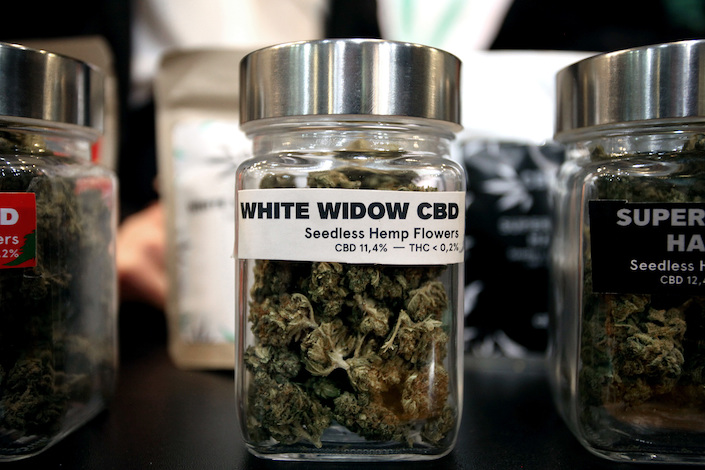 More than 20 cannabis-related stocks fell by the 10% daily limit Thursday after a rally since the start of this year boosted stocks that are even remotely linked to the plant, which is still mostly illegal in China.

Even though growth and consumption of marijuana, the most common product of the cannabis plant, is illegal in China, it is legal to grow industrial hemp, also part of the cannabis family with less than 0.3% tetrahydrocannabinol, the active ingredient in marijuana. Marijuana, cannabis and hemp are all called “da ma” in Chinese, so the three are often confused.

The China National Narcotic Control Commission issued an official notice earlier this month requiring anti-drug authorities to tighten approval of permits for industrial hemp growth. At present, industrial hemp can only be used in fabric and seeds and has never been approved for medical and food use, the regulator said.

Jilin Zixin is a producer of traditional Chinese herbal drugs based in northeastern Jilin province, which is expected to legalize cultivation of industrial cannabis. The company in January announced a cooperation plan with the Jilin Academy of Agriculture Science to develop technology related to industrial hemp.

Jilin Zixin and Shunho plunged more than 6% Thursday. Shares of Jilin Zixin and several other cannabis-related companies have more than doubled this year and Shunho’s shares have nearly quadrupled. Before Thursday’s drop, the stock soared by the 10% daily limit for four consecutive sessions.

Industry insiders said the development prospects for industrial cannabis in China are still unclear, attributing the recent surge of cannabis-related stocks to speculation.

According to East Money Information Co., which tracks stock trading data, a trading room of brokerage house Tibet Orient Fortune Securities Co. in Lhasa, capital of the southwestern Tibet Autonomous Region, bought 204 million yuan ($30.3 billion) of Shunho shares from Feb. 1 to Wednesday and sold 179 million yuan of the stock during the same time.

Large amounts of buying and selling of a stock at the same time indicates market manipulation, in which some investors trade the same stock frequently via multiple accounts to attract other investors to follow, the investment head of a private equity fund told Caixin. This trading style looks like hot-money traders from Zhejiang area, this person said.

Another trading room of brokerage house China Galaxy Securities was also found to have engaged in a large volume of buying and selling of Jilin Zixin’s shares recently. The trading room is commonly believed to be used by Zhao Qiang, known as “Big Brother Zhao” among hot-money traders. Zhao couldn’t be reached to confirm whether some of the transactions were related to him.

Funds started to flow into China’s cannabis sector earlier this year after Canada’s legalization of recreational marijuana and local media reports that northeastern Jilin province is expected to be the third province to allow legal cultivation of industrial hemp in China, after southwestern Yunnan province and northeastern Heilongjiang province.