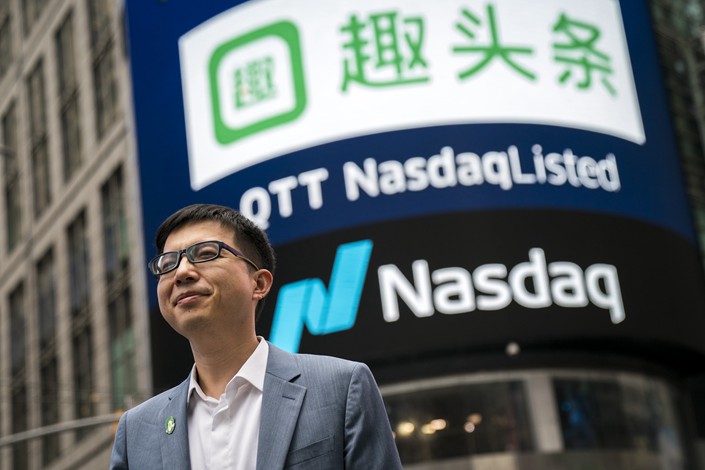 Qutoutiao said Alibaba will have the option to convert the loan into Qutoutiao’s Class A shares at a rate equivalent to $15 per American depositary share (ADS) in three years. The conversion price marks a 31% premium to Qutoutiao’s latest closing price of $11.45 per ADS in New York.

The investment marks Qutoutiao latest fund-raising to further expand its fast-growing but massively money-losing business as it fights for its share of a hotly contested market. Last September the company sold 12 million ADSs to raise about $84 million in a floatation on the Nasdaq, sharply lower than the $300 million it had originally targeted, amid cool investor sentiment.

If Alibaba converts the entire loan to shares, it would receive 4% of the news aggregator’s stock. Alibaba’s chief rival, social media giant Tencent, holds 7.7% of Qutoutiao.

The loan has a 3% annual interest rate, but that money will be waived if Alibaba converts the loan into shares.

Qutoutiao’s stock is now up 63.6% from its IPO price, giving the company a market value of $3.26 billion.

The company has become China’s third largest news platform trailing only ByteDance’s Jinri Toutiao and Tencent News, according to the company’s website. ByteDance is the world’s most valuable “unicorn,” defined as a startup worth more than $1 billion, after receiving a $75 billion valuation following a fund-raising last year.

Qutoutiao’s rapid rise has been partly driven by its popular “gamified user loyalty program,” where readers can earn points for every article they read or every new user they recruit to join the platform. The points can be redeemed for monetary rewards.

However, the expansion has come at a cost. In 2018, the company reported a net loss of 2 billion yuan ($300 million), sharply widening from 100.8 million yuan the year before, according to its first annual report after going public.