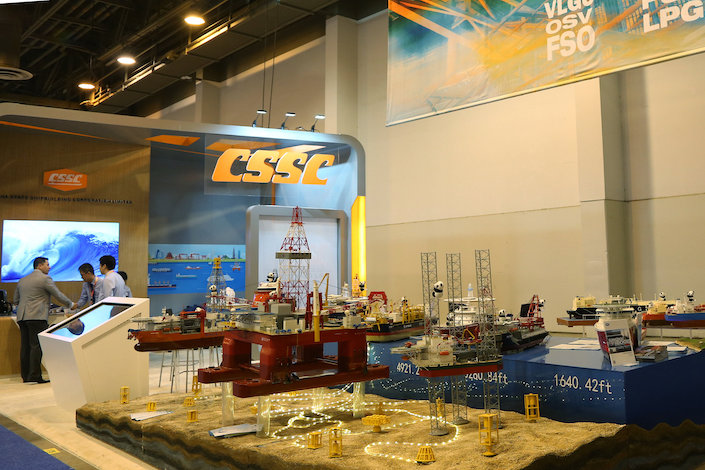 Analysts say the restructuring shows a major shift in CSSC’s asset integration from a geographic approach to a sector-driven strategy. Photo: VCG

One of China’s two state-owned shipbuilding conglomerates disclosed plans Thursday to restructure and swap certain assets of its two listed subsidiaries as part of the nation’s efforts to push forward market-based restructuring at state-owned enterprises.

Additionally, CSSC Holdings will take over Jiangnan Shipbuilding from the parent company. The Shanghai-based shipyard is building China’s third aircraft carrier for the military and produces the world’s largest container ships.

The Guangzhou unit will also take over the marine propulsion assets from three other units of the parent group: CSSC Marine Power, CSSC Propulsion Research Institute and CSSC-MES Diesel.

After the swaps and restructuring, CSSC Holdings will control five shipyards, becoming CSSC’s listed platform for shipbuilding, while the Guangzhou unit will get out of the shipbuilding business and focus on marine propulsion.

A military-industry analyst told Caixin that the restructuring shows a major shift in CSSC’s asset integration from a geographic approach to a sector-driven strategy, following a similar move by China’s other shipbuilding titan, China Shipbuilding Industry Corp. (CSIC).

CSIC and CSSC were one conglomerate until 1999 when they were split in two with the Yangtze River as a divider. CSSC mainly handles shipbuilding activities in China’s south and east and is often dubbed the “southern shipbuilder,” while the Beijing-based “northern shipbuilder” CSIC operates shipyards in the north and west.

In addition to the shipbuilding and marine propulsion businesses, the southern shipbuilder also has a listed subsidiary, CSSC Science & Technology Co., which makes steel structures and mechanical engineering products.

There has always been speculation of a reunion of the two shipbuilding giants amid a broad shakeup of China’s state-owned enterprises. Talk of a possible merger resurfaced last year when some senior executives of the two conglomerates swapped positions. CSIC Chairman Hu Wenming was the former chairman of CSSC.

Both CSIC and CSSC denied rumors of a merger last year. But top executives from the two groups met earlier this month, discussing how to further strengthen communication and cooperation.

The meeting followed China’s annual session of the National People’s Congress, during which Xiao Yaqing, director of the State-owned Asset Supervision and Administration Commission (SASAC), reaffirmed the government’s plan to push forward further consolidation in many sectors including shipbuilding.