By Jia Tianqiong and Ke Dawei 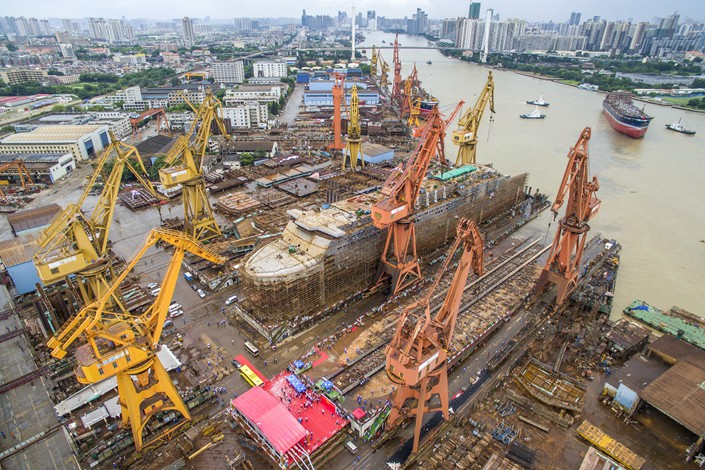 One of China’s two shipbuilding titans will swallow a money-losing ship repair and conversion business as part of the government’s plans to scrape barnacles from the hull of the oversized and inefficient industry and get it shipshape.

CSSC mainly handles shipbuilding activities in China’s south and east, with subsidiary GSI largely handling construction of very large and super large-class oil and ore carriers from a base in the southern city of Guangzhou. GSI is located in the same dock area as Guangzhou Wenchong, which specializes in ship modification and repairs. The tie-up will allow both to cut costs and boost efficiency by sharing transport and docking facilities, the filing said.

Guangzhou Wenchong recorded a net loss of $22.2 million last year. But CSSC believes the streamlining of facilities should help it to improve its operations, the filing said. CSSC itself turned a net profit of $360.7 million in 2017.

Beijing is looking to consolidate China’s shipbuilding industry as part of a broader nationwide effort to develop internationally-competitive state-owned champions in the country’s many fragmented industries. The country’s economic blueprint, the 13th Five Year Plan, calls for 70% of new tonnage to be in the hands of the top 10 largest companies by 2020.

Rumors emerged in March of a megamerger of CSSC and fellow giant China Shipbuilding Industry Corp., which would create a company with combined annual revenue of around $73.3 billion, more than double the combined revenue of the world’s next three biggest shipbuilders, according to Bloomberg.

The world’s biggest shipbuilding market is facing growing pressure due to rising labor costs and overcapacity. Skilled workers increasingly seek better opportunities elsewhere, industry insiders say. “At the beginning of Chinese New Year and other holidays, shipyards worry that skilled workers will not come back to start work, and their technical skills will be lost,” the deputy manager of a state-owned shipyard said at an industry event last month.

Low wages and a large pool of talent have helped Chinese shipbuilders to chip away at the market share of more advanced rivals from Japan and South Korea. But that advantage is slowly being lost. Chinese shipbuilding’s efficiency is one-third that of these countries, said Xie Ziming, an engineer with CSSC. Just 20% of the construction process is automated at many Chinese firms, whereas it stands at around 68% for Japanese and Korean rivals, he added. Production quality also tends to be lower, with errors occurring 10 times more often at Chinese shipbuilders than their East Asian peers.

Along with shoring up its national champions, China has opened its shipbuilding industry to encourage greater innovation. Under a rule change announced at the end of June, the Ministry of Commerce said foreigners will be able to set up fully-owned shipbuilding enterprises in the country, removing a previous 49% ownership cap.