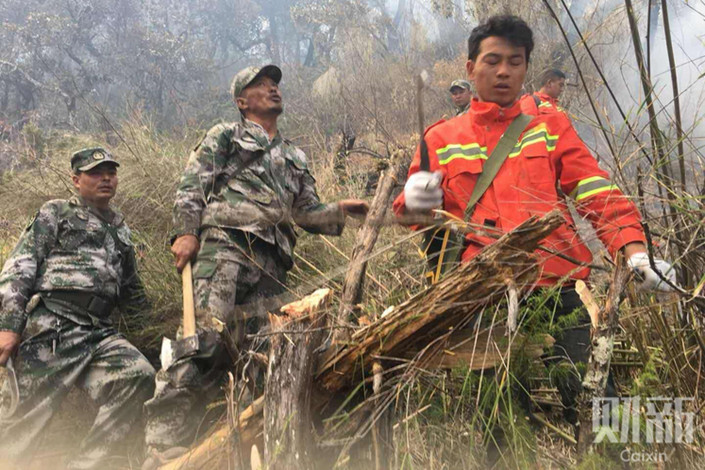 The deaths of 30 firefighters in a forest fire in southern Sichuan province this week has restarted a debate over China’s firefighting methods and preparation.

The bodies of 27 forest firefighters and three local fire department officials were found on Monday after they were sent to contain a blaze at an altitude of 4,000 meters (13,100 feet) on Sunday. According to officials, they were killed by a fireball caused by a sudden change in wind direction.

Of the 27 forest fire personnel, only one was over the age of 30, according to the public list of the names of the deceased. The fire was China’s deadliest since 2015, when an explosion in Tianjin started a chemical fire that killed 173 people, including at least 21 firefighters.

This week’s tragedy has renewed a debate about forest fires and how to fight them. State-owned media outlets have called for China to improve its firefighting system.

Liu Futang, an environmental activist who used to be in charge of fire prevention in Hainan province, released a statement calling for China’s firefighting system to emphasize the safety of firefighters above all else. “I have always called for the safety of people to be the first priority in fighting forest fires,” he wrote. “Trees can burn for a long time, but people can’t recover.”

Liu Naian, vice director of the State Key Laboratory of Fire Science at China’s University of Science and Technology, said an early warning system must be implemented because fires are more likely to occur in specific weather, terrain, and combustibility conditions. For example, in canyon areas with steep slopes, firefighters should be aware that a fire may occur at any time. “In a canyon terrain, fires most often break out at the bottom of the canyon. Firefighters should know not to stay at the bottom of the canyon for extended periods,” he said.

Reports have said that the 30 firefighters were killed while on their way to the fire. Fire prevention specialist at the Guangdong Academy of Forestry Wu Zepeng wondered whether the firefighters should have been in the area in the first place. On complex terrain at such a high altitude, the wind direction is likely to change at any time, causing huge risks to the firefighters. “Under such circumstances, if there are no facilities around and the fire does not pose a threat to residents, it is not advocated that the fire should be directly put out or put under control immediately,” he said. “During the California wildfires in 2018, the fires were not completely extinguished immediately. First the fires were controlled, then the residents were evacuated.”

Liu Futang, who worked in the Hainan Fire Prevention Department for 17 years, told Caixin that the complexity of the region would not have allowed for any direct rescue. He noted that the wind at 4,000 meters above sea level is uncertain and even small changes in the weather can have a big effect. “We ought to wait for an opportunity and find a refuge site in advance before going to fight the fire,” he said. “When the fire is far away, firefighters should consider where the refuge point is if the wind changes.”

The experts agreed that this type of fire in Sichuan is rare. However, Liu Futang maintains that human casualties in firefighting can be avoided, and joined others in calling for greater research into the causes of and ways of managing such wildfires.

“The fire caused heavy casualties among the firefighters, and the reason cannot be attributed to the lack of experience of local firefighters, because such extreme fires are relatively rare,” Liu Naian said.