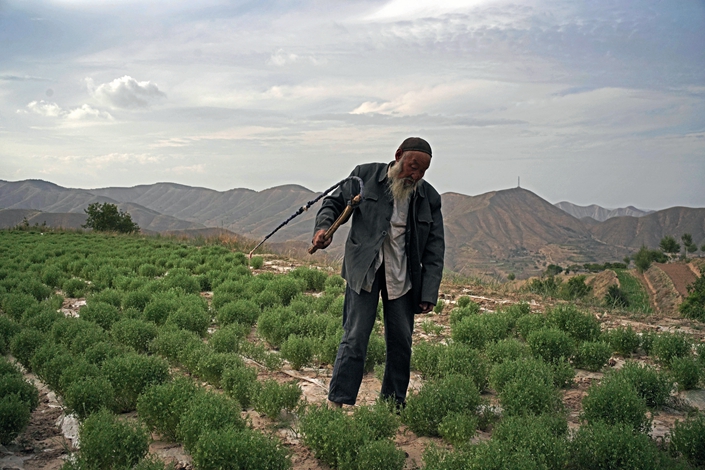 In the mountains surrounding the city of Dingxi in Northwest China’s Gansu province, entire communities have lost their youngest residents.

Left behind in the province, one of China’s poorest, are the oldest people who continue to eke out meager existences in a bleak landscape.

In Bailiu village near Dingxi, there are fewer than 4,000 people — nearly none under the age of 35.

Zhang Wenqing, who looks out of place in the 21st century with his full white beard and old-fashioned cap, says he’ll be 80 by the 12th month of this lunar year.

Zhang and his wife, 63-year-old Cai Jiaoying, live in a house he built in 1985. The roof tiles were brought in on a donkey from Huining county, 20 kilometers (12.4 miles) away, Zhang said. It took a fortnight to transport all the tiles to Bailiu. When it was completed, it was the best-looking house in the village. “When he was young, he could walk (into town in) Dingxi and back within a day,” Cai said. “At the time, there was nothing to eat or drink, so he went around peddling goods.”

These days, Zhang doesn’t venture far from home, not even to watch performances in the village. “It’s hard to stand and watch, and it’s also hard to sit. It’s not convenient, so I don’t go,” he said. The couple lives off government handouts, which a local official said was a “subsistence allowance” of 292 yuan ($43.48) per person each month, in addition to an annual payment of 7,008 yuan for a married couple.

The couple is among the many elderly Chinese people left behind in rural communities across the country as younger people have flocked to cities for better jobs and opportunities. They’re the older counterparts of left-behind children, who are often left to fend for themselves or with aging grandparents by migrant parents who can’t afford to bring them to the cities where they live.

Zhang Wenqing’s 77-year-old younger brother, Zhang Wende, remains more active. He works as the custodian of a temple at nearby Yenian village. The temple has been his home for the past 27 years, and Zhang Wende lives off donations from villagers.

There was a big three-day ceremony at the temple in June, and the place was filled with fluttering flags and unusually busy, Zhang Wende said. But, recently, there’s been nothing to do except check on the incense and dust the furniture.

Zhang Wende never married and has no children. But others in the mountains have found that children aren’t the insurance against loneliness in old age for which that they had hoped.

In Shixiawan village, Zhou Kejian is known as the man who tried to throw himself off a hillside.

Zhou’s five children all left the village years ago to work in the Inner Mongolia autonomous region. He says he tried to join them, but wasn’t able to get used to living there. When he returned to Shixiawan, Zhou said, he tried to get village officials to summon his children back to the village. But the children refused to return, and the officials were powerless to do anything. So, Zhou decided to let himself fall off a hillside terrace. He survived.

Zhou and his wife Peng Yumei are both 84 this year, but she looks far older. Women in their village shoulder most of the housework — cooking, washing clothes, feeding pigs — which the men consider beneath them. Peng did not speak much, letting Zhou do most of the talking.

Zhou said he resents local officials for allowing his children to cancel their household registration, or hukou, in the village. “They cancelled the hukou with a knife and an ax. It’s a matter of murder,” he said.

The village’s party branch secretary told Caixin that Zhou favored his fourth child, a son, and had long planned to leave all his possessions to this son, with the expectation that the son would take care of Zhou and his wife in their old age. Zhou’s hukou was originally tied to his fourth child’s, but two years ago, he found out that his son had quietly shifted his registration from Dingxi to Inner Mongolia.

Without anyone to take care of him and no state welfare payments, Zhou blames his situation on the officials. But, according to the local government, Zhang wasn’t eligible for welfare payments because none of his five children were registered as “impoverished.” Zhang’s favorite son is currently growing sunflowers in Inner Mongolia for processing into oil, and has no desire to inherit his father’s house and land, which are worth only 1,000 yuan in total.

Two of Zhang’s three daughters had actually agreed to return home to care for their parents, if they could be included in his will. But Zhang refused. “Everything down to the last chopstick belongs to the fourth child. Girls should not interfere,” he said.