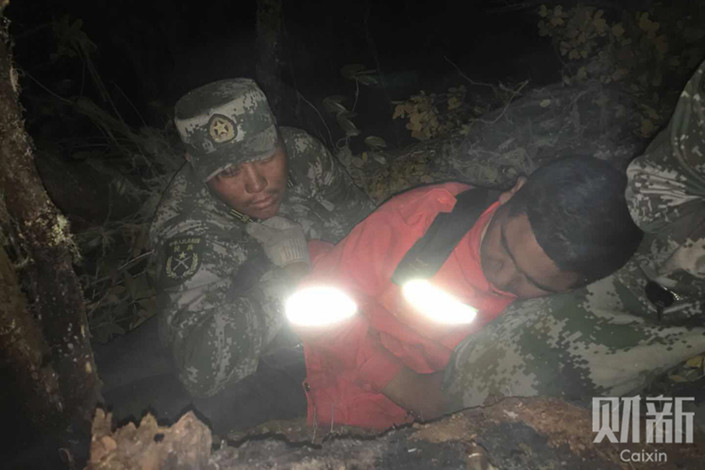 Firefighters who survived the fire rest in a cave on April 1. Photo: Ying Wujin/Caixin

Fires are commonplace in forests near Yalongjiang town in Sichuan province, where the weather is dry and windy year round.

But the blaze that killed 30 firefighters this week was unlike anything locals had seen before, survivors say.

Lightning had struck the forest on Saturday afternoon, multiple residents of Lini village, a part of the greater Yalongjiang town area, told Caixin.

Dong Jianzhong, the Communist Party secretary of Yalongjiang town, said the town had received reports of a fire from locals soon after the lightning strike. People living in the villages scattered across the area’s mountainous terrain are obliged by local regulations to report fires, Dong said.

The town then sent personnel to the area where the fire was reported, and saw multiple small fires. After some effort to put the flames out failed, the town decided to escalate its response and alert the county government, which oversees the town.

The county dispatched a group of firefighters to the scene on Sunday — a move that would later prove deadly.

It was a complicated operation from the start.

Villagers had to lead the first few firefighters to the site of the fire to investigate, before helicopters could be called in, Cao Jianhua, the head of Lini village and one of the people who had gone to put out the fire, said. “Otherwise, the mountain is too big, and the helicopter pilots don’t dare to enter,” he said.

When Cao and the rest of the firefighters reached the site of the fire, it was still small. They scattered to fight the fire, with each person responsible for one area. Some time later, a group of seven people including Cao and villager Ren Zhengduji gathered at a spot some distance from the edge of the fire to rest.

Suddenly, at around 5pm, the wind direction changed. “We heard the sound of fire igniting, and there was less than five minutes between the wind picking up and the fire spreading,” Ren told Caixin.

Cao said the firefighters were at the bottom of a valley at the time when the wind suddenly began blowing in their direction. Behind them, a red flame suddenly arced seven or eight meters (23 to 26 feet) upward, before rapidly consuming the nearby pines and bamboo and spreading to another hill within minutes.

The seven of them began to run toward higher ground, where there were no flammable branches.

“Even though I walk these mountains frequently, and I’m a fast runner, the fire was constantly at my heels, and it burnt my clothes and hair,” Cao said. He said the group ran for twenty minutes before finding a cave, which they decided to hide in.

Cao grew up in the mountains. “I’ve seen similar fires, but never encountered wind like this,” he said.

“There was fire everywhere outside the cave, and every now and then the flames would reach inside,” said Ying Wujin, another of the survivors. After a while, the fire subsided and they ventured out to pick up some branches for warmth. That was how they “endured the night,” Ying said.

By Monday, 30 firefighters who weren’t able to find refuge from the fire had died in the flames, including one who was only a teenager. Yang Dawa, the director of the county forestry bureau, was also among the dead, Cao said.

“I’m so scared that I can’t think about it,” Ren said. “The more I think about that day, the more scared I become — we were nearly killed too.”