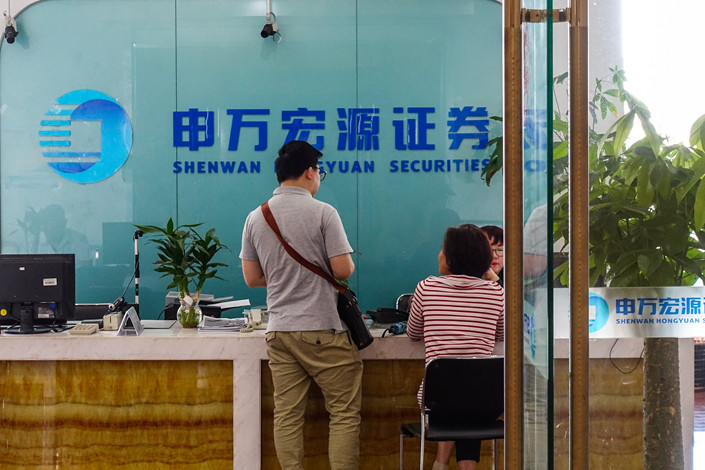 A Shenwan Honguyan branch in Shanghai on May 4, 2018. Photo: VCG

Brokerage Shenwan Hongyuan Group Co. Ltd. is aiming to raise up to HK$9.84 billion ($1.25 billion) through a Hong Kong listing, seizing on positive sentiment that has made China one of the world’s best-performing stocks markets this year.

The fundraising target was contained in the company’s latest filing to the Hong Kong stock exchange on Wednesday, following the original disclosure of its listing plan in January. The company, which is already listed in Shenzhen, is aiming to sell about 2.5 billion shares with a price range of HK$3.63 to HK$3.93, according to documents seen by Caixin. The float represents 10% of the company’s enlarged share capital, and could become the largest new listing in Hong Kong so far this year.

Chinese brokerages are highly dependent on trading volume for much of their income that comes from transaction fees, though they have tried to diversify in recent years through other offerings like wealth management products and investment banking services. The group typically fares poorly when China’s stock markets do poorly due to lower trading volumes.

The company is China’s seventh-biggest brokerage by profit and fifth-largest by revenue, according to nationally compiled statistics. Its 2018 revenue rose 15.2% year-on-year to 24.1 billion yuan, while its profit attributable to shareholders fell 9.6% to 4.2 billion. It blamed rising costs for its core trading business and higher bond interest rates for the profit decline.

The big majority of the listing will be sold to 13 cornerstone investors that have committed to buying around $830 million worth of the stock, or nearly 70% of the offering if it prices in the middle of its range. The largest of those, an asset-management unit of leading state-owned bank ICBC, has agreed to buy $300 million worth of stock. Hua Insurance and China Life Insurance have agreed to buy $100 million and $80 million, respectively.

The company will launch its investor road show on Friday, with final pricing of the shares set for April 18 and a trading debut on April 26. Underwriters of the deal include Goldman Sachs, and international units of ICBC and Agricultural Bank of China.