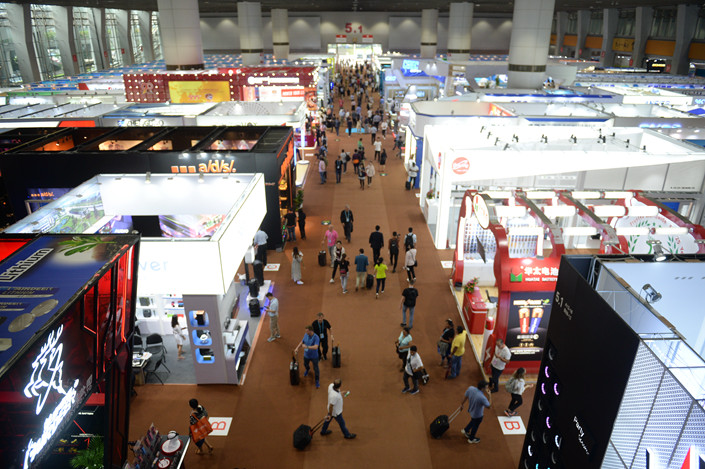 China’s decades-old export and import fair apparently has struggled to attract buyers to its spring session, boding ill for the country’s exports, a senior official involved in organizing the event said.

The China Import and Export Fair, or Canton Fair, which has been held twice a year since 1957 in the southern city of Guangzhou, is seen as a barometer for the vitality of China’s international goods trade.

A few leading indicators related to buyers visiting the 125th fair, which opened on Monday and will run across three five-day sessions until May 5, suggest that the situation this year is “grave,” Xu Bing, the event’s spokesperson, said at a press conference on Sunday. The indicators include the number of applications to the fair made by exhibitors for invitation letters for their overseas customers, the number of preliminary event passes issued, and the number of local hotel rooms and airline tickets booked.

Xu, who is also a deputy director general of the Ministry of Commerce-affiliated China Foreign Trade Centre, the institution that organizes the fair, skipped the traditional practice of revealing the number of buyers who are expected to attend the event. Just under 190,000 purchasers visited during last year’s autumn session, down 1.1% from a year earlier, its official figures (link in Chinese) showed.

Cooling interest in the Canton Fair may cast a shadow on the outlook of China’s exports in the second half of the year.

“China’s foreign trade still faces a rather grave and complicated environment. It remains a daunting task to stabilize foreign trade,” Xu told reporters. He added that downward pressure on the Chinese economy is growing, with exporters and importers grappling with multiple difficulties including in accessing financing and the rising costs of labor and land.

China’s overseas shipments in dollar terms surged at a stronger-than-expected rate of 14.2% last month, after slumping 20.8% in February, official data showed Friday, partly due to distortions caused by the Lunar New Year holiday.

In the first three months of the year, exports edged up only 1.4% year-on-year, down from an increase of 3.9% in the October-December period, “indicating a continued weakening of export growth,” according to calculations made by Nomura analysts based on official data. Investment bank China International Capital Corp. Ltd. blamed the deceleration on a 9% decline in exports to the U.S. due to bilateral trade tensions.

The robust export jump in March “is unlikely to sustain due to sluggish external demand, the downswing in the global tech sector and recent RMB appreciation,” Nomura economists said in a note on Monday.

China’s imports fell 4.8% in the first quarter, compared with a jump of 4.4% in the previous quarter, they wrote.

The World Trade Organization’s latest World Trade Outlook Indicator fell to 96.3 for the first quarter, the weakest reading since March 2010 and below the baseline value of 100 for the index, which signaled below-trend global trade expansion at the start of the year, according to the international body’s report in February.