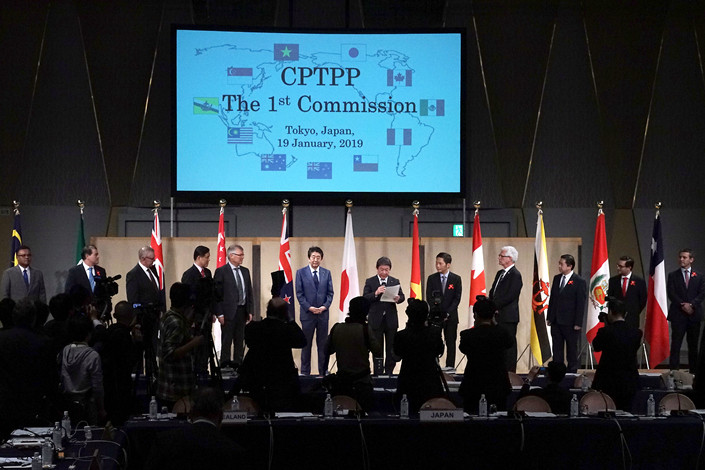 A ministerial meeting of the CPTPP member nations was held on Jan. 19 in Tokyo. Photo: IC

If China joined a massive Pacific trade deal, it could create hundreds of billions of dollars in extra income and spur domestic reforms, say analysts, but signing up would be far easier said than done.

After President Donald Trump brought the U.S. out of the “potential disaster for our country,” as he dubbed it, citing potential job losses, the remaining countries suspended the clauses that only the U.S. had really wanted, and added a few words to the deal’s title.

Should China step into the vacuum the U.S. has left and join CPTPP? Experts argue that the benefits for both China and other countries could be significant — but hitting the deal’s stringent requirements would be tough.

CPTPP’s members account for over 13% of global gross domestic product (GDP). The departure of the U.S. has helped make it a slightly more inclusive agreement — 22 clauses were dropped, mainly ones on greater protections for intellectual property (IP) — but also a much less significant one. On its own, the U.S. accounts for about a quarter of global GDP.

If CPTPP wants to be truly influential, then it needs one or two significant new members, said Jayant Menon, an economist at the Asia Development Bank. South Korea, Indonesia and the U.K. have all expressed interest in joining. China, so far, has not — but there are two big reasons why it might do so.

If China became the 12th member of the CPTPP, it could lead to $298 billion in additional income gains in the country by 2030, according to a recent report by the Peterson Institute for International Economics (PIIE), a U.S.-based think tank.

Global income gains from the deal would quadruple by this date if China joined, and the total value of trade between China and other CPTPP members would also increase by over 50%, the report said. And if China doesn’t join, CPTPP could divert trade and investment away from the country, Michael Plummer, one of the authors of the PIIE report, told Caixin.

But China cannot simply walk into the CPTPP. “It is not an easy agreement to join”, said Ashok Mirpuri, Singapore’s ambassador to the U.S., at a panel in January. “People are putting up their hands, and we’re quite ready to start accepting them — but without lowering any standards.”

CPTPP’s requirements on a swathe of issues, including support for state-owned enterprises (SOEs), workers’ rights, e-commerce, IP rights, investment rules and market access, could all pose significant challenges for China. The deal requires, for instance, that all member countries do not provide unfair support to their SOEs, unless they provide public services. China’s help for its vast state-owned sector has been a key point of contention with its trade partners. Issues like this, as well as the country’s weak IP protections and alleged cyber theft, are at the heart of the U.S.-China trade war.

“I continue to believe that there’s a long way to go before China would ever be able to live up to the high standards of the CPTPP,” said Michael Froman, who led U.S. negotiations for the original TPP agreement under the Obama administration, speaking at the same panel as Mirpuri.

But for some Chinese analysts, conquering these difficulties would be the biggest reason to join.

Just as when China entered the World Trade Organization (WTO) in 2001, the country can use the pressure created by negotiations to force through domestic reforms, said Chen Fengying, former head of the Institute of World Economic Studies at the China Institutes of Contemporary International Relations. “This process is like a bitter pill — perhaps you can’t make yourself swallow it, but if a doctor makes you, you’ll recover in the end, even if it’s painful in the short term.”

“The direction of CPTPP is the same as the direction of our reforms — this is the most important reason [why China should join],”said Tu Xinquan, the executive dean of the China Institute for WTO Studies at the University of International Business and Economics in Beijing.

Some key requirements of CPTTP dovetail with China’s own reform plans. For example, the principle of “competitive neutrality” — that is, ensuring a fair playing field between SOEs, private businesses, and foreign businesses — was mentioned at China’s most important annual policy document in March.

Getting other members on board

China’s huge market would also give it significant bargaining power in negotiations, Menon said. Japan, possibly the most important signatory, could stand to gain significantly. With China as a member, CPTPP would increase the value of Japan’s exports by $283 billion by 2030, compared to just $97 billion without it, according to the PIIE report.

China’s joining CPTPP to a large extent will depend on its market reforms and opening-up, according to Kiyoyuki Seguchi, a researcher at The Canon Institute for Global Studies in Japan. “If China wishes to continue to make new strides, then Japan would be happy to provide it the platform of CPTPP to broadcast [this positive message]” he said, citing China’s recently fast-tracked Foreign Investment Law as an example of how the U.S.-China trade war has pushed China to make important changes.

Reforms might not all have to happen at once — China could use measures like transition periods, phased goals and pilot programs in free-trade zones, according to Su Qingyi, deputy director of international trade at the Chinese Academy of Social Sciences’ Institute of World Economics and Politics.

Some CPTPP members still hope that the U.S. may return to the table someday, according to Toshiya Tsugami, a fellow at the Japan Institute of International Affairs. But if China joined, this would be much more unlikely, he said.

“The idea of China joining the CPTPP is very attractive. But the question then becomes, will the U.S. join the CPTPP?” said Ambassador Mirpuri at the January panel.

Trump suggested in April 2018 that the U.S. could rejoin the CPTPP, if it were revised to be “substantially better.” There have been no significant moves made since then though, with the Trump administration focusing on bilateral deals instead.

Just the fact that CPTPP countries are weighing which of the world’s two largest economies might end up joining shows how far the idea of the trade agreement has changed since its inception. As Rudd noted in a speech in December, China joining the deal would be “supremely ironic.” After all, it was originally conceived by the previous U.S. administration as part of a pivot to Asia — a change intended in part to counter China’s rising influence in the region.