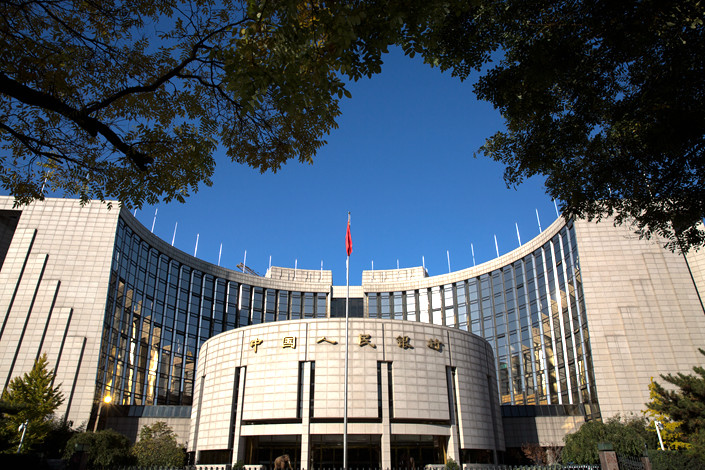 Headquarters of the People's Bank of China in Beijing on Jan. 26. Photo: IC

(Beijing) — China’s central bank has emphasized the importance of keeping growth of the money supply under control as the economy has improved, dimming market expectations that it will soon cut the amount of money banks have to hold in reserve.

The language about the money supply was a new addition to the latest report on the quarterly meeting of the People’s Bank of China’s (PBOC) Monetary Policy Committee, which is chaired by central bank Governor Yi Gang.

Like it had in its report on its previous meeting, the committee also said that monetary policy should neither be too tight nor too loose and that ample liquidity should be maintained, according to the report, released Monday.

The emphasis on keeping the money supply under control means that implementation of monetary policy is going to tighten marginally, Ming Ming, an analyst with Citic Securities Co. Ltd., said in a note on Tuesday.

The meeting came after China’s total social financing, a broad measure of credit and liquidity in the economy, reported a 2.86 trillion yuan ($426 billion) net increase in March, compared with a net increase of 703 billion yuan in February. The data suggest that credit growth may now be bottoming out due to the central bank’s effort to loosen monetary conditions, Chang Liu, an economist with research firm Capital Economics, said in a note.

The report also noted that China’s economy was growing in a healthy manner. “The prudent monetary policy reflected the need to carry out countercyclical adjustment,” the report said.

Countercyclical adjustment means to tighten monetary policy when economic conditions are good and loosen it when they are bad.

The committee noted that the economywide leverage ratio was stabilizing, risk controls were working and that financial sector was serving the real economy.

The report also said the authorities will improve the structure of the financial system to better serve small and micro enterprises and the country’s agricultural sector.

With 366.5 billion yuan worth of loans from the PBOC’s medium-term lending facility maturing on Wednesday and many enterprises preparing to pay taxes in April, the market has been anticipating that monetary policymakers would cut the reserve requirement ratio (RRR), which determines how much money banks have to set aside as reserves at the central bank. Rumor had it that the central bank would cut the RRR this month, but the central bank has denied this.

The necessity to lower the RRR in the near future has lessened, Sheng Songcheng, former head of the PBOC’s Financial Survey and Statistics Department, said in a column Monday.

Whether there will be another RRR cut this year depends on the state of the economy in the late second quarter, taking into account inflation, liquidity and other factors, Wang Yifeng, a former analyst with China Minsheng Bank told Caixin. In the long term, it will still be necessary to lower the RRR rate, considering the limited growth of shadow banking and a decline in China’s yuan funds outstanding for foreign exchange.

The PBOC has cut the RRR five times since January 2018 to ensure sufficient liquidity in the financial system. It made the latest cut in January.