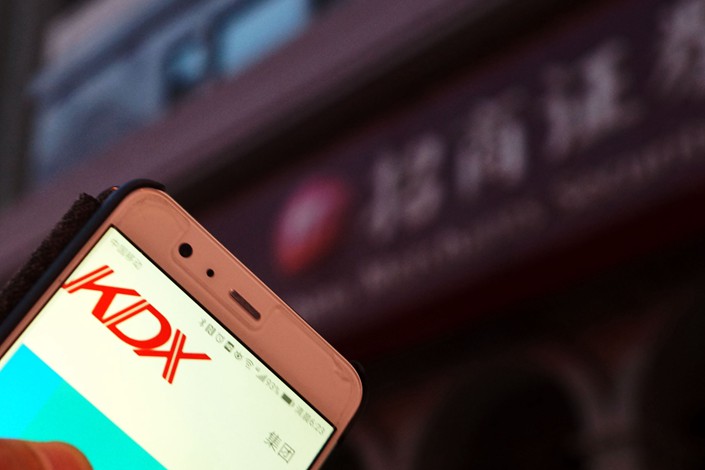 The debt crisis at laminating film manufacturer Kangde Xin Composite Material Group deepened Friday after its overseas subsidiary failed to honor a March commitment to pay $9 million interest on a U.S. dollar bond traded in Hong Kong. Creditors who are owed more than 1 billion yuan ($149 million) between them are also lining up to sue the company to recover their money.

Kangde Xin, based in eastern China’s Jiangsu province, said the unit couldn’t raise sufficient funds to make the payment, putting it formally in breach of contract, according to a statement filed to the Shenzhen Stock Exchange. The three-year $300 million bond matures in March 2020 but interest is paid every six months.

“The company is actively working to raise funds through various channels and is also strengthening its own operations to strive to repay the interest on the offshore bond through its own operating cash flow,” it said. “At the same time, we will make great effort to ensure we meet our obligations on our other debt financing instruments.”

The announcement from the company, whose Shenzhen-listed shares have collapsed 70% over the past year, wasn’t unexpected. It warned investors on March 14 that it might not be able to pay the interest on the due date of March 18 and that a default would be triggered if it couldn’t come up with the money by April 18. Trading in the bonds was suspended on Jan. 16.

Kangde Xin’s troubles don’t stop with the offshore bond default. It has failed to repay more than 2.5 billion yuan of interest-bearing liabilities over the last few months, and creditors including banks are now lining up to sue the company to get their money back. The Shenzhen-listed firm said earlier in the week that it had received notification of 16 new lawsuits since March 19 from institutions who are trying to recover a total of 1.03 billion yuan, 5.72% of its net assets. They include the Jiangsu branch of the Export-Import Bank of China, which says it is owed 251 million yuan, the Zhangjiagang branch of Bank of Communications, which is seeking the return of 152 million yuan, and GF Fund Management Co. Ltd., which is after 169 million yuan.

Local officials in Suzhou, which administers Zhangjiagang, the city where Kangde Xin is headquartered, have stepped in to try and help the company raise funds to relieve its debt pressures, sources in the banking industry have told Caixin. A group of banks were strong-armed into lending it 150 million yuan. “If 150 million yuan was enough to solve this company’s problems, we’d hand it over immediately,” the director of the Suzhou branch of a large commercial bank told Caixin, declining to be further identified.

A proper rescue and restructuring of Kangde Xin would need a third-party auditor who could clarify the company’s accounts and its assets so everyone knows its real financial situation, one institutional investor told Caixin. The people controlling the company have repeatedly misrepresented the true state of affairs, he said.

Kangde Xin was one of three companies singled out by Fitch Ratings in a January report that highlighted problems of governance and disclosure by companies who appeared to have plenty of cash but defaulted on their debt. Its balance sheet showed it had 15 billion yuan of net cash in September 2018, less than four months before it defaulted on 1 billion yuan of “super & short-term commercial paper,” short-term debt issued in the interbank bond market by non-financial companies. The company confirmed to Fitch before the maturity date that its holdings of realizable cash were sufficient to meet its obligations, the ratings agency said.

At a bondholders meeting in January, Zhong Yu, the then chairman and controlling shareholder of the company, offered to personally guarantee its debts, but he resigned in February for “personal reasons.”

Local regulators have told Caixin they are reluctant to bail out troubled companies, warning of the moral hazard involved and the negative signal repeated rescues of untrustworthy enterprises would send to other companies who have got themselves into trouble.